Qatar marked its FIFA World Cup debut with a defeat to Ecuador on Sunday, but in becoming the first nation in the Middle East to host the tournament, it has inspired a wave of pride across the region.

From cafes in Erbil to pubs in Istanbul and stadiums in Gaza City, excited onlookers gathered around television screens ahead of the opening fixture of a tournament some hope will shatter stereotypes of the Islamic world.

At a café in the city of Erbil, the capital of the Kurdish region of northern Iraq, fans new and old sipped tea as they debated the merits of participating teams and reflected on world football’s grandest competition coming to Qatar.

Rasul Farid, 26, said he first watched a World Cup in 2010 when South Africa hosted the finals. 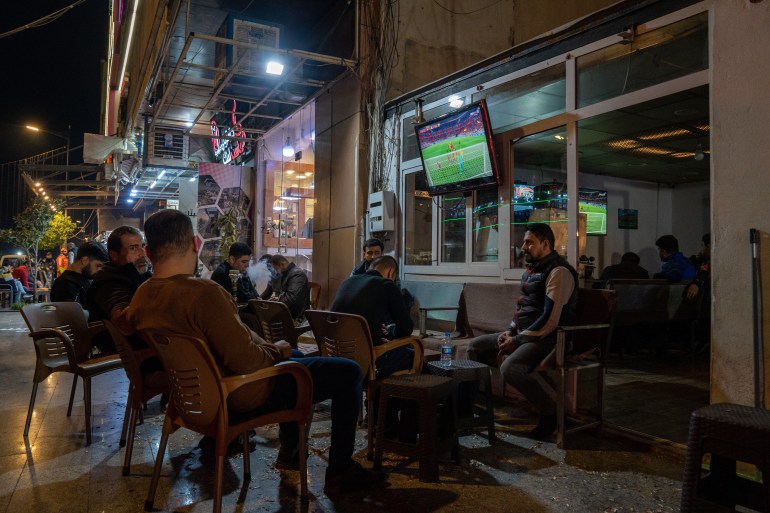 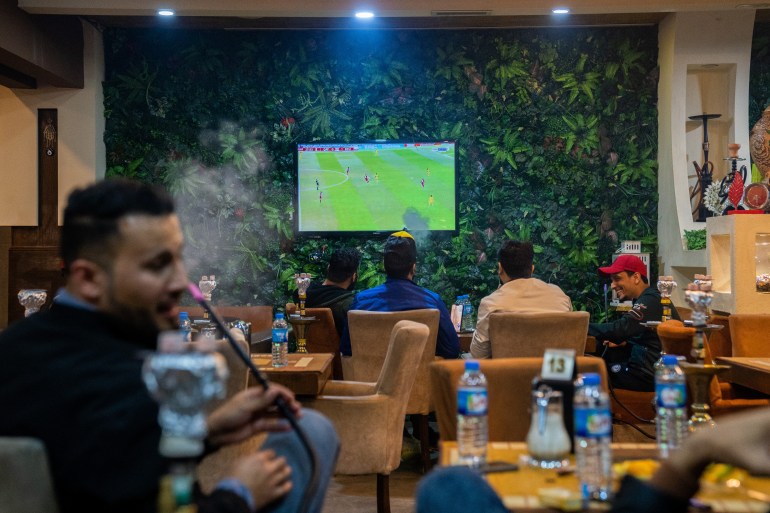 Khalil Ahmed, 29, said he first watched the international football fiesta in 2006 when it was held in Germany.

“I did not think that one day it would be in an Arab country. I thought that the World Cup was only for the West and America – not for us.”

Ali Kareem, 22, watched the opening match in Iskan, a traditional area in Erbil well-known for streaming football matches. His earliest memories of football are from 2007 when Iraq won the Asian Cup and he started celebrating in the streets with his father and friends.

“I love [football], and we are very happy that the World Cup is being held in an Arab country,” he said, adding that he would support Brazil.

In Turkey, football fans geared up to follow this year’s tournament despite the country’s national squad failing to qualify for the 32-team tournament.

In the heart of Istanbul’s buzzing Beyoglu district on Sunday evening, the Corner Irish Pub was packed with football fans watching the introductory match of the World Cup between Qatar and Ecuador. There was a mix of tourists and locals, and most people appeared to be rooting for Ecuador.

“We’ll show all [the matches] throughout the month in English,” Zafer, the pub’s manager, told Al Jazeera, adding that his money was on Argentina to win the cup. Ersoy Ozdem, a veteran sports journalist, told Al Jazeera he would be supporting Argentina during the competition. He said that he believed the World Cup could be held in any country, but noted issues regarding the timing of the competition, coming mid-way through the European club season.

“The World Cup cannot be held in November in my opinion, because we aren’t used to it,” Ozdem said, adding that a particularly high number of players are currently injured and will be unable to play.

Tulay Demir, a Turkish journalist and writer who grew up in the Netherlands, is supporting the Oranje.

“Although I think that Brazil will win the cup, as someone who is half-Dutch I am very happy to know that my country is part of it,” Demir told Al Jazeera. Demir will head to the Netherlands this week and is planning to watch her team face off against Ecuador on Wednesday at her friend’s bar in the town of Dieren.

For Demir, it is very valuable that the World Cup is being held in a Muslim country, but she expressed her concerns regarding the primary controversy that has surrounded the event – the treatment of migrant workers in Qatar. 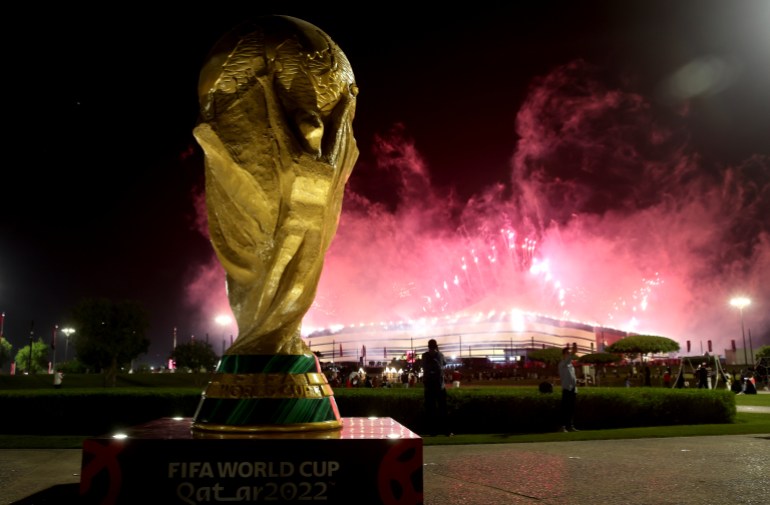 The Guardian newspaper has reported that 6,500 migrant workers from India, Pakistan, Nepal, Bangladesh and Sri Lanka had died in the country since 2010, when Qatar was awarded the World Cup.

The Qatari government has stated that these figures, provided by the respective country’s embassies, included deaths of people not working on World Cup projects.“The mortality rate among these communities is within the expected range for the size and demographics of the population,” it said.

The government said there were 37 deaths between 2014 and 2020 among workers directly linked to the construction of World Cup stadiums, of which three were “work-related”.

“The World Cup being organised in this region is very prestigious, but the deaths of many guest workers have cast a shadow over it,” Demir said.

“The lives lost have greatly damaged Qatar’s image. It had a very good opportunity on its hands, and I don’t think they were able to make good use of it,” she added. 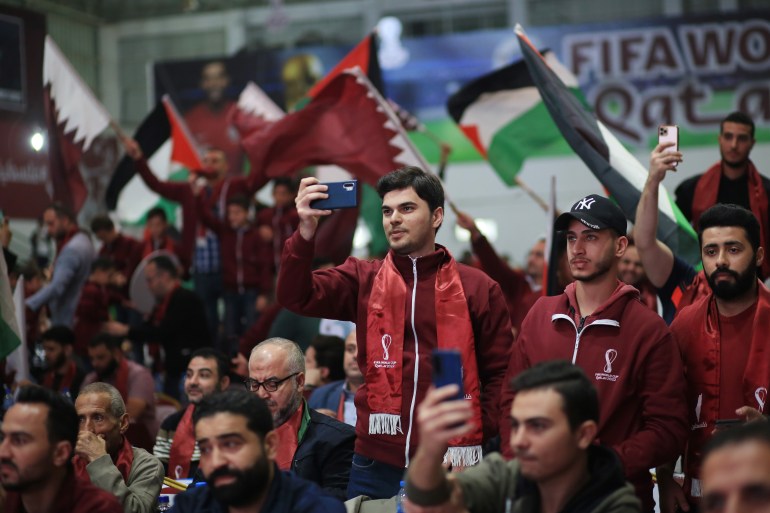 In the besieged Gaza Strip, an opening ceremony was held in Gaza City to mark the first day of the World Cup.

Hundreds of Palestinian fans and athletes gathered in the Palestine Stadium Hall, where the fans raised the Qatari and Palestinian flags amid cheers of support for the Qatari team.

Murad Badr, 42, said he came here today with his children as a fan, an athlete, and a sport enthusiast.

“I have been watching the World Cup since 1994. This is the first year it is hosted by an Arab country, and the hosting is wonderful. The preparations are impressive.”

Badr told Al Jazeera that Qatar has made great efforts in establishing stadiums and infrastructure.

“Today, we came to support Qatar and the rest of the four participating Arab teams: Saudi Arabia, Morocco and Tunisia.”

Abdullah al-Saqqa, 37, a Palestinian national table tennis player, told Al Jazeera that he was lucky to have visited Qatar three times before.

“From 2006 to 2022, between these years, there has been a quantum leap in the State of Qatar. Qatar is proving itself – its Emir, its government, and its people,” al-Saqqa said.

“Everyone sees that Qatar deserves this coronation and can deliver a message to the world that we, as Arabs and Muslims, are able to be on the side of the super international powers.” 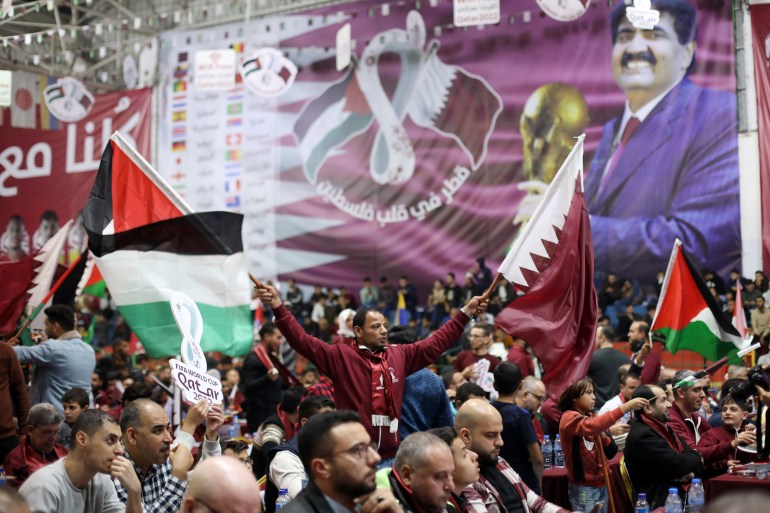 Shahd Salouha, 23, was following the opening activities of the World Cup with great interest.

“I am so passionate about football that I listen to the matches on the radio if the electricity is cut off in my house. Sometimes, I look for a place outside the house so as not to miss matches,” she said.

Salouha says her favourite national team is Brazil, but she also likes Spain and Germany.

“I have been following the preparations for the World Cup for a whole year, and everything I see is very impressive. The museums, stadiums, and preparations are great,” she said.

“This is a source of pride for all of us as Arabs, and it gives us a sense of pride that this is an Arab and Muslim country with such great capabilities.”

Salouha also expressed her gratitude for Qatar’s supportive role in the Gaza Strip.

“It is known that Qatar is one of the most supportive countries for Gaza, so they have all the love and respect, and it is a great country in word and deed.”