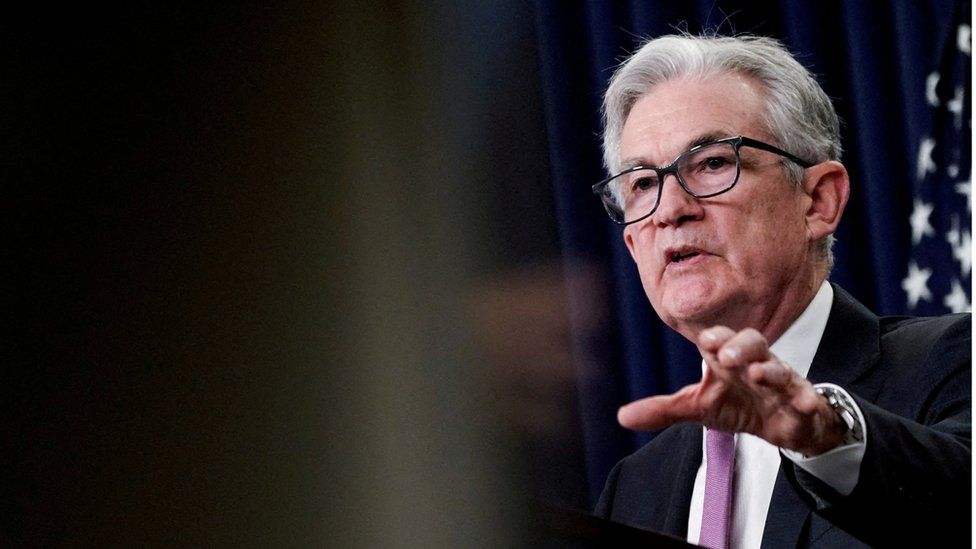 Jerome Powell, head of the Federal Reserve, says inflation in the US is too high

The US central bank has pushed interest rates to the highest level in almost 15 years as it fights to rein in soaring prices in the world's largest economy.

The Federal Reserve announced it was raising its key rate by another 0.75 percentage points, lifting the target range to 3% to 3.25%.

Borrowing costs are expected to climb more - and remain high, the bank said.

The move comes despite mounting concern that the cost of controlling inflation could be a harsh economic downturn.

Federal Reserve chairman Jerome Powell has said the rate rises are necessary to slow demand, easing the pressures putting up prices and avoiding long-term damage to the economy.

Banks in nearly every country - with the big exceptions of Japan and China - are taking similar steps as they wrestle with their own inflation problems.

The Bank of England is widely expected to announce its seventh consecutive rate rise at its meeting on Thursday, while Indonesia and the Philippines are among the other countries also poised for increases.

Analysts are starting to worry that the global sweep of the rate hikes, which ripple out to the public in the form of more expensive mortgages, loans and credit card debt, could lead to greater economic slowdown than policymakers expect.

"That is definitely one of the downside risks - that the synchronised nature of the tightening could make it that much more powerful," said Brian Coulton, chief economist at Fitch Ratings.

How much will interest rates go up?

In the US, the Fed is raising rates at one of the fastest paces in its modern history, a sharp reversal after years of low borrowing costs.

Wednesday's increase - the fifth in a row - lifts the rate the Fed charges banks to borrow from near zero at the start of the year to 3% for the first time since early 2008.

Forecasts released by the Fed on Wednesday show policymakers expect it to reach 4.4% by the end of the year - and rise to 4.6% in 2023, sharply higher than its prior forecasts.

"What is striking is the speed,"Mr Coulton said. "They're having to move very quickly ... and it means it's more likely to be a surprise to firms and households."

Sean is scrapping holiday plans, uncertain what the economy may bring

New Yorker Sean V said he felt lucky that he bought a two-bedroom condo last year, before borrowing costs started their climb, locking in a mortgage rate around 2.6%.

But the 30-year-old works in the home loan industry, which has seen business plunge as mortgage rates cross 6% for the first time since 2008.

He said he feared losing his job "every single day" and was cutting back spending and scrapping holiday plans amid the uncertainty.

"I don't know how stalling the economy is helping anyone."

By raising borrowing costs for businesses and households, central banks intend to reduce demand for big-ticket items like cars, homes or business expansions, which should ease the pressures pushing up prices.

But it also means less economic activity, which typically leads to job losses and other economic pain.

Even if it avoids the two quarters of contraction that typically define a recession, the 2023 world economy is expected to be at its weakest in more than a decade, excepting the 2020 pandemic year, said Ben May, director of global macro research at Oxford Economics.

"What has become clear is that if given the choice between allowing inflation to remain high for a sustained period .... or pushing the economy into a recession, [central bank leaders] would rather push the economy into recession and get inflation back towards target," he said.

Will rate rises lead to a recession?

Forecasts released by the Fed show policymakers expect growth in the US to slow to a crawl this year, to 0.2%. They see growth picking up to 1.2% next year, but predict the unemployment rate will rise to 4.4%.

The forecasts do not show inflation returning to the bank's 2% target until 2025.

Many analysts are forecasting a recession in the US next year but remain hopeful it will be relatively mild, noting that household finances are in better shape than in prior downturns.

But the war in Ukraine and concerns about energy supplies raise the risks, JP Morgan Chase boss Jamie Dimon warned lawmakers at a congressional hearing on Wednesday.

"There's a chance - not a big chance - a small chance, of a soft landing, there is a chance of a mild recession, a chance of a harder recession. And because of the war in Ukraine... and the uncertainty that causes in the global energy supply and food supply, there's a chance could be worse," he said. "I think policymakers should be prepared for the worst."