On a Tuesday night in mid-April, Shantanu Deshpande’s phone buzzed. A friend’s mother, infected with the coronavirus, was in urgent need of hospital treatment as a plunge in her blood oxygen level threatened her life.

With India’s health system – where it exists – at a breaking point because of the surge in COVID-19 cases, no beds were available. Two hospitals had turned her away

Deshpande – founder and chief executive of The Bombay Shaving Company which sells grooming products online – and some of his family and friends began calling hospitals and contacts to search for a facility that would treat his friend’s mother.

Having survived the night on an ambulance’s oxygen supply as it raced around the city, she was finally admitted to a large government facility at 6:30am. Many other sufferers have not been so lucky.

Since that harrowing experience, Deshpande has deployed several members of his customer services team to help patients in critical condition during India’s COVID-19 crisis.

He is not alone.

As government services collapse, small businesses, startups, non-profit organisations and individuals have stepped in to try and plug some of the many gaps in public healthcare and support services. They help by calling up hospitals and oxygen suppliers, raising funds to buy oxygen concentrators and even working with home chefs to deliver food to families with COVID-19 sufferers.

In addition to searching for hospital beds, Deshpande and his team have also been coordinating with government-registered suppliers of the critical drug, remdesivir, helping to find oxygen cylinders and refills and uploading the information to a database.

He also runs a free oxygen cylinder relay service from his home. As case numbers surged in April, he bought four cylinders, each with enough oxygen for four hours.

Despite his best efforts, Deshpande is frustrated by how difficult it has been to narrow the yawning gap between demand and supply. “This is so complex and so hard to make sense of,” he says, “so you do what you can.”

With more than 300,000 new COVID-19 infections a day for more than 10 days, India has more than 20 million cases, the second-highest number in the world behind the United States, and more than 200,000 dead.

The spiralling numbers have overwhelmed the country’s creaking healthcare system, leaving millions scrambling for medicines, oxygen cylinders and beds. Frightened citizens are scooping up whatever limited supplies they can get their hands on, driving up prices of basic commodities in the process and putting them out of reach of most Indians, when they are available.

This second wave of infections will likely be less disruptive for economic growth than the first one last year as lockdowns to control the spread of the virus are localised, as opposed to the sudden nationwide shutdown ordered by the government on March 24, 2020, according to India Ratings and Research, a unit of the Fitch rating agency, in a report emailed to Al Jazeera. It has lowered its forecast for the current year’s economic growth to 10.1 percent from 10.4 percent. 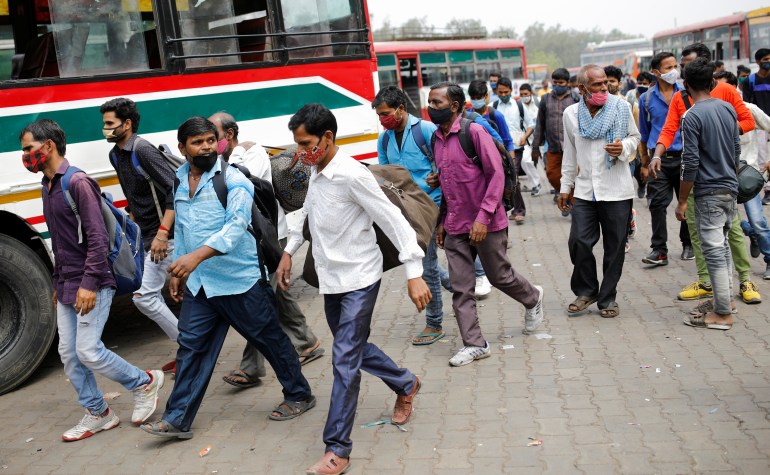 A rise in infections and localised lockdowns are driving migrant workers back home [File: Adnan Abidi/Reuters] (Reuters)But the country’s job market is already feeling the effects of the surge in cases. India’s unemployment rate rose to a four-month high of 7.9 percent in April from 6.5 percent the month before, according to data from the Centre for Monitoring Indian Economy, a research firm.

Meanwhile, some who are fortunate enough to have resources or know-how, are using them to help others cope with the crisis.

Among them is Deshpande’s sister-in-law Ayushi Gudwani, founder and chief executive of FableStreet, which makes premium workwear for women. After that April night of making calls to hospitals, Gudwani created a group with friends from her business school also to verify leads for emergency medical resources.

The all-women network has about 50 members who divided themselves into subgroups to tackle various requests – such as those for beds, home intensive-care setups and oxygen – and to scour for locations for COVID-19 tests, as practically all laboratories across New Delhi are severely backed up.

Then there is Swasth (Hindi for health) an alliance of about 150 healthcare and related organisations, including hospital chains, health nonprofits as well as online pharmacy startups such as 1mg, which was set up last year when the pandemic started. Initially the group focused on providing telemedicine and home monitoring services.

Between October and February, Swasth worked on getting oxygen concentrators to hard-to-reach rural areas across seven states, including hotspots where urban fighters known as Naxals are active in Gadchiroli district in the state of Maharashtra. Now it is sending those concentrators to wherever the need is the most acute, based on death rates.

One of the biggest barriers for those seeking help is easy access to comprehensive information.

Swasth is trying to resolve that issue by creating a central database of verified information for everything from hospital beds and oxygen cylinders and concentrators to medicines and ambulances. It wants to centralise databases created by groups such as Deshpande and his team at The Bombay Shaving Company.

The result is the crowd-sourced liferesources.in website, where information is available in 11 local languages and a WhatsApp number (+91-80619-33193) users can reach for services in 14 languages. WhatsApp engineers helped develop the chatbot for Swasth, the alliance says.

Volunteers are key to ensuring information is accurate and updated.

That is a service Ramya Venkataraman is hoping to provide through her teacher certification company, CENTA, which works with 250,000 educators across the country who are fluent in multiple languages.

In the 24 hours since she floated the idea late last month and asked if anyone wanted to volunteer an hour of their day to make phone calls to hospitals and blood banks to chase and confirm information that can be fed into databases, 1,000 teachers signed up and she hopes to reach a target of 10,000 volunteers within the next few days, Venkataraman told Al Jazeera.

Meanwhile, the Hemkunt Foundation, a nonprofit, has shifted its focus from feeding migrant workers and poor people who have been hit by COVID-19 to fundraising and buying oxygen cylinders and concentrators. Demand for these items has skyrocketed to 15,000 requests a day on average, up from barely 100 a month earlier, says the group’s Community Development Director Harteerath Singh. 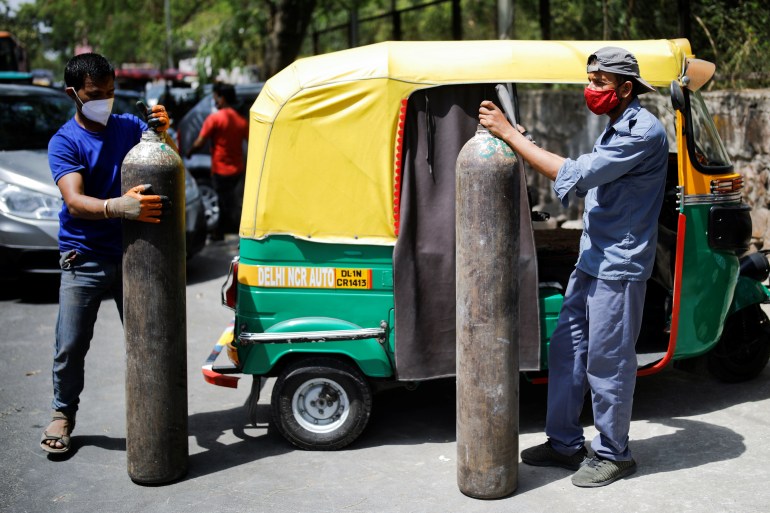 The COVID outbreak has left patients scrambling for oxygen [File: Adnan Abidi/Reuters] (Reuters)In recent days, the foundation has raised 150 million rupees ($2m), money it spent to buy about 2,300 oxygen concentrators that it will be donating across the country even as it looks to raise more funds for the next batch of oxygen cylinders and concentrators.

Apart from money, the foundation is being supported in its work in other ways. Indian billionaire Anand Mahindra’s automotive business has given the group sports utility vehicles to take their volunteers across New Delhi as they chase down or deliver cylinders and concentrators. The team is staying in rooms provided by budget hotel chain Treebo Hotels.

Funds apart, the bigger problem is supplies, says Hemkunt Foundation’s Singh. With China shutting down this week to commemorate May Day, he told Al Jazeera: “It’s delaying stuff for us.”

Singh had planned to buy concentrators from Iran and even prepared the paperwork for the acquisition but scrapped it at the last minute out of concern that there may be a geopolitical backlash against doing business with Iran, he says. Now he is scouting around for other suppliers.

There are also platforms working with home chefs to make food for those left too weak by the virus to be able to cook. 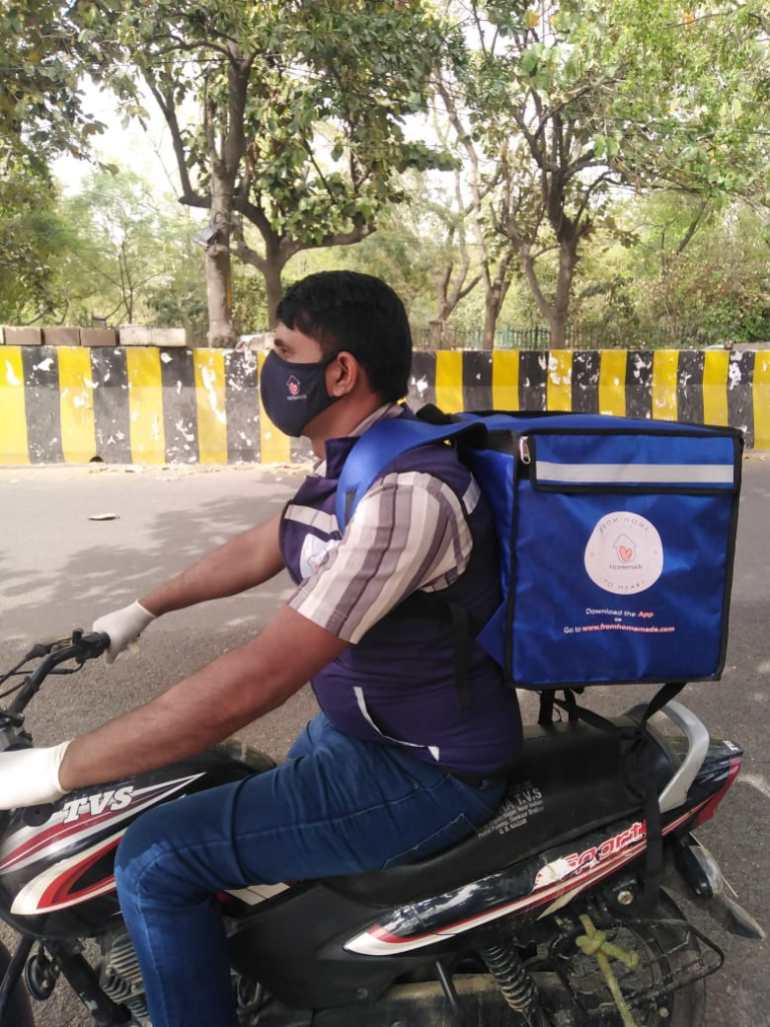 Homemade founder has hired riders to deliver food to COVID-hit families. [File: Picture courtesy Homemade]Nischal Kapoor had been gearing up for a May launch of his startup, Homemade, that offers homemakers an e-commerce platform to sell a range of products from food and fashion to home decor, plants and planters. As the pandemic raged in April, he asked the home chefs he had already brought on board if they would like to cook and sell food at cost price to COVID-hit families. About 200 signed up in New Delhi and the neighbouring cities of Noida and Gurgaon. The company is averaging about 200 deliveries a day in Noida, Kapoor told Al Jazeera.

Similarly, in January, Akshay Puljal launched Upwan Agritech Pvt Ltd, a startup he co-founded with two others to sell ready-to-cook food under the Quikish brand targeting working people. When the second wave took hold, Puljal came up with a ready-to-cook one pot meal – a combination of rice, lentils and vegetables. Families struggling with COVID-19 receive the first two orders for free.

“During the first wave some of our relatives were hit by COVID and had to order food from outside and we realised it wasn’t the hygiene standard that we would’ve wanted,” Puljal told Al Jazeera.

That led Quikish to create its one-pot meals so families could cook at home and eat fresh, hygienic food, he says. Within days of its launch, he received 100 orders over a weekend.

Puljal had two surprising takeaways from his experience: Many families insisted on paying for the food, saying that he should give it for free to those who can not afford to pay and many of his customers were old people who were stuck alone at home and were too frightened to go out to shop for food and groceries.