The Philippines’s Hidilyn Diaz has won the women’s 55-kilogramme (121-pound) category for weightlifting at Tokyo 2020 to become the country’s first Olympic gold medallist, igniting celebrations back home among the COVID-19 pandemic-weary population.

By winning the gold, Diaz also ended the Philippines’s 97-year quest for gold at the Olympics. It first participated in the Games in 1924 and has previously won three silvers and seven bronze medals.

“I still can’t believe it,” she told reporters after the event. “I’m even surprised myself that I was able to do it.”

“Thank you so much for believing in me. There were many times that I already wanted to give up because of the many challenges I went through but you were all there for me,” said Diaz.

“I really respect Diaz as an opponent. She did a better job and it’s nice for all the people that were supporting her,” Liao was quoted by news reports as saying. Liao had set a world record 227kg (500.44 lbs) total in the World Championship in 2019.

World boxing champion and Philippine Senator Manny Pacquiao, who is facing another title match in the US, wrote on social media, “We are so proud of you.”

Social media erupted in celebration on Monday night and into Tuesday morning, hailing Diaz, a native of Zamboanga, a city in the southern island of Mindanao, as “a hero”.

Many of Diaz’s supporters and family members have been unable to travel to Tokyo because of the COVID-19 lockdown and restrictions.

“Congratulations, Hidilyn. The entire Filipino nation is proud of you,” he added.

THIS IS OUR MOMENT: #PHI's first-ever #Olympics gold medalist Hidilyn Diaz salutes the Philippine flag as the national anthem Lupang Hinirang is played for the first time in the Games pic.twitter.com/anjaXZ7wFZ

In 2019, the Duterte administration came under fire after it erroneously identified Diaz as part of a group seeking to overthrow the president.

Diaz vehemently denied the allegations but still had to contend with a barrage of personal attacks and abuse online from people sympathetic to Duterte.

Her victory on Monday night eclipsed Duterte’s final State of the Nation Address, which had earlier dominated the news.

News of her victory was also the banner headline in Tuesday’s newspapers, displacing stories about the resurgence of COVID-19 cases due to the Delta variant.

Diaz, who said she would aim to participate at the next Games in Paris, buried her face in her hands and burst into tears before embracing her coaches, then clutched the medallion around her neck. 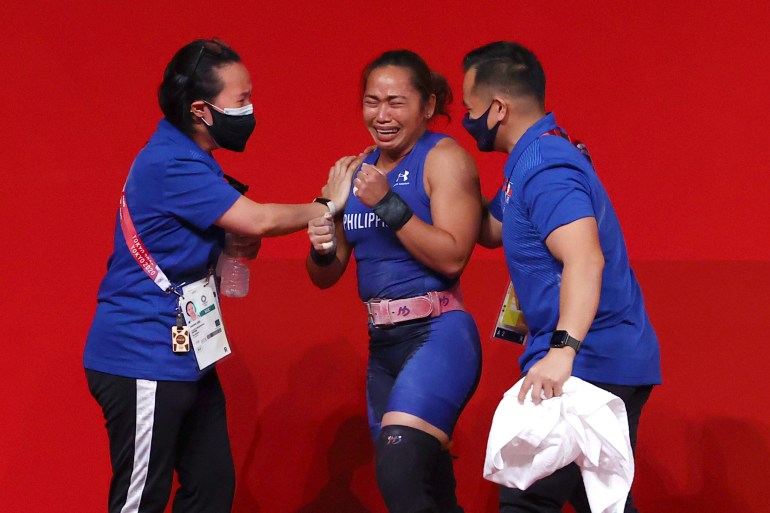 Hidilyn Diaz celebrates with her team after her final lift, which won for her country its first-ever gold in Olympic history [Edgard Garrido/Reuters]

Last year, Diaz found herself stuck in Malaysia, where she had stopped on her way to Peru for an Olympic qualifying event, for about five months after the government introduced a travel ban due to COVID-19. Diaz says she built a gym and trained with water bottles during that time.

As she trained for the Olympics, she also had to appeal online for additional financial support, with limited assistance given by the Philippine government.

A still-tearful Diaz stood to attention and saluted as she belted out her country’s national anthem – the first time it had been played at the podium.