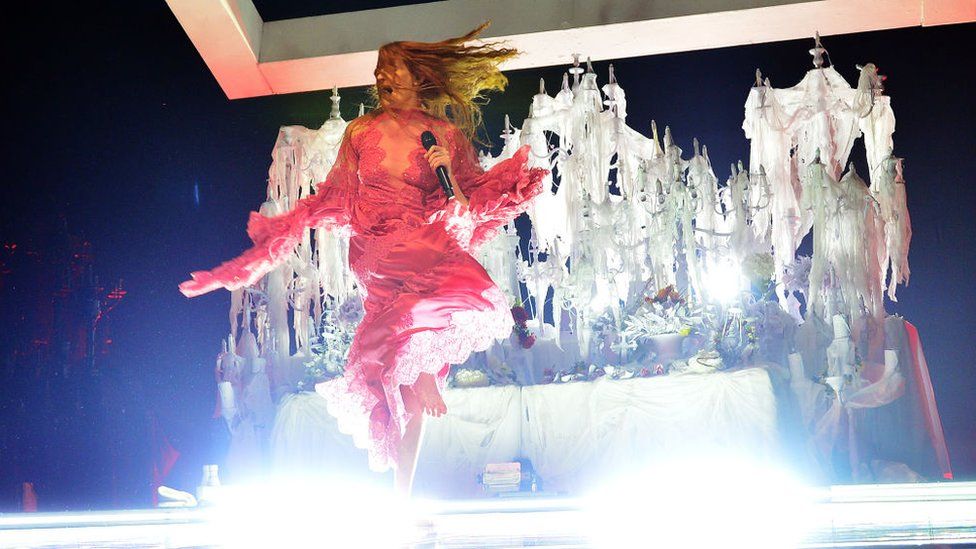 Florence + The Machine have cancelled a UK tour after singer Florence Welch broke her foot on stage on Friday.

The singer was injured on the tour's opening night at London's O2 Arena, but managed to complete her first show.

One fan told the BBC she "kept having to leave to see a medic while they mopped blood off the stage".

After being (incorrectly) reassured that she had not broken a bone, the singer then ran a lap around the O2 during her song Choreomania.

"I'm so sorry to say that after an X-ray it seems I was dancing on a broken foot last night," she told fans, alongside a picture of the blood-spattered stage.

"It is not in my nature to postpone a show, and certainly not a UK tour but I'm in pain and, as dancers know, dancing on an injury is not a good idea."

Welch added that she had "been told not to perform to avoid further damage" and hoped to reschedule the dates in London, Manchester, Birmingham, Leeds, Glasgow, Nottingham and Dublin as soon as possible.

"I love you so much, and I'm so sorry to anyone who is disappointed. My heart is aching. I can't wait to be back on my feet and back in your arms."

The singer, who usually performs barefoot, previously broke the third metatarsal in her right foot while jumping from the stage at the 2015 Coachella Music Festival.

Later that year, she stepped in to replace Foo Fighters at the Glastonbury festival, after frontman Dave Grohl broke his leg in an on-stage accident.

In fact, the athletic nature of live music often results in injuries for stars who either throw themselves into performing a little too hard; or simply miss their step.

Among the most notorious incidents are:

The Queen of Pop suffered whiplash after being pulled backwards down a flight of stairs during a performance at the Brit Awards.

The singer was wearing a cape, which was supposed to detach and be pulled away - but it had been tied too tight and wouldn't come undone.

"My two lovely Japanese dancers, they basically strangled me off the stage. I had two choices, I could either be strangled or fall, and I chose to fall," she later told Jonathan Ross.

At the opening night of U2's Innocence and Experience tour in 2015, The Edge was still unfamiliar with the layout of the band's unconventionally-shaped stage.

That explains how the guitarist managed to casually stroll right off the catwalk and plummet into the security pit during the band's encore in Vancouver.

He later posted a picture of his grazed arm on Instagram saying: "Didn't see the edge, I'm OK!"

(With delicious irony, the song he'd been playing at the time was I Still Haven't Found What I'm Looking For).

It's not a Beyoncé show unless she strokes power pose at the front of the stage while her hair blows magnificently in the wind. This requires at least one, but usually more, industrial-sized fans. And in 2013, it all went wrong.

As the star sang Halo, her tresses became entangled in the blades of the fan, leaving her rooted to the spot. Ever the professional, she kept singing while a security guard unravelled her weave.

Beyoncé later made fun of the incident, posting rewritten lyrics to Halo on her Instagram account: "Gravity can't begin to pull me out of the fan again."

The star nearly came a cropper again at the 2016 Super Bowl, when she missed her footing during a performance with Bruno Mars... but she somehow managed to hop backwards, restabilising herself while making it all look like part of the performance. (You can see the incident about nine minutes into this video)

During Enrique Iglesias's 2015 tour, the Spanish heartthrob sent a drone above the stage to capture video from his audience's point of view.

But while playing in Tijuana, Mexicom the singer saw the drone pass by and decided to reach out and pluck it from the sky, as you might grab a juicy peach from a tree in the orchards of Murcia.

Of course, he was instantly cut to shreds by the propellers.

Determined not to disappoint his fans, however, the singer wrapped his hand in bandages (and, rather gruesomely, drew a heart on his T-shirt in blood) before playing the last 30 minutes of his show.

Afterwards, the star was taken to hospital, where it was discovered he had fractured a finger and needed reconstructive surgery.

While playing Amsterdam's Ziggo Dome in 2017, Metallica frontman James Hetfield managed to fall through a trap door while performing (and I promise I'm not making this up) Now That We're Dead.

Incredibly, the star kept playing as he vanished from view and, after some help from the stage crew, emerged back on stage to finish the song.

But that pales into insignificance compared to the time Hetfield misjudged the placement of a pyrotechnic during a show in the 1990s.

When it went off, he was knocked to the floor, losing half of his hair and all of his guitar strings in the process. On that occasion, the gig was called off.