Formula 1 confirms Portuguese GP as Azerbaijan to have no crowds 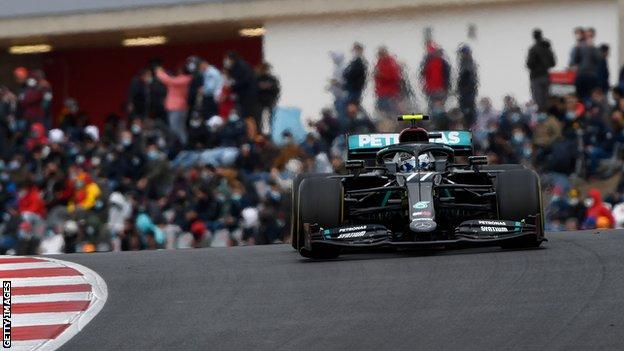 Before last year, the Portuguese GP was last held in 1996

Formula 1 has confirmed the Portuguese Grand Prix will go ahead on 2 May as the third race of the 2021 World Championship.

The sport said Portuguese authorities would decide whether spectators could attend in the coming weeks.

The organisers of the Azerbaijan Grand Prix, from 4-6 June, have said their race will be held behind closed doors.

A statement said the weekend in Baku "has arrived too soon to safely host the event with fans present".

F1 is planning to hold its longest-ever season at 23 races this year.

President Stefano Domenicali said: "We are confident and excited about our 2021 season, having shown last year that we could deliver 17 races safely."

Portugal is on the UK's "red list" of countries that are a heightened risk in the pandemic because of the emergence of new coronavirus variants.

F1 personnel attending the race will not return to the UK within the 10-day restriction period from such countries.

All will travel on to the Spanish Grand Prix, which follows a week later. After that, some will go straight to Monaco, whose race is scheduled for 21 May, while others will remain in Spain until they have gone beyond 10 days since leaving Portugal before returning to the UK.

All F1 personnel are subject to regular testing as part of strict Covid protocols aimed at controlling the virus.

As with other so-called 'elite' sports, F1 has maintained its 'elite-sport exemption' from immigration restrictions during the pandemic.

However, personnel are still restricted to travelling only between their homes and their places of work during a defined period upon returning to the UK.

Portugal returned to the F1 calendar last year for the first time since 1996 as the sport sought to construct a largely European-based calendar in the pandemic.

The event, at the undulating Portimao track on the Algarve, proved popular and the sport has returned after gaps opened up early in the season as a result of the postponement of the Australian and Chinese races because of immigration restrictions in those countries.

Australia has been moved to November but there is, as yet, no place for China.