Clashes broke out at a rally of the banned TLP group which is demanding the release of its imprisoned leader.

Four Pakistani police officers were killed and hundreds wounded when armed activists from a banned group clashed with security forces at an anti-blasphemy demonstration near the eastern city of Lahore, officials said.

The clashes broke out on Wednesday at a rally of the banned far-right Tehreek-e-Labbaik Pakistan (TLP) party on a highway in Sheikhupura, just outside Lahore, as the group prepared to march on the capital Islamabad, a spokesman for the Punjab police said.

The TLP is protesting against the detention of its leader Saad Rizvi, arrested in April when the group was outlawed by authorities, and is demanding the expulsion of France’s ambassador for the publication of a series of caricatures depicting the Prophet Muhammad by a French satirical magazine.

Earlier, Sajid Saifi, a spokesman for Rizvi, said two TLP supporters died when police opened fire at the rally in Sadhuke. Police said they were not aware of any deaths among demonstrators.

However, the police said more than 200 supporters of the TLP party were detained in a crackdown aimed at containing the spread of violence to other parts of the province. 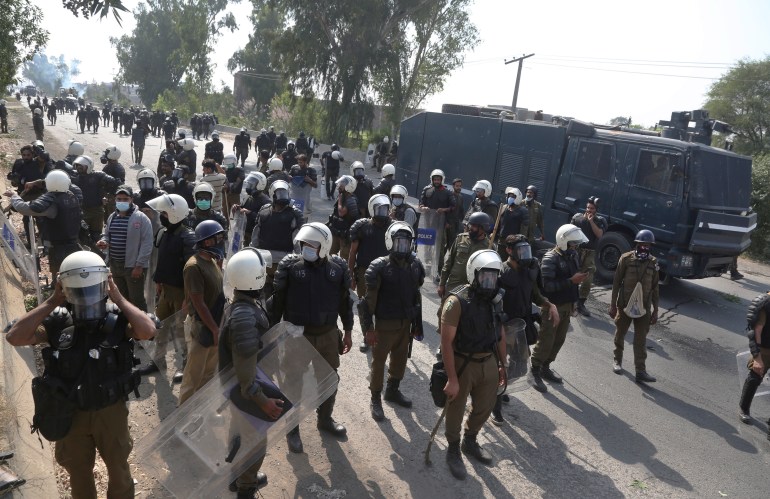 After days of tension, including a clash last week in which three police officers were killed, the interior ministry on Wednesday ordered paramilitary rangers to be deployed under anti-terrorism laws.

“They will be there for 60 days. I have given them authority that they could go to anywhere they want in Punjab,” Interior Minister Sheikh Rasheed Ahmad told reporters.

“I’m still warning the TLP to please back off.”

Pakistani Information Minister Fawad Chaudhry said the government would use force to block the TLP activists from entering the capital, Islamabad.

“We have shown restraint so far but the challenge to the state’s authority can’t be tolerated anymore,” he told reporters.

“The government will no longer treat the TLP as a political entity. Instead, we will treat it as a militant group. It has already been declared a proscribed organisation,” Chaudhry said. 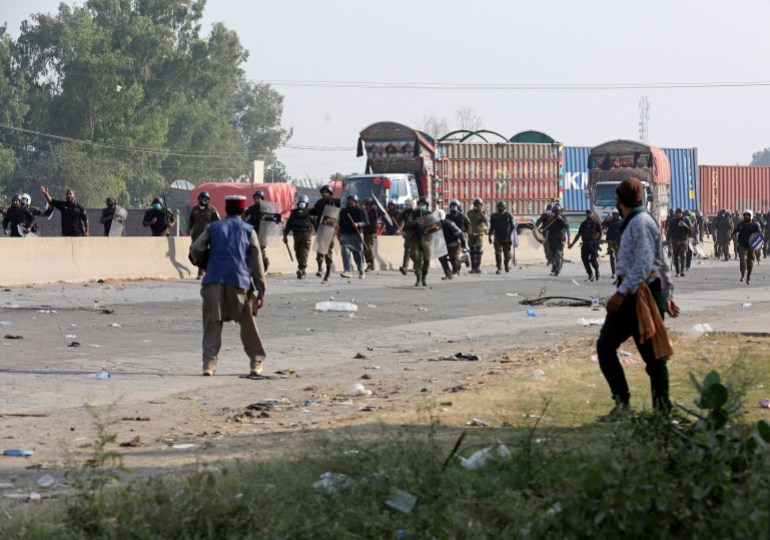 Districts along the Grand Trunk Road were brought to a standstill where the city administration had already placed shipping containers to block entry and exit routes.

The government earlier this week announced a breakthrough in talks with the TLP, but the march resumed on Wednesday.

“We tried our best for the success of the talks but the government is not serious about fulfilling its commitments,” TLP spokesman Saifi said.

“The expulsion of the French ambassador is our main demand.”

It is the group’s third countrywide protest campaign since 2017 over caricatures that are considered deeply insulting by Muslims.

The French magazine Charlie Hebdo first published the cartoons in 2006 and republished them last year to mark the opening of a trial over a deadly attack on its offices in Paris by gunmen in 2015.