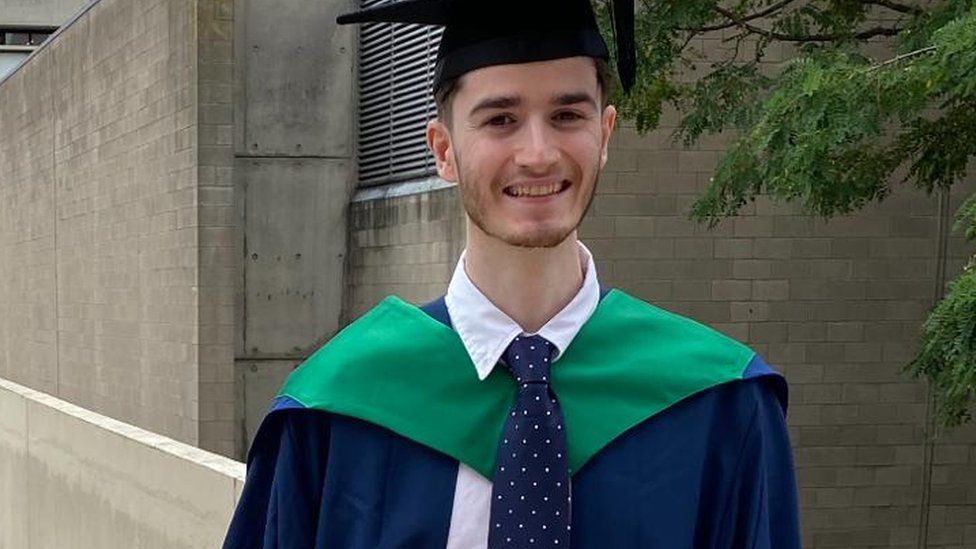 FTX users have described feeling "hopeful" after withdrawals on the cryptocurrency exchange have appeared to restart.

Bitcoin touched a two-year low after the Binance pulled out of a deal to rescue its smaller rival, FTX.

The exchange, used to buy and sell digital tokens, is still advising customers not to make deposits.

According to Coindesk and reports from users on social media, the troubled platform has allowed some customers to withdraw funds for the first time in days.

Thomas, a 22-year-old from Kingston, has been an FTX customer for more than a year, and describes it as a "hub for crypto".

He says he was able to lodge a withdrawal request for £2,000 he held on the exchange, which he describes as a "really significant amount of money".

But he says he has concerns around the volume of requests made by FTX customers, and is not sure whether or not they will all be serviced as the company battles on.

On Thursday, Bitcoin fell below $16,000 (£14,049) for the first time since 2020. Investor confidence was hit by the news that Binance had scrapped its deal to buy FTX, citing concerns over due diligence.

There are also fears of further crypto market volatility if FTX goes bust.

"I thought FTX was safe", another customer told the BBC earlier on Thursday.

Binance said reports of "mishandled customer funds and alleged US agency investigations" had swayed its decision not to buy FTX.

The Reuters news agency reported that the US Securities and Exchange Commission (SEC) was investigating FTX's handling of customer funds and its crypto-lending activities.

The markets regulator is also examining whether the platform has broken laws with regards to how it has handled customer assets.

Binance said in a statement posted on Twitter that the issues facing FTX were "beyond our control or ability to help".

"Every time a major player in an industry fails, retail consumers will suffer. We have seen over the last several years that the crypto ecosystem is becoming more resilient and we believe in time that outliers that misuse user funds will be weeded out by the free market."

FTX's founder Sam Bankman-Fried and Binance's chief executive Changpeng "CZ" Zhao are two of the most powerful people in the cryptocurrency market and high-profile rivals.

The pressure on FTX came in part from Mr Zhao, who had tweeted on Sunday that Binance would sell its holdings of FTX's digital token, known as FTT. The token has lost around 90% of its value this week.

Binance stepped in on Tuesday, saying it had signed a letter of intent to buy FTX's non-US unit. But it added it had "the discretion to pull out from the deal at any time".

As well as Bitcoin dropping on the news, shares in the cryptocurrency exchange Coinbase fell by more than 9.5%.

Meanwhile, venture capital firm Sequoia Capital said it will completely write off its more than $210m investment in FTX, as the cryptocurrency exchange is at risk of bankruptcy.

"Based on our current understanding, we are marking our investment down to $0," the company said in a statement posted on Twitter.

April Joyner, a correspondent at Business Insider in New York, told the BBC's Today programme the problems at FTX could be quite serious.

"If FTX were to go under a lot of people could potentially lose their money depending on what's going on there," she said.

A notice on its website still reads: "FTX is currently unable to process withdrawals. We strongly advise against depositing."

"It's also led to a lot of turmoil on crypto markets - we've seen prices of Bitcoin, Etherium etc fall and so there's a lot of distress and worries about the crypto markets right now," Ms Joyner added.

Ms Joyner said the "different players" in cryptocurrency firms were "very enmeshed" with each other which meant "if one entity has some sort of weakness it can bring down a lot of other players".

There is a growing list of cryptocurrency businesses that have failed because of a lack of cash reserves.

Adding to the pressure, the SEC and other regulators have been ratcheting up scrutiny of the industry as concerns grow about how crypto platforms are trading.

Earlier this year, a subsidiary of crypto firm BlockFi agreed to pay a record penalty to settle charges related to its retail lending product.