Stars are speaking out after the Supreme Court ruled Friday that Americans no longer have a constitutional right to abortion, a watershed decision that overturned Roe v. Wade and erased reproductive rights in place for nearly five decades.

In the court's most closely watched and controversial case in years, a majority of the justices held that the right to end a pregnancy was not found in the text of the Constitution nor the nation's history. Associate Justice Samuel Alito wrote the opinion for a 6-3 majority.

The decision instantly shifts the focus of one of the nation's most divisive issues to state capitals: Republican lawmakers are set to ban abortion in about half the states while Democratic-led states are likely to reinforce protections for the procedure. Access to abortion, in other words, will depend almost entirely on where a person lives. 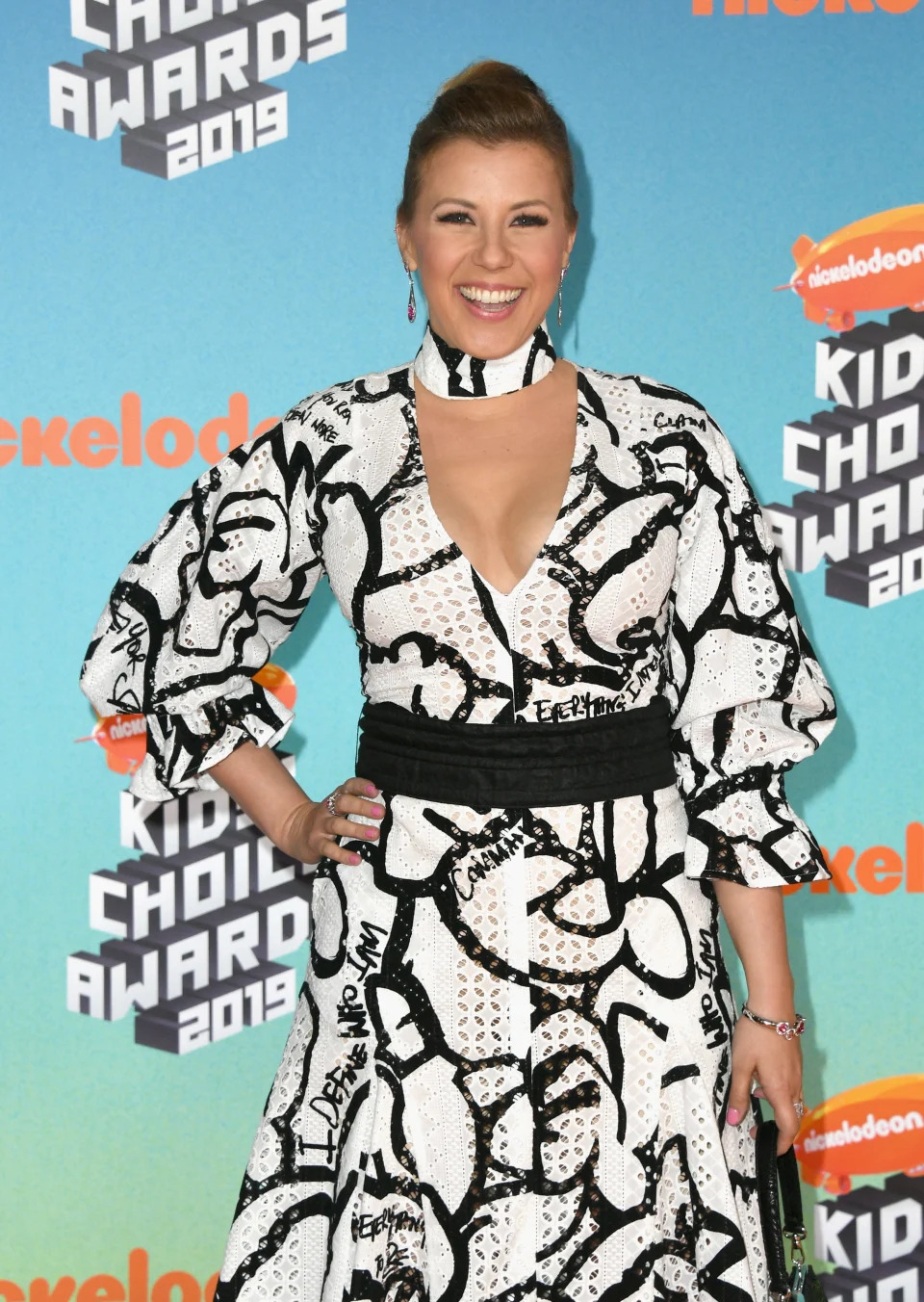 "Full House" star Jodie Sweetin attended an abortion rights protest in Los Angeles following the reversal of Roe v. Wade and was thrown by police, according to NBC News and People.

It was captured on video by Michael Ade, a photographer, who posted the incident on Instagram. "It pained me to see @JodieSweetin thrown to the ground by members of the LAPD as she was trying to lead a group of peaceful protestors away from the freeway…" Ade captioned the video.

The video shows a woman dressed in black with a megaphone being shoved by police to the pavement. According to NBC News, Sweetin's publicist confirmed she was the person in the video.

In a statement regarding the incident, per NBC News and People, Sweetin said she will "continue fighting for our rights."

"I’m extremely proud of the hundreds of people who showed up yesterday to exercise their First Amendment rights and take immediate action to peacefully protest the giant injustices that have been delivered from our Supreme Court," Sweetin said. ""Our activism will continue until our voices are heard and action is taken. This will not deter us, we will continue fighting for our rights. We are not free until ALL of us are free." 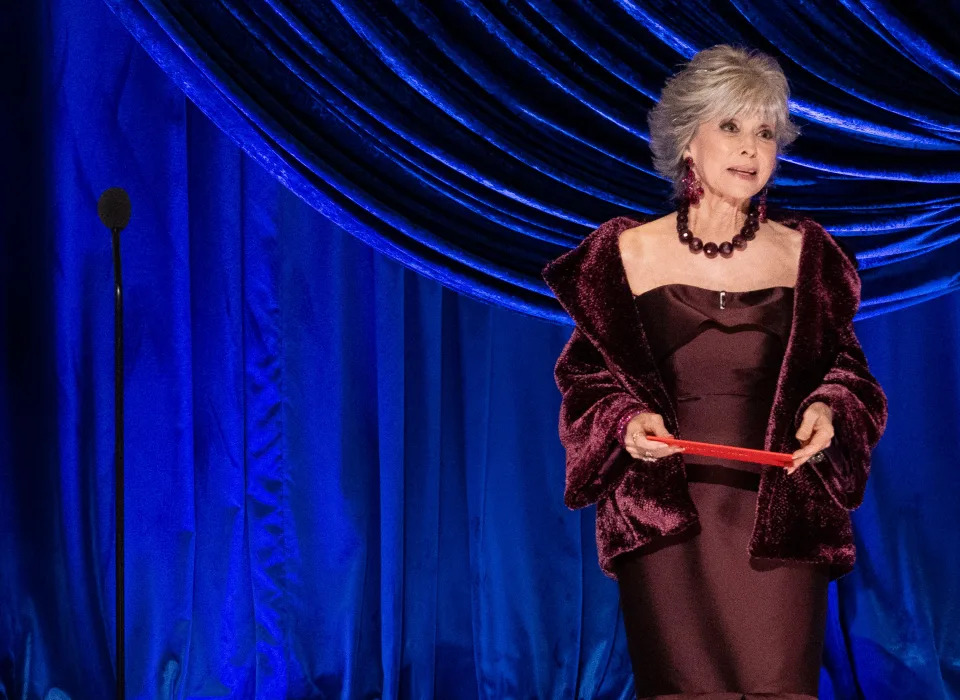 Rita Moreno discussed her abortion before Roe v. Wade and why she is "frightened" by the overturn.

Rita Moreno discussed her botched abortion after she became pregnant while dating Marlon Brando in the years before Roe V. Wade. “Marlon found a doctor through some friends," Moreno, 90, told Variety. "He was a real doctor — Marlon paid him $500 — as opposed to something in a back alley."

Soon after returning home from the hospital, the "West Side Story" alum said she began to heavily bleed. The couple sought medical treatment where doctors told Moreno she had a "disturbed pregnancy."

"The doctor didn’t do anything really, except make me bleed. In other words, he didn’t do it right. I didn’t know it then, but I could have died," she said. "What a mess. What a dreadful mess.”

Reacting to the overturn, Moreno told the outlet: “I can see that thing happening now and going back to back alleys. I’m really nervous and frightened and horrified that this is taking place. I can’t believe that some of those people are telling us what to do with our bodies.”

The actress noted that even though the decision has made her "depressed," she's prepared to mobilize. "We loud mouths are going to have to get busy," Moreno said. “There are many of us. I’m thinking what are we going to do about this? If anything, this has reactivated us."

Michelle Obama says 'channel your frustration and anger into action'

Michelle Obama wrote in a statement Friday that she is "heartbroken" that the U.S. is returning to the "painful lessons of a time before Roe was made law of the land."

"So yes, I am heartbroken – for the teenage girl, full of zest and promise, who won't be able to finish school or live the life she wants because her state controls her reproductive decisions; for the mother of a nonviable pregnancy who is now forced to bring that pregnancy to term; for the parents watching their child's future evaporate before their very eyes; for the health care workers who can no longer help them without risking jail time," wrote the former first lady on social media.

Obama called on others to "channel your frustration and anger into action by getting involved," sharing resources for Planned Parenthood and The United State of Women Reproductive Justice Hub.

"Our hearts may be broken today, but tomorrow, we've got to get up and find the courage to keep working towards creating the more just America we all deserve," she concluded. "We have so much left to push for, to rally for, to speak for – and I know we can do this together."

Taylor Swift reposted Obama's message on Twitter, adding that she is "absolutely terrified that this is where we are – that after so many decades of people fighting for women's rights to their own bodies, today's decision has stripped us of that."

More musicians, including Maren Morris, have spoken out after the Supreme Court's decision was announced Friday.

Morris detailed the decision making she and her husband Ryan Hurd went through before having their son.

"I chose to try for a baby at 29. I waited until I was financially secure enough to do so, so my husband and I could provide him with everything he needed," Morris said in a statement to Rolling Stone Friday. "Today, I hold my two year old son with tears streaming down my face because all my love and planning still wasn’t enough to protect him from being born in a country who could do this to women."

The country star added: "Tomorrow I will fight, but today I am grieving.'

Social media users flooded platforms with reactions Friday morning, including several celebrities who have previously spoken out about abortion rights.

Actor Viola Davis wrote that she was "gutted" by the ruling.

"Now more than ever we have to use our voice and power! WE the people," she added.

"The heartbreak this has caused is immeasurable," the actor tweeted. "But someday, hopefully soon, we WILL find our way to a future where reproductive freedom is forever enshrined in federal law."

"Are you paying attention? You need to," tweeted Broadway star Audra McDonald.

Hailey Bieber said she was "speechless," sharing a headline about the decision on her Instagram Story.

"What an extreme loss and disappointment," she continued. "This is really really scary."

Harry Styles wrote that he's "absolutely devastated for the people of America."

"Check on your friends," he continued. "Look after each other. We’re all in this together, and the fight is just beginning. A truly dark day for America."

Haddish also opened up about her plan to adopt soon. "Once I finish these two, I got two more movies to do and then I'll adopt," she said. "If I'm going to be a parent, I want to be a present parent."

Lizzo tweeted that she's pledging $500K from her upcoming tour's earnings to Planned Parenthood and abortion organizations. She added that Live Nation Entertainment, a ticket sales corporation, has agreed to match her donation, bringing the total to $1M.

"No one, not the government, not politicians, not the Supreme Court should prevent access to abortion, birth control, and contraceptives," read a tweet from the official Pearl Jam account, which also featured a video of lead singer Eddie Vedder speaking out about abortion rights during a concert.

"People should have the FREEDOM to choose," the post added.

No one, not the government, not politicians, not the Supreme Court should prevent access to abortion, birth control, and contraceptives. People should have the FREEDOM to choose. (1/2) pic.twitter.com/zo67xyzex5

"This is devastating news for families - Men and women - who believe the government should not decide when and with whom they become parents," tweeted actor and producer Elizabeth Banks. "This is not the end of this fight for human rights."

"Everybody gets a gun but nobody gets bodily autonomy. America," Banks added, referencing the Supreme Court's ruling Thursday to strike down a New York law that required state residents to have "proper cause" to carry a handgun.

"I have nothing nice to say at this moment in time," actor Ariana DeBose tweeted.

Late actor Paul Walker's daughter Meadow revealed on Instagram that she had an abortion in 2020. "I sought an abortion. It is a very private and personal experience - the way it should be," she said, noting that it allowed her "to be the happy and healthy person" she is today.

Meadow called the SCOTUS ruling "heartbreaking," adding, "In a world that constantly marginalizes females, this feels like the biggest assault of them all. Banning abortion doesn’t prevent abortions, it prevents safe abortions."

"I hope the 53% of white women who just couldn’t stomach voting for @HillaryClinton are happy that they’ve just ensured that their daughters grow up in #Gilead," tweeted actor Yvette Nicole Brown, referencing the dystopian country from "The Handmaid's Tale." "A woman’s right to choose is a HEALTH decision. A PERSONAL health decision. I’m a Christian and know that."

"They did it. THEY DID IT TO US!" wrote Bette Midler. "#SCOTUS has overturned #RoevWade, enshrined in the Constitution as settled law for over 50 years. How dare they? This #SCOTUS is absolutely tone-deaf to the will and even the actual needs of the American people. #WakeUpAmerica"

"This Supreme Court is an absolute disaster," actor Patricia Arquette added. "From giving people the right to carry guns to taking away women's rights of autonomy over their own bodies. We weren’t being reactive we saw it coming."

Grammy-winning musician Billie Eilish expressed frustration in people being more concerned over the defamation trial between Johnny Depp and Amber Heard than abortion rights being taken away, according to a NME interview published Friday, the same day as the Supreme Court decision.

The artist premiered her song, "TV," at a Manchester show earlier this month which featured the lyric, “The internet’s gone wild watching movie stars on trial / While they’re overturning Roe v. Wade.”

“I was in this state of depression, losing my own rights to my own body, and then I’d go on the internet and it would be people giving their take on this trial,” Eilish said. “Women are losing rights for their bodies, so why are we talking about celebrities’ divorce trials? Who gives a (expletive)? Let them figure it out on their own. The internet bothers the shit out of me sometimes.”

The Depp-Heard trial became a media sensation even before the jury's June 1 verdict that favored Depp. The judge finalized the verdict Friday, confirming that Heard owes Depp over $10 million and he owes her $2 million.

"Our power to plan our own futures and control our own bodies depends on our ability to access sexual and reproductive health care, including abortion," the ad read. "We will not go back – and we will not back down."