‘GET THE F*** OUT’: Filipino diplomat fumes over China incursions

The Philippines’s top diplomat has demanded in an expletive-laden social media message that China’s vessels leave the country’s waters, the latest salvo in a war of words between Manila and Beijing over the disputed South China Sea.

“China, my friend, how politely can I put it? Let me see… O… GET THE F*** OUT,” Foreign Affairs Secretary Teodoro Locsin Jr wrote on Twitter on Monday.

After his comments lit up social media, Locsin commented further on Tuesday: “If Wang Yi is following Twitter then I’m sorry for hurting his feelings but his alone”, referring to his Chinese counterpart.

The latest spat over the resource-rich waters – which China claims almost entirely – flared up in March after hundreds of Chinese boats were spotted inside the Philippines’s Exclusive Economic Zone (EEZ).

China has refused repeated calls from the Philippines to withdraw the boats and tensions have intensified as Manila steps up maritime patrols in the area. Beijing has refused to acknowledge the Philippine EEZ in the South China Sea as defined by the International Court of Arbitration at The Hague.

He also likened China to “an ugly oaf forcing your attentions on a handsome guy who wants to be a friend”.

The order came as his Foreign Affairs Department accused China’s coastguard of “belligerent actions” against Filipino boats involved in maritime drills near the contested Scarborough Shoal, which Beijing took control of from the Philippines in 2012.

China-controlled Scarborough is one of the region’s richest fishing grounds and a flashpoint between the two countries, which have rival claims.

The department said it has lodged a diplomatic protest over the Chinese vessels’ actions towards the Southeast Asian country’s coastguard during patrols and training exercises near the reef last month.

The department said the presence of the Chinese boats was a “blatant infringement of Philippine sovereignty”.

I won’t plead the last provocation as an excuse for losing it; but if Wang Yi is following Twitter then I’m sorry for hurting his feelings but his alone. It’s been my elusive dream to copy until I attain in mind and manner the elegance of Wang Yi. His opinion alone matters. He… https://t.co/LgvHujxzYc

Scarborough Shoal is 240 kilometres (150 miles) west of the Philippines’ main island of Luzon.

China seized it in 2012 and has subsequently ignored a 2016 international tribunal decision that declared its historical claim over most of the South China Sea to be without basis.

Once-frosty ties between the two countries had warmed under Duterte, who set aside the ruling in exchange for promises of trade and investment that critics say have largely not materialised.

Facing growing domestic pressure to take a harder line, Duterte said last week the Philippine maritime patrols would continue, insisting its sovereignty over the waters was not negotiable. 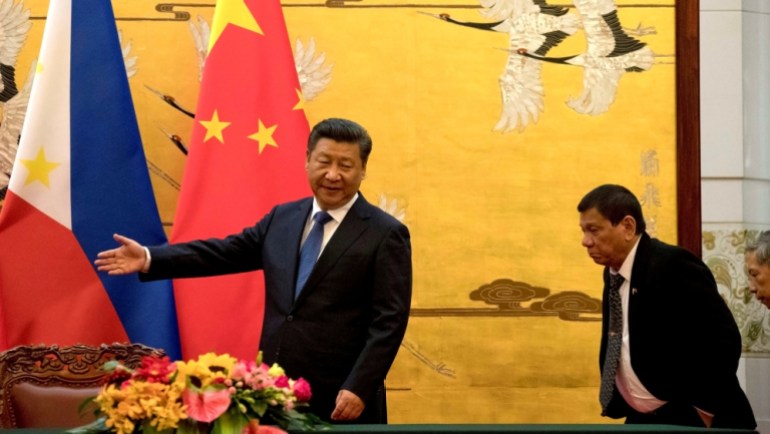 Once-frosty ties between Beijing and Manila had warmed under Duterte, who set aside The Hague ruling in exchange for promises of trade and investment that critics say have largely not materialised [File: Ng Han Guan/Reuters]On Monday evening, Duterte repeated that assertion saying that he never promised to be confrontational with China when he was running for office in 2016.

“China remains to be our benefactor. Just because we have a conflict with China, doesn’t have to mean that we have to be rude and disrespectful,” said Duterte, who frequently curses at individuals, organisations and world leaders and institutions that he dislikes.

In a statement that confounded maritime experts, Duterte also pleaded with Beijing to “kindly just allow our fishermen to fish in peace” in waters that are already declared as within the Philippine EEZ.

As of April 26, the Philippines had filed 78 diplomatic protests to China since Duterte took office in 2016, foreign ministry data shows.

“Our statements are stronger too because of the more brazen nature of the activities, the number, frequency and proximity of intrusions,” said Marie Yvette Banzon-Abalos, the executive director for strategic communications at the foreign ministry.