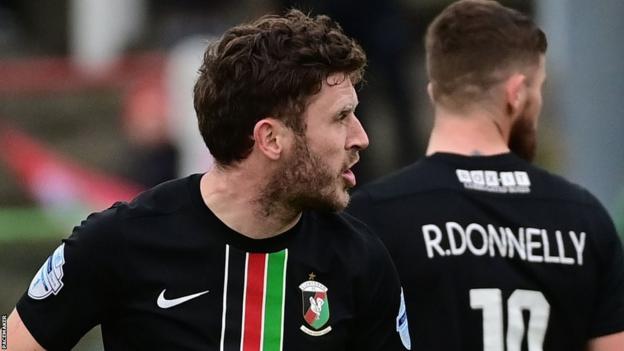 Attacking midfielder McCartan, 28, was certain to receive an automatic three-match ban following his late sending off in the defeat by Cliftonville.

But BBC Sport NI understands he is line for a further four-game ban because of his verbal reaction to the red card.

Glens manager Mick McDermott said he was expecting details about the matter.

McDermott added that the east Belfast club would consider the option of an appeal if McCartan is handed the additional sanction.

"At this moment I know the disciplinary panel will be sending out a letter," McDermott told BBC Radio Ulster's Good Morning Ulster.

"I'm not sure if we received that letter last night or will do this morning.

"A straight red card is usually three [games]. You can appeal all the decisions.

"I will have to look at the referee's report which I haven't seen yet but if it was three plus four, I think anyone would consider that very lengthy, especially if it was for any verbal communication with a linesmen or the referee.

"I've been in Irish League games for a wee while now and some of the language I would say is colourful."