Got Crystals? Gem Mining Could Be Your Full-Time Job

Some modern-day prospectors make thousands of dollars selling precious stones they dug up themselves. 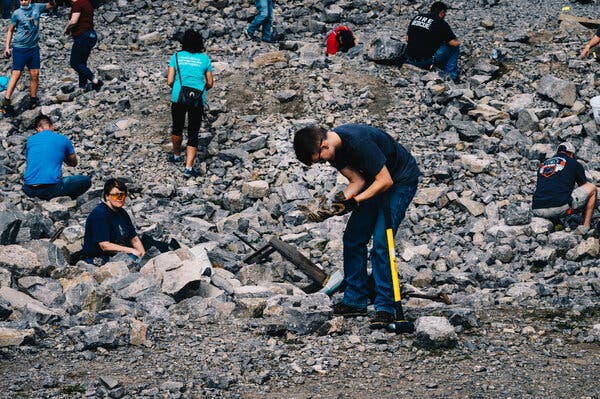 Moonstones in Montana, amethyst and emeralds in North Carolina, garnet and quartz in upstate New York. At pay-to-dig mines around the United States, visitors can paw through piles of mine tailings to uncover crystals and gemstones on “finders, keepers” terms for as little as $10 a day.

At Herkimer Diamond Mines in central New York, home to an especially clear and unusually hard type of quartz crystal known as the Herkimer diamond, a $14 admission price includes a day of prospecting and the rental of a rock hammer. (Children under 4 mine for free.)

In a typical year, one-fifth of the mine’s customers are international tourists, so when the coronavirus halted travel and delayed the start of this year’s April-to-November digging season, the mine’s proprietor Renée Scialdo Shevat worried about what the loss in revenue may do to the 40-year-old family business.

Herkimer diamonds are increasingly popular both for their use in healing rituals and in jewelry.Credit...Nina Westervelt for The New York Times

By late summer, she was more concerned with how to limit the crowds. Diggers of all ages and degrees of seriousness had begun arriving in droves. “These days, every day is like a Saturday,” Ms. Shevat said in early September.

Even before the pandemic sent people searching for road trip destinations and outdoor adventure, interest in prospecting and rockhounding (or “fossicking,” as it is called in Britain and Australia) was already ticking upward. That has prompted some mines that had long been closed, like the Ruggles Mine in Grafton, N.H., toward new life.

From 1963 to 2016, Ruggles hosted tourists and hobbyists seeking mica, aquamarine, rose quartz and other treasures in its underground chutes and caverns. (It closed in 2016 when its owner, then 90, retired.) Late last year, New York City developers snatched it up with plans to reopen it as a tourist attraction, with major upgrades.

Mine owners aren’t the only ones with bright prospects. Some entrepreneurs are finding ways to carve out new careers in gemstones, too. 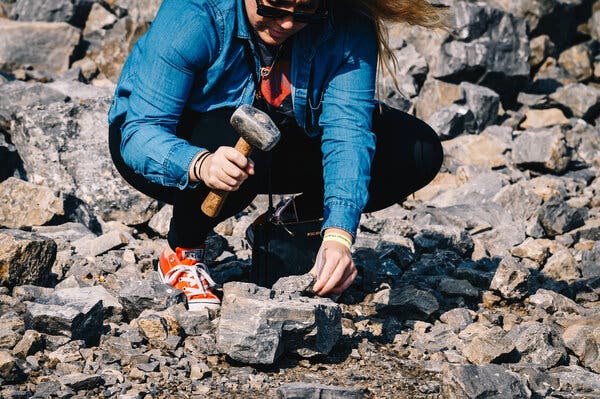 A $14 admission price includes a day of prospecting and the rental of a rock hammer.Credit...Nina Westervelt for The New York Times

For example, after having their jobs and schooling upended by the pandemic in the spring, Frank and Kyndall Stallings, 22 and 27, of Charleston, Mo., pivoted to digging for crystals.

“It all started in February, when Frank took me to the diamond mine in Arkansas for Valentine’s Day,” said Ms. Stallings, of the couple’s visit to a $10-a-day public mine called Crater of Diamonds State Park in Murfreesboro.

While they didn’t bring home a diamond, they did find a tiny piece of quartz. The experience was a thrill of life-changing proportions. By mid-March, Mr. Stallings’s work as a financial adviser had slowed significantly, Mrs. Stallings’s classes for a bachelor’s degree in horticulture had gone remote, and a job she had recently been offered — data entry at a hospital — never started.

With their newfound time, the Stallingses were mining nearly every day.

By mid-April, the couple had sold everything they owned on Facebook, burned everything they couldn’t sell in a bonfire, packed up their truck and hit the road to work as freelance crystal miners.

“Fifty dollars a day to dig, and if you dig really hard you find $2,000, $3,000, $5,000 worth of crystals,” Mr. Stallings said, referring to Ron Coleman Mining, a crystal mine in Arkansas where the couple recently unearthed a “once in a lifetime” 15-pound clear quartz point, which they later sold for $1,500.

While $5,000 days are extremely rare, the Stallingses do earn a living selling specimens of gold, amazonite, pyrite, quartz, fluorite, shark teeth and obsidian out of the back of their Toyota RAV4 and on eBay.

To keep overhead low, they are camping full-time, but expect this “tent life” phase to be just a rite of passage. Ms. Stallings recently emailed from a campsite on the Upper Peninsula in Michigan, where the couple was hunting iridescent yooperlite by UV flashlight at night. “We are just getting started and foresee huge success with this business we are building,” she wrote.

A dedicated rockhound may, in theory, make up to $10,000 a month selling his or her finds on the internet. A mineral or crystal that is hand-collected at a domestic, noncommercial site may fetch several times the price of one imported from a commercial mine abroad, especially in countries where the gemstone trade is known to finance conflict and genocide. Sellers can sometimes charge even more if they capture their finds on video (and hype them on social media).

One of the kingpins of this business model is Bryan Major, a.k.a. the Crystal Collector, a shaggy-haired prospector who posted his first crystal-digging video to YouTube nine years ago.

Video after video show him brandishing an amethyst cluster the size of his torso or an aquamarine crystal the length of his forearm — not only courting potential buyers, but also luring rockhounding newcomers with what they could achieve.

To make a career of digging crystals and gemstones, a nomadic life isn’t mandatory: Patrick and Samantha Krug, 32 and 30, go rockhounding multiple times a week a stone’s throw from their own backyard in Fonda, N.Y.

“There’s nothing like birthing a crystal that has been in the dark for 500 million years, being the first one to bring it into the light, not knowing what you have until you get it out and clean,” Mr. Krug said. He and his wife fell in love with digging Herkimer diamonds while in college at SUNY Cobleskill. (The couple goes by “Him & Herk” on Instagram.)

Two years ago, the Krugs were granted a rare privilege by a local landowner: their own Herkimer land claim, a fraction of the size of a public mine, but one they have all to themselves. They use traditional mining techniques, not power tools, the way their mentors taught them and pay a small fee — $5 per day that they dig — to use the claim exclusively, carting their 16-pound hammers, flat steel, rakes, hoes, safety goggles and other crystal digging gear on a little wagon.

Herkimer diamonds often form in free-floating, double-terminated crystals, which means they have a point on both ends, causing them to resemble a cut diamond.

After a rain, searchers may find them sparkling all over the ground, the size of a poppy seed or a pencil eraser. Or, they may need to bust through walls of dolomitic limestone to find a pocket — an air chamber in the rock where crystals form — where one might find a “palmer” (a palm-sized Herk), or maybe one even bigger.

The clearer and cleaner edged they are, the more value Herkimer diamonds have, and good specimens are increasingly popular both for their use in healing rituals and in jewelry. (Meghan Markle wore Herkimer diamond rings, stud earrings and a bracelet to Princess Eugenie’s wedding last October.)

Despite the Herkimer diamond’s cachet, the Krugs haven’t fully cashed in. They are keeping their operation small and holding onto most of what they find. “We’re trying to collect every formation Herkimers make,” Mr. Krug said. “If it speaks to us, we’re going to keep it.”

“Right now, we mainly only sell on social media,” Ms. Krug added. “I’d like to have a stronger personal collection before really selling them.”

In recent years, crystals — once relegated to the New Age fringes — have formed the bedrock of a mainstream market. As celebrities including Katy Perry, Kylie Jenner, Kim Kardashian West and others espoused the healing properties of crystals and gemstones, the price of small specimens rose fivefold over the past decade. Between 2017 and 2019, U.S. demand doubled.

Some stars, like Gwyneth Paltrow and the former “Hills” stars Spencer Pratt and Heidi Montag, have spun the crystal craze into business opportunity. Mr. Pratt, in a recent interview, said the couple’s home is filled with “at least 1,000” crystals. Ms. Montag had $27,000 worth of them placed at her bedside during the birth of the couple’s first child. In 2018, they started a web store, Pratt Daddy, which peddled hundreds of healing gemstones per week for as much as $300 apiece.

In a 2019 report from The Guardian on the rising popularity of crystals and their ethically dubious sources mused , “Would crystal consumers really be willing to pay more to guarantee safer, child labor-free mines, or a fair wage for miners?”

Customers at the Herkimer Diamond Mine bring their findings to the Artisan Center where employees make them into jewelry.Credit...Nina Westervelt for The New York Times

Brianna Cannon, a jewelry designer on Long Island, said her customers find added value in the fact that, “for the most part, we know who pulled the stone out of the ground, from where, and when.” She said items made with Herkimer diamonds are far and away her best seller for this reason. “People love to hear that we mine them ourselves, and that they naturally form so nearby,” Ms. Cannon said.

Ally Sands, the founder of Aquarian Soul, which makes crystal-infused bath and beauty products (available at stores including Urban Outfitters), also sells crystals on an individual basis, with a marketing emphasis on ethical sourcing.

“We have strong ties to each of our mineral and crystal suppliers, many of whom are small family-run businesses that gather material from their own land,” Ms. Sands, 33, wrote in a blog post last year. Her quartz, for instance, comes from a family that has been collecting on their Arkansas property for five generations. The family that provides her kunzite were her neighbors in San Diego until they moved to their native Afghanistan.

Ms. Cannon and Ms. Sands both regularly attend gem shows, including the country’s largest, in Tucson, Ariz., in order to make connections with freelance miners and rockhounds from whom they can source whatever they don’t dig on their own.

Among those freelancers is Ron Murray, 58, an osteopath in Seattle who mined quartz at Herkimer Diamond Mines from Memorial Day to Labor Day this year.

Shine bright like a diamond.Credit...Nina Westervelt for The New York Times

For his first six years digging crystals, Mr. Murray said he was “too attached” to part with anything he found. But this year, upon returning home to Seattle, he planned to keep the top 5 percent of his harvest, and sell everything else.

“Very few people can do this,” he said. “It takes stamina. It takes knowledge. It takes masochism.”

Like many others who share his passion for crystal hunting, he calls it an addiction — one propelled by the unshakable thought that the next pocket of untold treasure may open up on the next swing.

He recalled the legend of a Herkimer Mines regular who once found a flawless, water-clear, perfectly terminated Herkimer point worth $50,000 and traded it for a $35,000 sports car. Then there is the story of “Diamond Jim,” the retired fifth grade schoolteacher who, upon his passing, left his children with a collection of Herks worth an estimated $1 million.

These stories just fuel the obsession, Mr. Murray said. “There are a lot of broke prospectors out there.” Model jailed in Bali over $54 of weed - Daily Telegraph 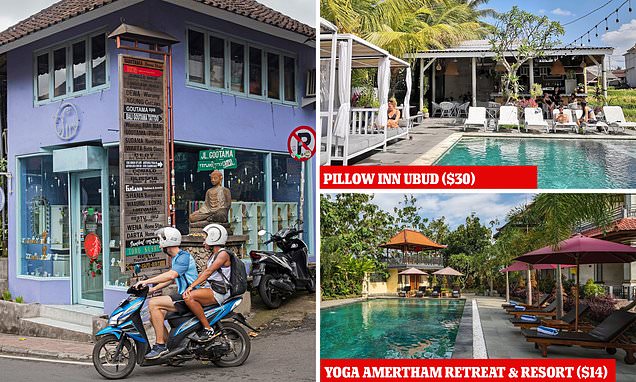 Coronavirus: Bali hotel rooms on sale for as little as $14 a night as Australians look to holidays - Daily Mail 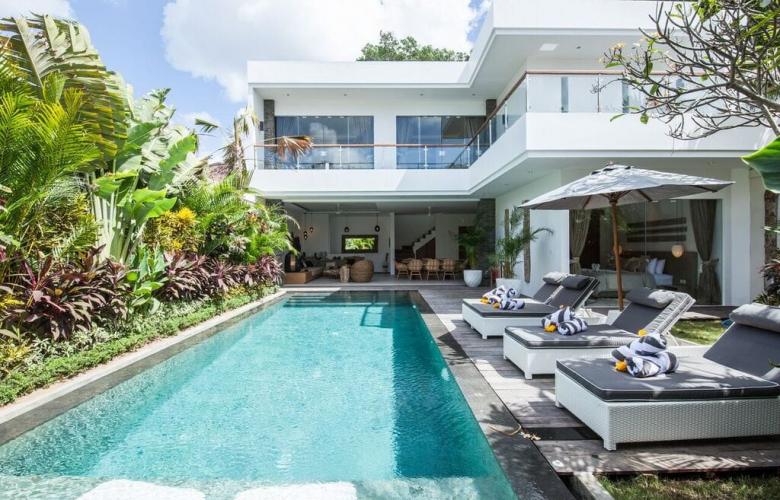