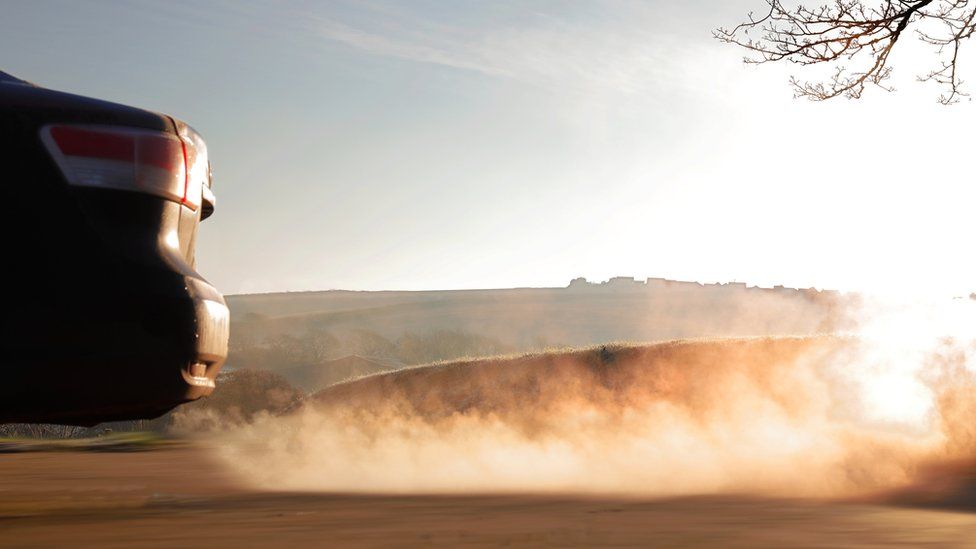 Nitrogen dioxide from car exhausts is a particular concern

The government is not on track to meet its target to reduce health-damaging air pollution in England, the National Audit Office says.

The UK has legal limits on pollutants released into the air, and emissions have fallen in recent years.

But progress is too slow, and the public cannot easily find out if there are illegal levels of pollution where they live, the NAO's report says.

The report highlights that air pollution is unevenly distributed across the UK, with low-income and ethnically diverse areas disproportionately affected.

Existing measures are not enough for the government in England to achieve its goals to limit air pollution to within legal limits by 2030, the NAO says.

The report raises particular concerns about levels of nitrogen dioxide, which is released into the air by road vehicles burning fuel.

There are "longstanding breaches" in exceeding the limits on this pollution, it says. But it points out these emissions fell during the Covid-19 pandemic when the number of people driving cars fell dramatically.

The impact of dirty air on our health, in particular that of children, was highlighted by the death of nine-year-old Ella Kissi-Debrah.

She had severe asthma and in 2020 she became the first person to have air pollution listed as the cause of death on their death certificate. The ruling concluded that nitrogen dioxide emissions exceeded legal limits where she lived in London.

"People cannot easily find out about air quality problems in their local area, whether pollution levels breach legal limits, and what progress their local authority is making on tackling those problems," NOA says.

But it warns campaigns to tell drivers and residents about the initiatives are not clearly communicated.

A government spokesperson told BBC News: "We welcome the findings of the NAO report which rightly highlights the progress made by the government whilst also recognising the challenges we face.

"We have committed nearly £900m to tackle air pollution and improve public health."