‘He has no case’: Relative calm as jury considers Chauvin charges

Minneapolis, Minnesota – Minneapolis remains on edge Tuesday following a night of subdued protests as it awaits a verdict in the murder trial of former Minneapolis Police (MPD) officer Derek Chauvin for the murder of George Floyd.

The biggest surprise came from the nearly three-hour closing from Chauvin’s lawyer, which was interrupted by Judge Peter Cahill’s call for a lunch break and looks of boredom from the jury, according to court pool reports.

Monday was calm in Minneapolis following days of tumult. A demonstration began at 5pm local (21:00 GMT) near the Hennepin County Justice Center, which serves as the courthouse, shortly after the jury began deliberations.

The crowd was smaller than in recent nights, with about 2,000 attendees at its peak, but still fervent. The trial was on the minds of protesters.

“Nelson was stalling. He knows he has no case,” Steve Graff, one of the demonstrators, told Al Jazeera in reference to the defence’s lengthy closing argument.

“Anyone who watched the trial sees Chauvin is guilty”, the 28-year-old said through a bandana covering his face. 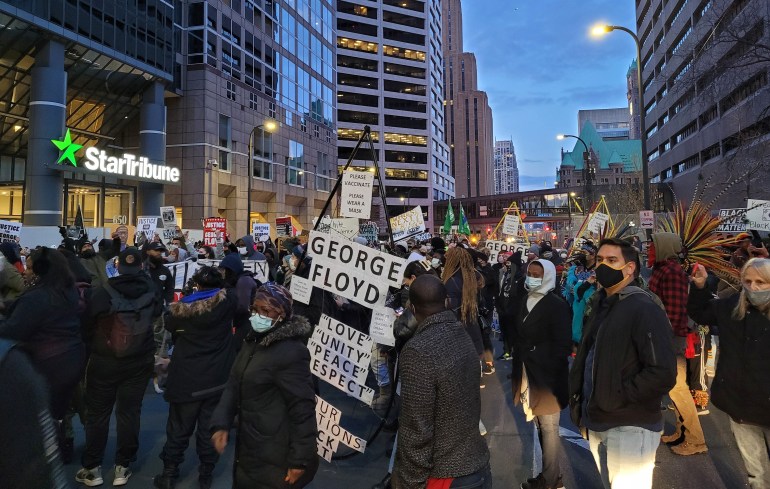 Protesters gather in Minneapolis amid jury deliberations in the trial of former Minneapolis Police officer Derek Chauvin on April 19, 2021 [Creede Newton/Al Jazeera]The prosecution called 38 witnesses and played video of Floyd’s death on May 25, 2020, dozens of times over its 11-day presentation.

Witnesses – including current MPD officers –bolstered the prosecution’s narrative that Floyd died of asphyxiation because of Chauvin holding his knee on the Black man’s back for over nine minutes.

Nelson presented for two days, calling witnesses who testified Chauvin acted appropriately and a combination of Floyd’s preexisting health conditions, drugs, and exhaust from a nearby police car were contributing factors to Floyd’s cause of death.

Demonstrators carried signs calling for justice and Chauvin’s arrest amid chants of “F**k the police” and “National Guard go home”.

Roughly 3,000 National Guard troops are in Minneapolis, bracing for a verdict. They take positions throughout the city around nightfall and stay through the early morning.

Residents told Al Jazeera they are not sure where the troops will be stationed when night begins, nor for how long.

The soldiers and police have been accused of using excessive force on protesters and media during raucous protests in Minneapolis and Brooklyn Center, where Daunte Wright was shot and killed by former police officer Kim Potter on April 11.

Two troops were injured after a man opened fire on them and a police officer in the early hours of Sunday. Authorities have arrested Andrew Thomas, 28, in the case.

“I don’t like cops, but I almost feel bad for them”, Minneapolis resident Jordan Rabkin, 42, told Al Jazeera as he biked past the protest at the courthouse.

While they have the power, “they feel under attack. It puts them in a bad state of mind”, Rabkin said.

Chauvin is charged with second- and third-degree murder, and second-degree manslaughter. The jury has no time limit for deliberations to determine guilt or innocence on the charges.

The jury’s decision has broad implications across the US, which is bracing for protests.

Demonstrators chanted they would “shut it down” if “George doesn’t get justice.”