Science|House-Hunting on Mars Has Already Started

Researchers identified nine caves on the red planet that might make suitable shelters for future astronauts. 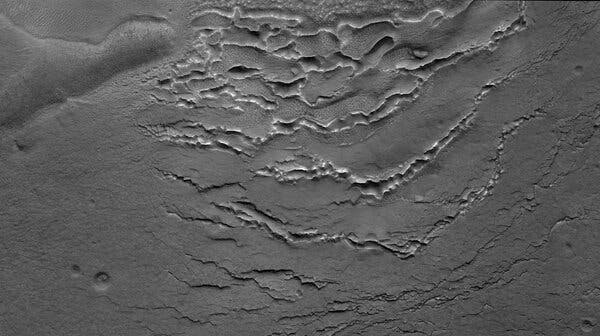 A detail of the Deuteronilus Mensae region of Mars where researchers on Earth found a number of caves that could be suitable dwellings for future human visitors.Credit...NASA/JPL/University of Arizona

The neighborhood is a wild card, and moving there is bound to be expensive. But one of the best options for shelter when humans finally make it to the red planet will be subterranean caves. These rocky hollows, which exist in droves on both Earth and the moon, are natural buffers against the harsh conditions of Mars.

In a presentation this month at the Geological Society of America Connects 2022 meeting in Denver, researchers pinpointed nine leading cave candidates worthy of future exploration. All of these grottos appear to extend at least some distance underground, and they’re close to landing sites accessible to a lightweight rover.

These structures would offer a respite from the challenging Martian environment, said Nicole Bardabelias, a geoscientist at the University of Arizona. “Everything at the surface is subject to harsh radiation, possible meteorite or micrometeorite bombardment and really large day-to-night temperature swings,” she said.

To home in on Mars’ most sought-after real estate, Ms. Bardabelias and her colleagues consulted the Mars Global Cave Candidate Catalog. This compendium, based on imagery collected by instruments aboard the Mars Odyssey spacecraft and the Mars Reconnaissance Orbiter, inventories over 1,000 candidate caves and other peculiar-looking features on Mars. (Think of it as the first Martian multiple listing service.)

Just as any discerning home buyer would filter search results on Zillow or StreetEasy, the researchers narrowed the catalog by imposing two criteria. First, they required that a cave be within roughly 60 miles of a suitable spacecraft landing site. Second, they stipulated that high-resolution imagery be available.

NASA’s Mars Reconnaissance captured an image of terrain near Hephaestus Fossae where another cave can be found. The researchers highlighted nine caves that would be close to future astronaut landing sites.Credit...NASA/JPL/University of Arizona

“Mars has just enough atmosphere that you can’t discount it, but not enough to actually give you a significant amount of aerobraking,” she said, referring to using a planet’s atmosphere to slow an incoming spacecraft. “If you don’t have enough space between when you hit the top of the atmosphere and where you’re supposed to land, it’s going to be very, very hard for you to do the entry, descent and landing sequence properly.”

The team also required that top-shelf imagery be available for each cave candidate. Until brokers appropriate NASA’s Mars Helicopter for Martian real estate photography, that honor belongs to HiRISE, or the High Resolution Imaging Science Experiment camera aboard the Mars Reconnaissance Orbiter. Ms. Bardabelias is lead operations engineer for HiRISE, which is capable of discerning features on Mars as small as about 3 feet across but has imaged less than 5 percent of the planet’s surface to date.

There were 139 apparent caves that satisfied the team’s criteria, and Ms. Bardabelias and her collaborators manually examined images of each one. After disregarding features like bridge-shaped rock formations that obviously weren’t caves, the team analyzed the remaining pit-like features. The researchers homed in on only those that appeared to extend some distance underground, which yielded a sample of nine leading cave candidates.

These potential caves, the largest of which has an opening that could swallow a football field, are all worth a closer look, Ms. Bardabelias said. But none of the rovers currently operating on Mars are close enough to explore any of these caverns, so that task falls, for now, to spacecraft orbiting the red planet. Follow-up HiRISE images taken from different angles and in different lighting conditions will reveal new details about these caves, Ms. Bardabelias said. You can help the HiRISE team decide what to photograph next by voting for your favorite cave.

It’s fitting that we’re looking to caves once again for shelter as we prepare to explore new worlds, said Glen Cushing, a space scientist at the Astrogeology Science Center at the U.S. Geological Survey and the creator of the Mars Global Cave Candidate Catalog, not involved in the research. “That takes us all the way back to the dawn of humanity.”