How football is helping Yemenis cope with the prolonged war

Amid the brutal conflict in Yemen that has killed more than 370,000 people, Yemenis have turned to their long-running love for football to help them cope with the devastation, violence and humanitarian crisis ravaging their country.

Through unofficial football tournaments held across different villages and cities, Yemeni boys and men have been coming together to try and live a vague semblance of a normal existence.

On makeshift football fields covered with nothing but sand and rocks, amateur players display their skills to a cheering audience that come in the hundreds from near and far.

There are no seats. The crowd, ranging from 800 to 1,500, usually stands on its feet for the duration of the matches, shouting and singing to spur on their team and players.

As with many aspects of life across Yemen, the official football scene came to a sharp halt as a result of the war that broke out in 2014.

In the political vacuum that followed the unseating of the country’s longterm president Ali Abdullah Saleh, the Iran-backed Houthi group sought power over Yemen, seizing the country’s capital Sanaa and eventually driving away the United Nations-recognised government and its then-president, Abd-Rabbu Mansour Hadi, who had the support of Saudi Arabia and other regional players.

Almost 60 percent of the 370,000 deaths since the conflict broke out have occurred due to hunger, lack of healthcare and unsafe water as the country’s infrastructure suffers immensely.

Nearly 25 million Yemenis remain in need of assistance, five million are at risk of famine, and a cholera outbreak has affected more than one million.

With the dire situation on hand, many Yemenis turned to football for solace, not only taking part in unofficial tournaments but also taking up street football. 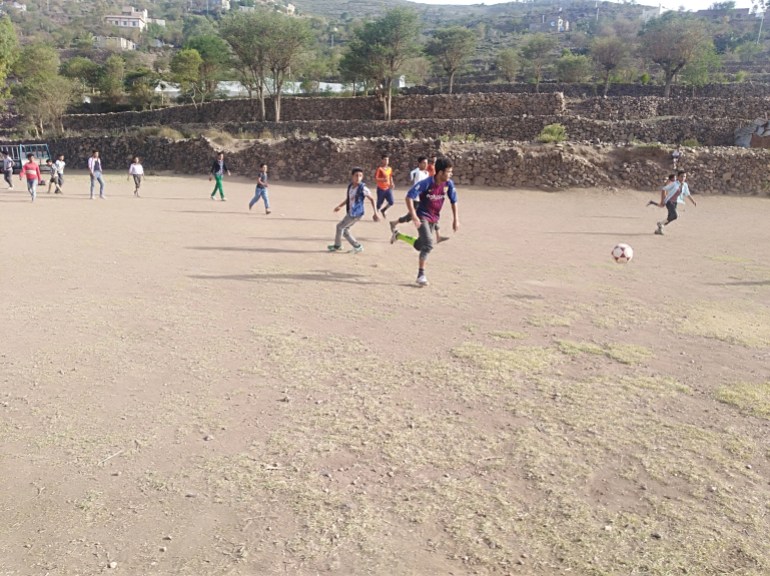 According to Sami al-Handhali, a football commentator and former player for al-Ahly Taiz football team, sports infrastructure faced heavy destruction, with stadiums and sports centres targeted in attacks or converted into military bases.

“Yemenis have arranged their own events on makeshift football pitches, which brought back excitement among the crowds and helped them deal with their plights as well as lead to discovering new talents who were then picked up by the club side as well as the national team,” al-Handhali told Al Jazeera.

“These matches and tournament also help keep many young men from getting involved in the violence as it strengthened the bond between players and audience of different regions and tribes”.

While these matches enforce a sense of belonging to a village or province, sentiments of national unity are also at play despite years-long divisions and two local governments.

The audience would often break into chants for Yemen, calling for a united and peaceful home for all.

For Ramzy Mosa’d, 25, these football tournaments are an opportunity to connect with other Yemenis in a way he is not used to.

Being a member of the country’s Muhamasheen – a Black minority group that has historically been marginalised – he is confined to the slums of Jibla, a town in southwestern Yemen, on the outskirts of Ibb.

Here, the Muhamasheen are far away from other Yemenis, crammed in houses made of thatch or cardboard, in areas that lack basic services of healthcare, clean water, sanitation or reliable electricity.

So, for the Muhamasheen’s football team “Elnaseem” to get invited to a tournament in Assayani district and play alongside other teams from Ibb “warmed our hearts”, according to Mosa’d.

“We were overwhelmed and filled with joy and happiness as we watched the crowd appreciating us as if we were residents of the area,” added Mosa’d, whose team ended up winning that tournament earlier this year.

Being shunned from society as a result of a centuries-old social hierarchy in which the Muhamasheen are confined as the lowest of its ranks, Mosa’d said that the invitation to join the tournament “was immensely appreciated and we wanted to show others that we, too, have talented footballers and are keen on blending in with our society”.

This particular tournament has taken place every winter since 2017 in the Houthi-controlled region, according to Motee’ Dammaj, one of Assayani tournament’s organisers and funders.

Invitations are sent out to as many as 16 teams from the Assayani and Jibla villages and the “keenness to organise such events stem from knowing Yemenis’ love for the sport, and wanting to breathe life into many Yemenis devastated by the war, while also strengthening the social bond among them”, Dammaj said.

Participation figures, however, depend on the situation in the country at the time, he added.

“Every year, there’s a big turnout and participation from players and audience and the spirits are always high. Despite the acute fuel shortage which imposed a challenge for many to join the games, eight teams still managed to take part in the tournament,” he said, welcoming the Muhamasheen’s presence in the games which was “important to break the cycle of discrimination that this minority has been facing for many years”.

From street football to the national team

In 2017, Hamza Mahrous, then 13, was among the hundreds of thousands who fled the Red Sea port city of Hodeidah, escaping the escalating violence. He settled with his family in Taiz, which experienced its own clashes and violence and has been blockaded by Houthi forces since 2015.

Having lived most of his life in a rural setting, Mahrous developed a deep love for football at a young age. Prior to his displacement, he won several awards for his skills as a footballer, playing as a striker for his school team as well as a local club.

In Taiz, he played in unofficial tournaments that took place on the war-wrecked streets of al-Masbah neighbourhood where he lived.

He was quickly snapped up by several local teams, including Talee’ Taiz football club and Ahly Taiz, with whom he won the Balqees tournament.

In 2019, he was spotted by a group of scouts on the lookout for players to join Yemen’s national team, and was invited to join the under-15 squad.

“Joining the national team was a dream which I never thought would come true, especially given my circumstances of displacement and the difficult times we went through,” Mahrous told Al Jazeera.

“But through persistence and practice, on the streets and football fields, and with my parents’ support, it happened.”

In December 2021, Mahrous and his teammates gave Yemenis a rare taste of jubilation and national pride when they won the West Asian junior football championship, beating Saudi Arabia on penalties in the final.

Yemenis flooded the streets in celebration, some firing their weapons in the air, briefly rejoicing with a sense of pride and unity.

“I felt a part of creating the happiness millions of Yemenis very much craved and needed, which was only possible through football – a game they all very much loved,” said Mahrous.

‘The way to accept my lost dreams’

Saad Murad, 30, said he missed the chance to move forward with his football career because of the war.

After more than a decade of building up his portfolio as a footballer, from school tournaments in his home city of Damt to playing in Yemen’s premier league for Dhu Reidan sports club, Murad looked set for the national team.

But as the league and all official sports activities got suspended, Murad’s career hit a major road block. He said the only connection he has with his previous life is through the unofficial tournaments taking place in winter.

“These local tournaments have provided solace, respite and a way to accept my lost dreams,” said Murad, who is unable to land a job amid the country’s dire economic situation.

With the participation of 32 official football clubs as well as national team players, the tournament hosted in Damt last winter was one of the biggest football events to take place in the country in seven years. 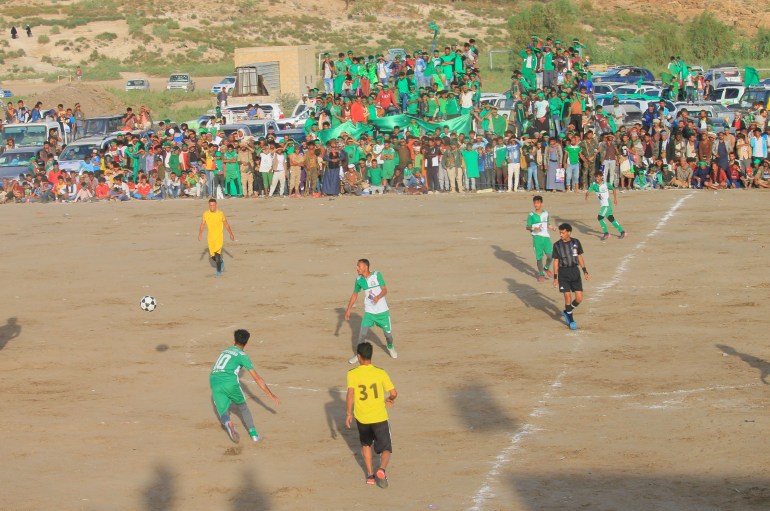 Damt’s tournament for official clubs, which took place between February and April, had 32 teams participating and an audience in the hundreds [Abdullah Heidara]

According to Moammar al-Hajri, a member of the organising committee in Damt, this tournament has been taking place annually since 2018 through independent funding and donations, with support of businessmen and business entities as well as Yemenis abroad.

Such amounts are significant in a country where the local currency suffers immense blows as a result of the conflict.

As jobs are lost and salaries are suspended, millions are struggling to survive, and the situation is made worse by a fuel shortage that has driven inflation higher.

Mahioub al-Marisi, 50, a civil servant who attended most of the matches at this year’s tournament with his children, was amazed at the sheer number of people who came from far away areas, often on foot.

“The football pitches were sandy yet the passionate audience flooded surrounding spaces and spilled into farming fields to get a glimpse of the games. People were just ecstatic and excited to be there. It restored a part of the Yemenis’ spirit,” he said.

Away from these tournaments, and on an almost daily basis, 22-year-old Jameel Nasher heads to an open space near his house on Taiz road in Ibb, where he meets other football lovers later in the afternoon to play football that goes well into the night.

Wearing Mohamed Salah’s number 11 Liverpool jersey to reflect his love for the player, Nasher forms a team of eight players.

On the field, there is a flurry of colours with every player wearing a jersey of a club he supports.

“Our love for football and us playing on the street is the thing that remains unchanged in our lives which has been wrecked by war. We grew up playing the game and it’s reassuring to know that it has not been taken away from us,” he said.