What once felt like a quirky California pit stop is now a popular getaway destination. Here’s a guide to the city’s beaches, bars, bookshops and beyond. 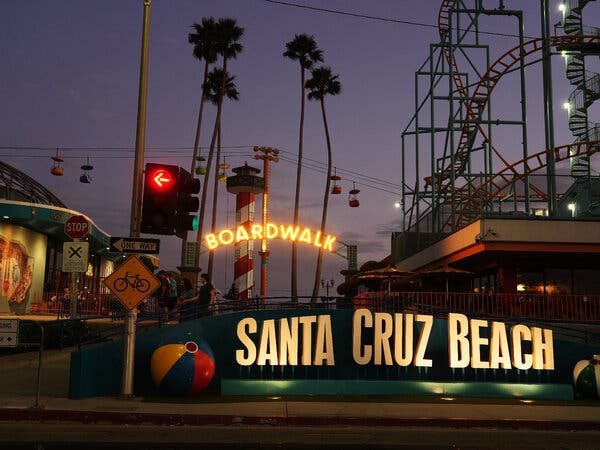 One of the entrances to the Santa Cruz Beach Boardwalk.Credit...Jim Wilson/The New York Times

Anyone who grew up in the San Francisco Bay Area in the 1990s will almost certainly have the Santa Cruz Beach Boardwalk commercials stamped on their subconscious, alongside their best friend’s landline. But Santa Cruz is much more than a West Coast Coney Island. (The Boardwalk, incidentally, is California’s oldest amusement park and is a fine place to ride a historic roller coaster with an ocean view.)

Santa Cruz, a city of some 60,000, defies easy categorization. A college town (go Banana Slugs!) and a world class surfing destination, it’s within commuting distance of Silicon Valley. And yet somehow it still manages to feel hidden away.

Hugging the northern lip of the scallop shell-shaped Monterey Bay, travelers can reach Santa Cruz via a dreamy coastal drive on California’s Highway 1, or rounding vertiginous curves through the Redwood forests of the Santa Cruz Mountains. Technically the beginning of the Central Coast, Santa Cruz has been influenced by Silicon Valley without actually becoming a part of it; it is its own county and decidedly has its own vibe. This is a place where, daily and unironically, you’ll see a vintage Volkswagen Vanagon parked next to a Tesla, with surfboards extending from both.

As a former Bay Area kid, I’ve been coming to Santa Cruz for as long as I can remember: Memories of foggy summer days ambling along the Boardwalk with a high-school best friend meld with images of late-night veggie burgers and shakes after backpacking trips in Big Sur. But what once felt like a quirky, crunchy pit stop is now one of my favorite weekend destinations from my home in San Francisco — for unbeatable outdoor adventures, both on land and in the water, a standout live music scene, and excellent food and drink options that can stand up to its higher profile neighbors to the north and south.

A group of surfers prepares to enter the water.Credit...Jim Wilson/The New York Times

Reportedly one of the first places surfed on the mainland, Santa Cruz has spawned more than a few world-class professional surfers and boasts more than 10 surf breaks, with spots for all levels. Popular go-tos include Cowell’s, a cruisey, accessible break best for beginners and beloved by longboarders; Steamer Lane, a famous spot in both Santa Cruz and California at large; and Pleasure Point, a beloved local wave on the city’s sleepy eastern side.

The Santa Cruz surf scene is somewhat notorious for a strong locals-only attitude, but tensions can be avoided by respecting the rules, which are helpfully inscribed on signage mounted atop the cliffs above Steamers and Pleasure Point — alongside monuments to fallen surfer comrades. (In brief: Respect the lineup and don’t be a kook.)

A surfer walks past a sign explaining the rules of the waves at Pleasure Point.Credit...Jim Wilson/The New York Times

Take the opportunity to learn from local experts at outfits like Surf School Santa Cruz, which offers private surf instruction and group lessons (advanced booking is recommended). If you’re ready to shred on your own and are in need of a board, surf shops, many with rental options, abound, from Cowell’s Surf Shop, right off the water, to the Traveler Surf Club, on the Eastside. The Midtown Surf Shop + Coffee Bar is another worthwhile destination for your gear needs; in addition to boards, wet suits, leashes and fins, they’ve got a nice selection of clothing, gifts, a surfboard shaper (available to rent for $15 per hour) and a cafe serving Verve coffee.

If you’re more comfortable as a spectator, or looking for inspiration, then check out the O’Neill Coldwater Classic, a World Surf League qualifying competition that’s returning to Steamer Lane Nov. 15-19 for the first time since 2015.

While surfing may be king in Santa Cruz, there are other great ways to get in the water, including stand-up paddleboarding, kayaking and swimming, plus ample beaches for beach volleyball, bonfires and, naturally, lounging. And don’t forget about the many opportunities for land-based adventures: Santa Cruz is a famous hub for mountain biking, with trails snaking along the coast and through the surrounding mountains, and is a hiking and camping destination, too, particularly in Henry Cowell Redwoods State Park and Big Basin Redwoods State Park, which is currently open for limited day-use access following 2020’s C.Z.U. Lightning Complex fires.

The Rio Theater, one of the city’s many music venues.Credit...Jim Wilson/The New York Times

Tempting as it may be to remain in the beautiful wilds of the area, it’s worth a return to civilization to catch a show. Santa Cruz has a wealth of live music venues and draws an impressive mix of indie bands and legacy acts, plus a thriving community of local musicians who often perform at cafes and bars around town. The Rio Theater in Midtown, housed in a converted movie theater, is an intimate venue that draws a range of acts, including Patti Smith, Little Feat and indie legends like Bill Callahan and Built to Spill. Other venues with calendars worth scoping include the Catalyst, which plays host to bands, karaoke nights and DJ events; Moe’s Alley, which has a spacious outdoor patio and food trucks; and the Kuumbwa Jazz Center, a destination for jazz performances and educational programs. Up in the mountains you’ll find the Felton Music Hall, an intimate venue with a solid bar and restaurant attached for pre- and post-show food and drink.

All of this activity is a fine way to work up an appetite, and Santa Cruz more than delivers with delicious options across a range of prices. I’m evangelical about the Point Market, an unassuming shop and cafe out by Pleasure Point that makes my platonic ideal of a breakfast burrito — perfect as pre- or post-surf fuel. (They’ve got a location near Cowell’s now, too, called the Pacific Point Market & Cafe.) Steamer Lane Supply, a low-key stand on the cliffs above Steamers, has a flavor-forward menu of quesadillas, breakfast tacos and bowls bursting with fresh, local ingredients. For a sit-down brunch, Harbor Cafe is unbeatable, with its hangover-busting breakfast platters and hair-of-the-dog cocktails. In Soquel, a small town northeast of Santa Cruz, Pretty Good Advice, a project from chef Matt McNamara (formerly of San Francisco’s Michelin-starred Sons & Daughters), is slinging on-point breakfast sandwiches and burgers; the menu is entirely vegetarian and features produce sourced from Mr. McNamara’s farm in the nearby mountains.

The breakfast burrito at the Point Market is perfect as pre- or post-surf fuel.Credit...Jim Wilson/The New York Times

Inside Steamer Lane Supply, a low-key stand on the cliffs above Steamers.Credit...Jim Wilson/The New York Times

Elsewhere in Soquel you’ll find Home, a charming dinner option with fresh pasta and an excellent in-house charcuterie program. Other favorites include Bantam, a wood-fired pizza destination on Santa Cruz’s bustling Westside (the soppressata pie and fried chicken are must-orders); Copal, for outstanding mole and an encyclopedic mezcal selection; and Alderwood, where you’ll find a selection of high-end cuts of beef alongside local produce. While it’s tempting to splurge on a bone-in rib-eye, Alderwood is also an excellent place to grab seats at the bar for their gloriously messy burger and a cocktail. (The mezcal-based Director’s Cut is outstanding.) During my last visit, I ended up in conversation — and sharing bites of the restaurant’s signature maitake mushrooms, also known as also known as hen-of-the-woods, with my neighbors. (Oswald is another local favorite for a burger-cocktail combination.)

Dan Satterthwaite, the co-founder and brewmaster of New Bohemia Brewing Co., showcases three of his brews: Festbier, the Hook and the Fizz.Credit...Jim Wilson/The New York Times

Wine has long been a fixture in Santa Cruz. (The Santa Cruz Mountains is a dedicated AVA, or American Viticultural Area.) More recently, though, spots dedicated to natural wine — wines made with minimal interventions and no added yeast — have been gaining a foothold. Bad Animal, a rare and used bookstore and natural wine bar, has wines from California and beyond, along with books ranging from $4 paperbacks to $40,000 antiquarian volumes. Dedicated to “the wild side of the human animal,” the shop opened in 2019 and plays host to a rotating roster of chefs-in-residence. (The most recent, Hanloh Thai Food, started this month.) Apero Club, a warm, funky wine bar and shop on the Westside, opened in August 2020 and hosts food pop-ups and, often, raucous dance parties with tunes spun on vinyl.

Santa Cruz’s craft beer scene is also outstanding, from Santa Cruz Mountain Brewing, an all-organic brewery founded in 2005, to New Bohemia Brewing Company, which focuses on European-style brews alongside I.P.A.s. Some of my favorites include Soquel’s Sante Adairius Rustic Ales, a destination for funky sours and farmhouse ales, and Humble Sea Brewing, which, in addition to standout hazy I.P.A.s and co-ferments, has some of the best can art around. For a wider array of beers, check out the Lúpulo Craft Beer House in downtown Santa Cruz for a regularly changing selection of brews and Spanish-style small plates, or Beer Thirty, a sprawling beer garden in Soquel with 30 rotating taps. If you’re with a group of beer enthusiasts, you can sign up for a Brew Cruz, a craft beer tour of the area aboard a vintage VW bus.

Your explorations may lead to a sluggish morning; thankfully, Santa Cruz is also a serious coffee destination. Verve, which has cafes around town (plus around California and in Japan), opened in 2007, focusing on equitable business practices and intentionally sourced coffee beans. Cat & Cloud has four cafes in the area; the sunny Eastside location is a particularly nice place to spend a morning. At 11th Hour Coffee, the excellent coffee is roasted in-house and best enjoyed in their plant-filled cafes both downtown and on the Westside. (Their chai is outstanding, too.)

There are ample lodging options in Santa Cruz, including Airbnbs and low-key beach motels. The Dream Inn is the city’s only beachfront accommodation; renovated in 2017 in a retro surfer-kitsch style (the hotel’s Jack O’Neill Restaurant got a refresh in 2019), the hotel has 165 rooms (from $299), all of which have an ocean view. The pool deck overhangs Cowell’s Beach, with stairs leading directly to the sand, making for unparalleled ocean and surfing access. Hearing the waves (and the barks of sea lions) from bed is quite nice, too.

For a mountainside retreat that’s still close to downtown Santa Cruz, Chaminade Resort & Spa has 200 rooms (from $359) and is on 300 acres in the Santa Cruz Mountains, with direct access to hiking trails. Also on offer are tennis, pickleball, disc golf and Santa Cruz’s only full-service day spa, plus panoramic views of the Monterey Bay from the hotel’s restaurant — fittingly called The View. The property completed a major renovation in 2020 and completed a new pool area in 2022 that includes two pools, cabanas, a bar and a food truck on weekends.