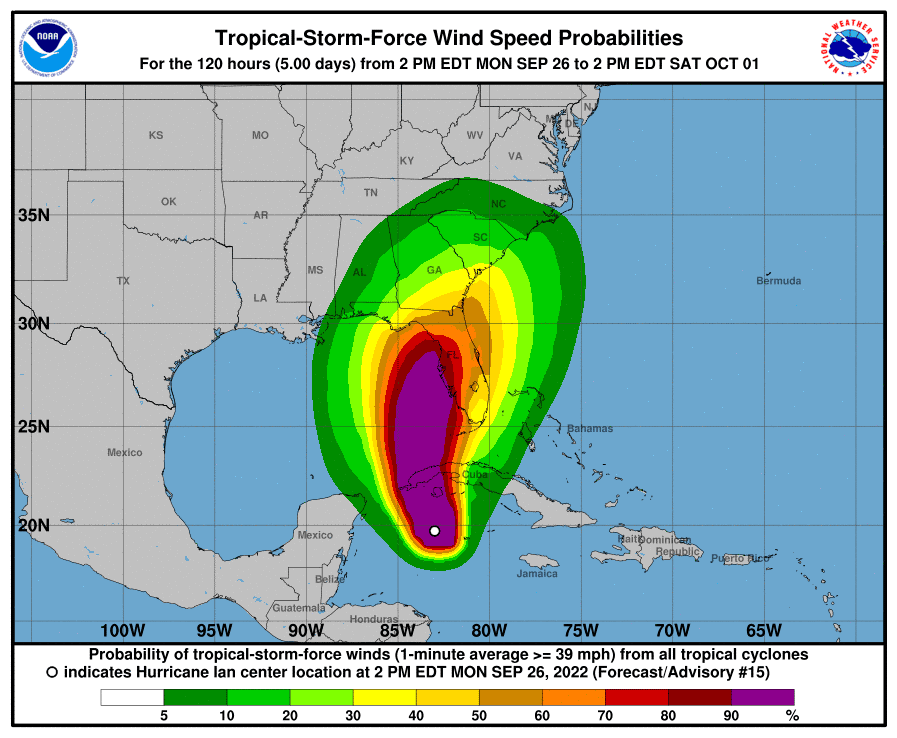 Hurricane Ian is already causing closures and cancellations around Walt Disney World at resorts, water parks, and more. We’ll update you on the storm’s impact on WDW operations, what you can do if you’re scheduled to travel to Florida in the near future to help you decide whether to reschedule your trip, cancel entirely, or ride out the storm at a hotel. (Updated September 26, 2022 at 8 pm EST.)

Earlier today, we shared that Hurricane Ian continues to strengthen and shifts towards Central Florida and Walt Disney World. Since then, Hurricane Ian has already intensified into a Category 2 system, with its path continuing to target Florida’s Gulf Coast including a threat to Central Florida, which is now under a tropical storm watch as hurricane warnings were issued along the coast including the potential for 10-foot storm surge in Tampa Bay.

The National Hurricane Center updates its Hurricane Ian Advisory every few hours, at which point it shifts the ‘cone of uncertainty’ representing the range of possibilities for the storm’s center that extends up to five days into the future. The cone of uncertainty predicts the hurricane’s path, but even outside of the cone, ferocious winds, storm surge, heavy rains, and other intense weather can be felt.

Now, Walt Disney World has shared its first closures and warnings for Hurricane Ian, with the following announcement:

“Walt Disney World Resort is currently operating under normal conditions as we prepare to make necessary adjustments based on the latest information from the National Weather Service. We continue to put the safety of our Cast Members and Guests first and will share updates as we monitor Hurricane Ian.” 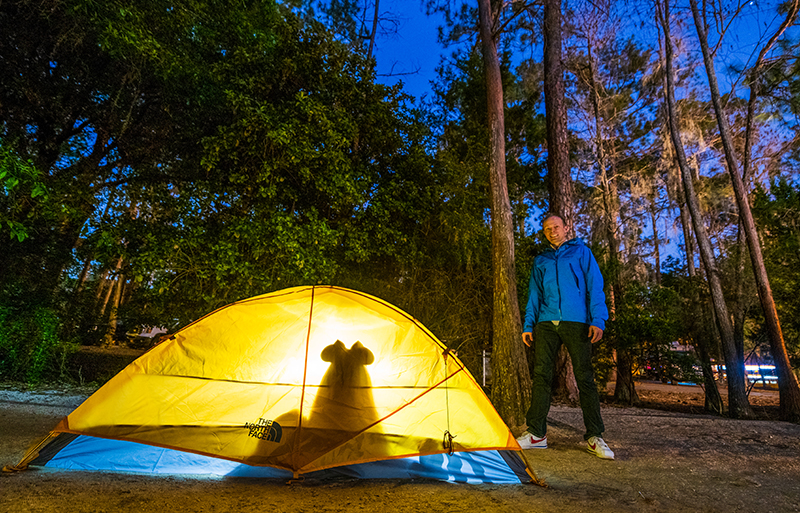 Disney Resort Hotels: Disney’s Fort Wilderness Resort & Campground, Copper Creek Cabins at Disney’s Wilderness Lodge, Treehouse Villas at Disney’s Saratoga Springs Resort & Spa and the Bungalows at Disney’s Polynesian Village Resort will temporarily close Wednesday, September 28 through Friday, September 30 due to the weather. We are contacting Guests with current and upcoming reservations since these locations will be closing.

Reservations for Dining and Other Experiences: Effective immediately, Walt Disney World will not enforce cancellation policies until further notice for dining and other experiences like Savi’s Workshop and Bibbidi Bobbidi Boutique.

Hoop-Dee-Doo Musical Revue performances have been canceled September 28-30 in light of the temporary closure of Disney’s Fort Wilderness Resort & Campground. Guests with pre-paid reservations will be automatically canceled and refunded. 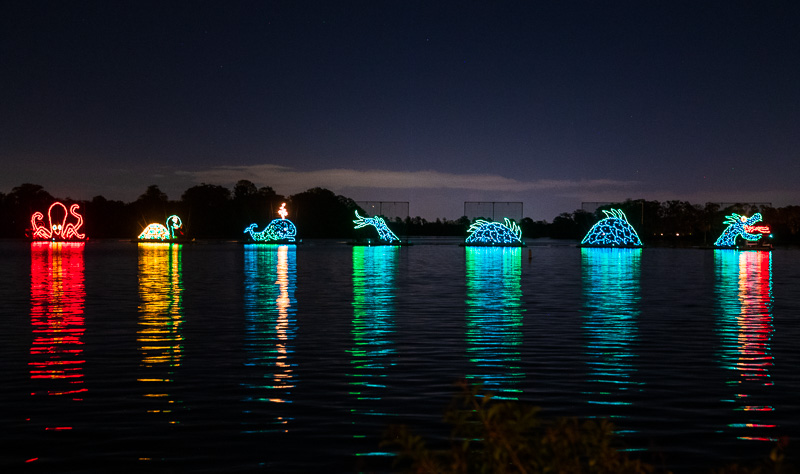 Walt Disney World is currently monitoring weather conditions and will communicate any changes to park operating hours or special events at a later time.

The most up-to-date information about temporary closures and impacts will be available via the My Disney Experience app and DisneyWorld.com/Weather (there’s nothing on this site…yet?). 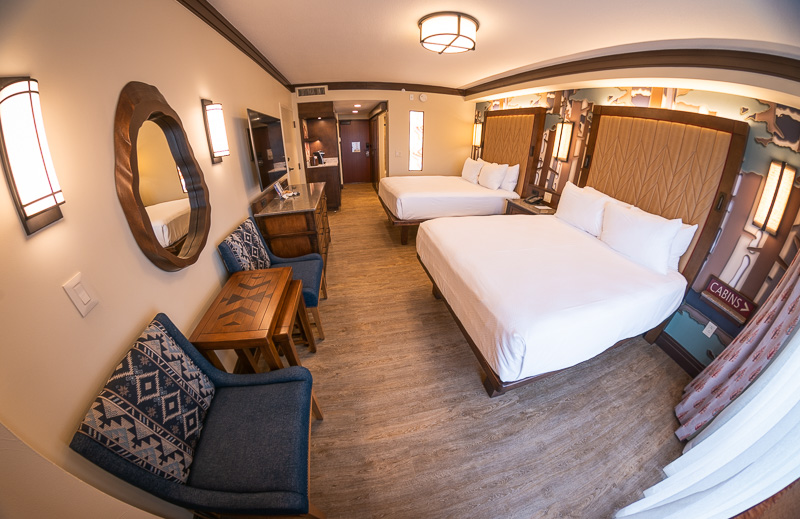 Although not mentioned there, Walt Disney World is quietly allowing changes and cancellations with no penalties for guests arriving between now and Monday, October 3, 2022. This applies to reservations booked by the Walt Disney Travel Company or Disney Destinations, LLC. (In other words, if you booked through Walt Disney World directly–either by phone or Disneyworld.com–you’re eligible. Same goes for reservations booked via an Authorized Disney Vacation Planner or travel agent.)

Most room-only and vacation packages can be modified, or cancelled online, including changes to travel dates, without fees. Packages including air transportation or other services provided by third parties, or those with travel protection, cannot be modified or cancelled online. Guests with these reservations will need to call Walt Disney World for assistance. (Expect longer-than-normal hold times.) 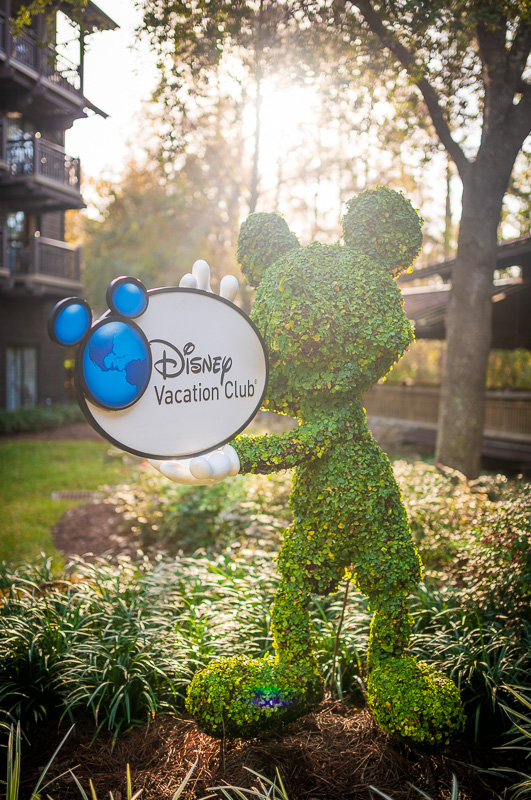 Another unknown is whether Walt Disney World resort hotels has lifted the pet restriction policy for arrivals between now and October 3, 2022. Even if this hasn’t officially happened yet, it almost certainly will occur. This is done because Disney’s resorts are a popular relocation option for coastal Floridians who must evacuate from their homes. (During Hurricane Irma, we met several families from the coast who brought their pets–seeing all of the pups was easily the biggest silver lining of being stranded here.) 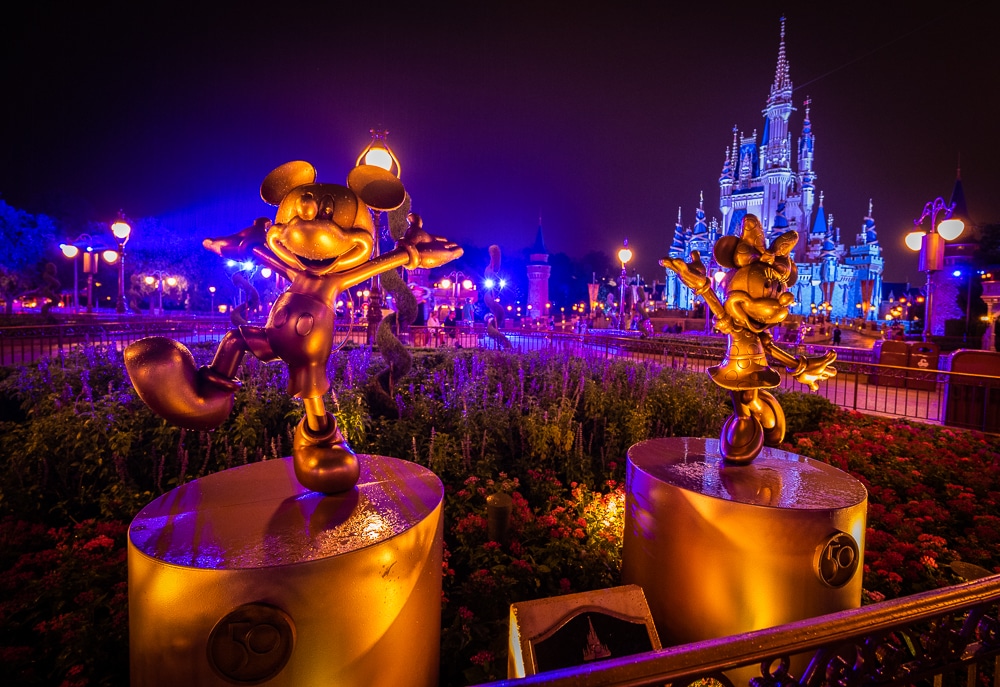 Currently, none of the Central Florida area theme parks have announced any closings.

If past precedent is any indication, Walt Disney World, Universal, etc., will all wait for a Hurricane Warning to be issued, and issue closures if or when that occurs. The only major Florida attraction closure at this point is Kennedy Space Center Visitor’s Complex, located on the coast, which will be closed Sunday and Monday. 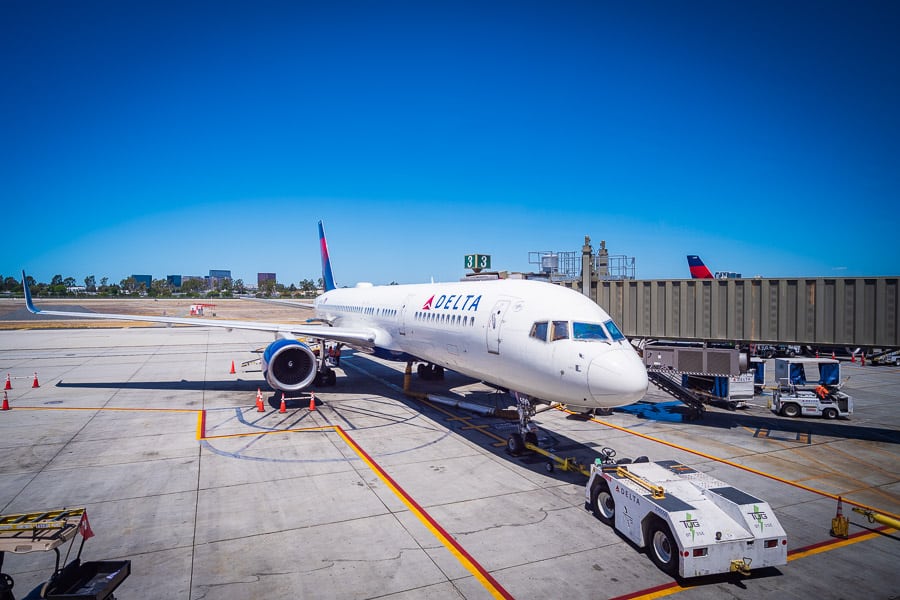 The airport is closely monitoring the status of Hurricane Ian to identify the potential extent of impact to airport operations. The airport is currently open and operational. Please check with your airline directly in regards to their operations for the most up-to-date flight information.

Should You Cancel or Reschedule Your Walt Disney World Trip Due to Hurricane Ian? 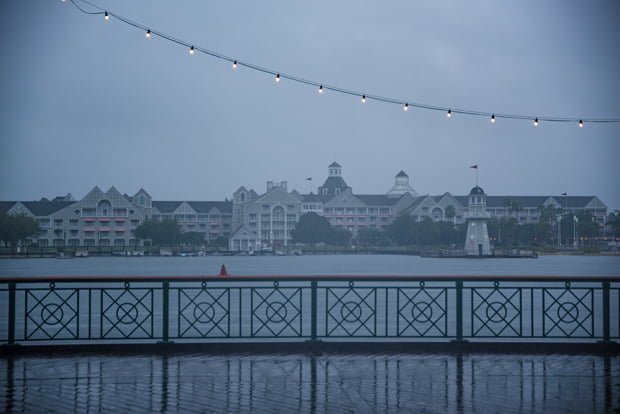 That’s a personal question and the answer largely depends upon your arrival and departure dates, expectations, and myriad other factors that are unique to your specific trip.

Rather than being presumptuous and making broad and sweeping statements, we’ll offer thoughts from our experience being stranded at Walt Disney World during Hurricane Irma several years ago as out-of-state tourists, and during Hurricane Dorian as locals a few years ago. From that, you can reach your own conclusions. 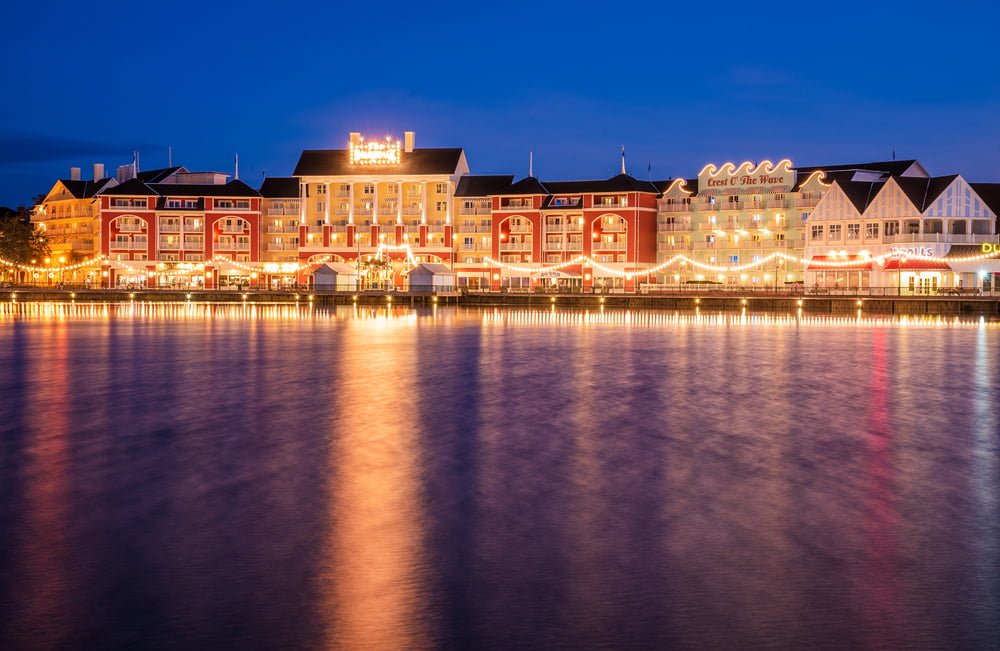 Hurricane Irma caused Walt Disney World to be closed for two full days and resulted in some damage around the resort. We got stuck in Walt Disney World after our Disney Cruise Line Bahamas sailing was canceled. The cancellation of this itinerary occurred relatively last minute, and rather than being proactive and cancelling the trip ourselves, we took a wait and see approach.

That was a mistake, and one we immediately regretted. By that point, we were unable to rebook our flight due to the mass exodus of people trying to leave Florida. We spent countless hours on the phone with Delta, and checked constantly as flights were added and modified, but kept coming up empty. Instead of going home, on a cruise, or to the parks, we spent a few nights “getting to know” the rooms at Disney’s BoardWalk Inn. 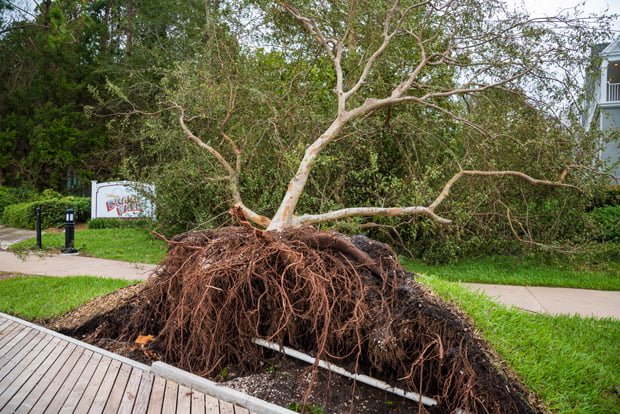 If you’re on the fence about whether to cancel or reschedule a Walt Disney World vacation right now, we’d strongly encourage you to read our more detailed Our Hurricane Irma Experience at Walt Disney World, which covers what we did to prepare for the storm, how Walt Disney World’s “ride out” Cast Members handled operations, and much more.

One thing we will stress here is that, contrary to popular reassurances, Walt Disney World is not the safest place to be during a hurricane. Wherever you live–where the hurricane isn’t–is safer.

Despite losing around 3 days of park time (and that’s not counting the hours spent wandering around Epcot and Disney’s Hollywood Studios essentially doing nothing while on hold with Delta), our experience with Hurricane Irma turned out fine. Cast Members were great, we felt safe throughout our stay, and Disney went above and beyond to make the most of the situation via entertainment and activities.

The hurricane itself didn’t cause much damage beyond some downed trees, which meant everything was back up and running quickly. Things could’ve gone worse; the parks could’ve been closed longer or attractions could’ve gone down, etc. Moreover, MCO could’ve stayed closed longer, and we could’ve had more difficulty booking a return flight home.

Things could’ve just as easily been far worse for us, and could still be worse for Hurricane Ian. Unfortunately, that’s something truly unknowable in advance. Walt Disney World is located in Central Florida and is less likely to see the same levels of devastation as coastal areas, but that doesn’t rule out catastrophic damage. 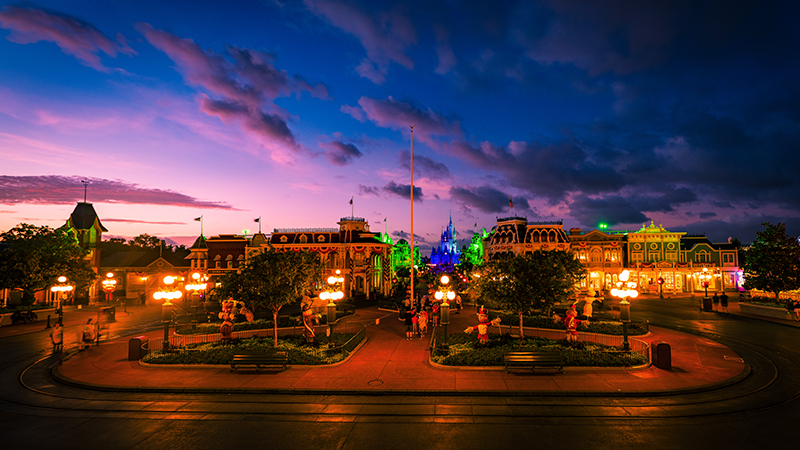 A few years ago, the circumstances were similar with Hurricane Dorian. That storm reached Category 5 status, and was the strongest hurricane in modern records to make landfall in the Bahamas. While portions of Central Florida were in the cone of uncertainty, models didn’t call for it to make landfall in Florida–and it didn’t.

Despite that, Walt Disney World’s parks closed at 3 pm on the day that Dorian worst impacted Florida. It was mostly uneventful–lots of rain and wind, but I don’t recall anything else. What I do recall were deluge of disruptions, and the Duo of Delightfully Dead Mickey’s Not So Scary Halloween Party nights that we attended. Due to cancellations, crowds were low both before and after Dorian. 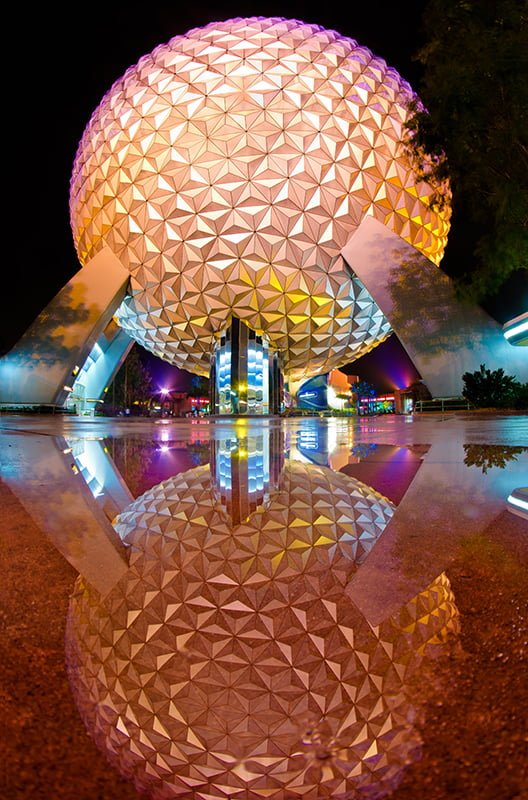 How Hurricane Ian will play out remains to be seen. It could end up similar to Dorian or Irma, or worse than both. The models showing it continue to shift east and make landfall near Tampa are definitely cause for concern, as is the National Hurricane Center director calling Hurricane Ian’s current forecast a “near worst-case scenario” for the Tampa area.

With Hurricane Ian, the best case outcome is the path drifting west towards the panhandle, which is what some of the spaghetti models are already forecasting. In that case, the biggest effect on trips would be several days of torrential rains and heavy winds at Walt Disney World, but no theme park closures.

It seems that whenever there’s a hurricane forecast to impact Walt Disney World, it’s met with a lot of positive wishful thinking and people touting the best case scenario outcomes. This is probably a mix of reassurances to those who are freaked out, and naivety about the potential dangers of hurricanes. We’re not here to fear-monger, but we’re also not here to offer rosy platitudes about the magic of Disney or safety. Whether to cancel or reschedule is obviously your call, but traveling to Florida when a hurricane is forecast is a decision you should not make lightly.

Are you currently at Walt Disney World or Central Florida? Have you visited during past hurricanes? Any additional info, thoughts, or first-hand experiences to share about riding out a hurricane at Walt Disney World? Do you agree or disagree with our advice? Any questions we can help you answer? Hearing your feedback–even when you disagree with us–is both interesting to us and helpful to other readers, so please share your thoughts below in the comments! Here's how many COVID cases crui... 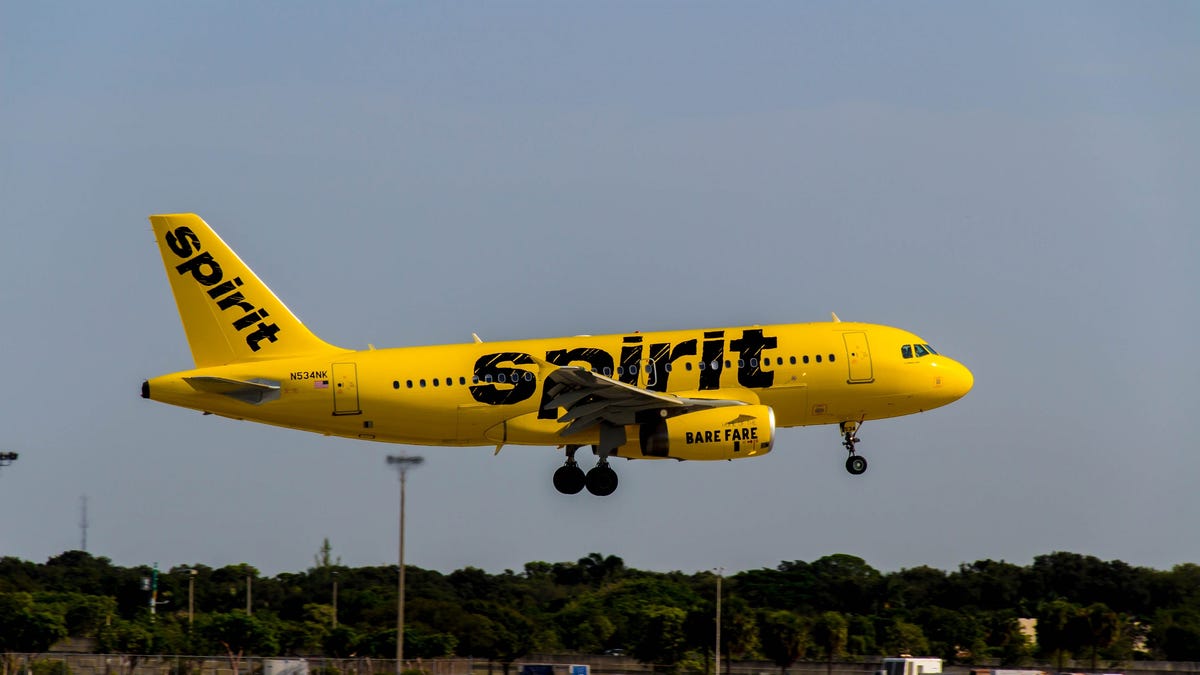