Hushpuppi: Notorious Nigerian fraudster jailed for 11 years in US 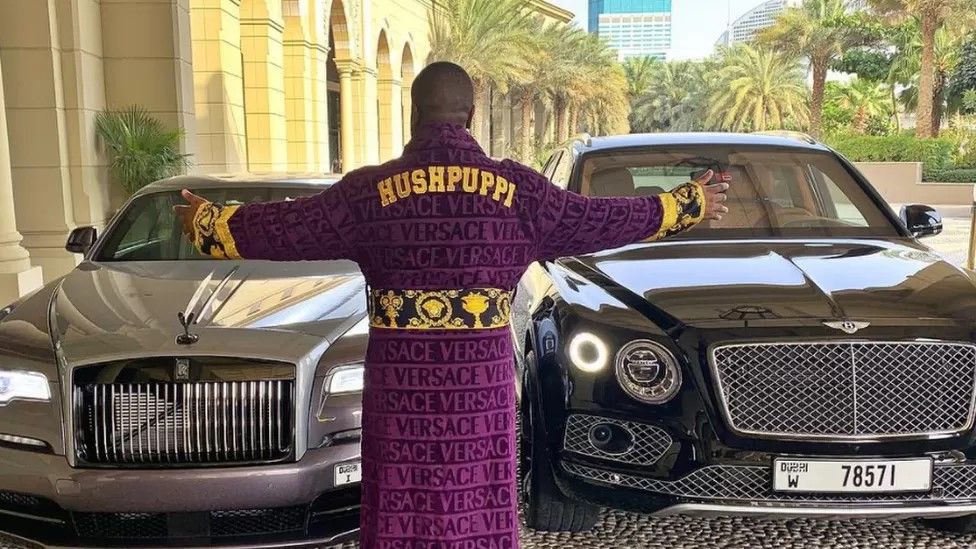 Hushpuppi's Instagram page remained available, even after he pleaded guilty to money laundering

A notorious Instagram influencer from Nigeria has been jailed for more than 11 years in the US for his role in an international fraud syndicate.

The influencer rose to fame flaunting his wealthy lifestyle on his page, which boasted 2.8 million followers.

But it all came crashing down when he was arrested in Dubai two years ago.

According to Don Alway, the assistant director in charge of the FBI's Los Angeles field office, Abbas had - behind the glitz of his account - become "one of the most prolific money launderers in the world".

"Abbas leveraged his social media platforms... to gain notoriety and to brag about the immense wealth he acquired by conducting business email compromise scams, online bank heists and other cyber-enabled fraud that financially ruined scores of victims and provided assistance to the North Korean regime," Mr Alway said in a court document on Monday.

Abbas pleaded guilty to money laundering last year, admitting attempting to steal more than $1.1m from someone who wanted to fund a new children's school in Qatar. Court documents in California say he played a key role in the scheme, playing "the roles of bank officials and creating a bogus website".

He also admitted to "several other cyber and business email compromise schemes that cumulatively caused more than $24 million in losses", the US justice department said.

Among them was a 2019 scheme, which plunged the European island of Malta into chaos as payment systems shut down after he tried to launder €13m ($13m) stolen by a gang of North Korean hackers from the Maltese Bank of Valletta.

At one point on Instagram, Abbas said he was a real estate developer and had a category of videos called "Flexing" - social media lingo for showing off.

In 2020, he renewed his lease for another year at the exclusive Palazzo Versace apartments in Dubai under his real name and phone number.

"Thank you, Lord, for the many blessings in my life. Continue to shame those waiting for me to be shamed," he captioned an Instagram picture of a Rolls-Royce just a fortnight before he was arrested.

Those who knew Lagos-born Abbas before his transformation into Hushpuppi allege these are not the first scams he has carried out.

He allegedly started his fraudulent lifestyle as a "Yahoo boy" - the Nigerian term for men who commit romance fraud by stealing other people's identities online and swindling their none-the-wiser lovers out of money.

A Lagos driver called Saye told the BBC back in 2021 that he developed a taste for the finer things in life - but was always "generous".

"He used to buy beer for everyone around," he said.

However, Abbas' supporters say he is a changed man.

According to Nigerian newspaper Permium Times, two imams wrote to the judge in Los Angeles appealing for leniency, saying he regularly helped out widows and orphans, as well as donating to things like feeding programmes.

Meanwhile, his wife said his arrest had plunged her into hardship - noting that she had to overtime in order to pay for their child's private education.

Abbas himself apologised for his crimes to Judge Otis D Wright in a handwritten note, saying he would use his personal funds to pay back his victims. He also said he had only made $300,000 from the crime he was being tried for.

However, he was still sentenced to 135 months in a federal prison.