In UK, tensions grow between protesters and scandal-hit police

London, United Kingdom – Jasmine is not new to protests, but until recently she had never come home with bruises. Nor had she ever been bitten by a police dog.

“Even if they [the police] are allowed to hit us, it’s supposed to be below the knee. Why do I have marks all up the side of my body?” she told Al Jazeera.

The 26-year-old from Bristol, a city in southwest England, is one of the thousands of people who have been taking part in a series of “Kill the Bill” protests against the Police, Crime, Sentencing and Courts Bill.

The draft law, backed by UK Prime Minister Boris Johnson, was introduced to Parliament on March 9.

Pictures Jasmine shared with Al Jazeera show visible bruising and injuries, which she alleges are the results of being struck with batons and shields, and being bitten by a police dog.

She says she had simply been exercising her right to protest on the night of March 26, and was doing so peacefully. 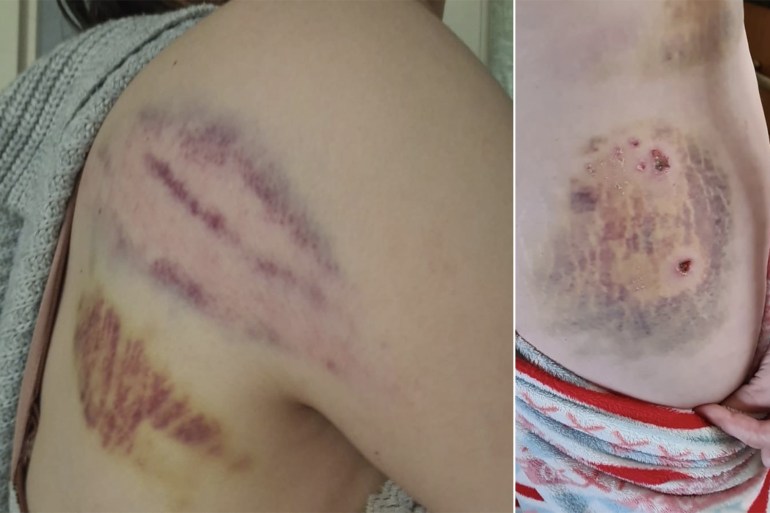 Pictures shared by Jasmine with Al Jazeera show visible bruising on her lower and upper body which she says are evidence of police brutality [Courtesy: Jasmine]

At almost 300 pages long, the bill proposes to increase police powers during protests.

This includes handing police chiefs greater authority to restrict “static” protests such as an assembly or gathering, noise levels, and start and finish times. Under the law, police do not have to give a warning that protesters could be arrested.

These restrictions can also be imposed on protests involving just one person.

Critics argue the bill would clamp down on an individual’s right to demonstrate peacefully.

The introduction of the bill came shortly after the killing of Sarah Everard, a 33-year-old British woman who disappeared on March 3. A serving police officer in London’s Metropolitan Police Force, 48-year-old Wayne Couzens, has been charged with her kidnap and murder.

Authorities did not give permission for a subsequent vigil in the capital planned for March 13 to go ahead, due to COVID-19 restrictions.

But, wearing masks and adhering to physical distancing measures, hundreds of people – including the Duchess of Cambridge – still attended.

A heavy-handed response from the police at the event led to widespread condemnation, including backlash from opposition Labour leader, Keir Starmer. 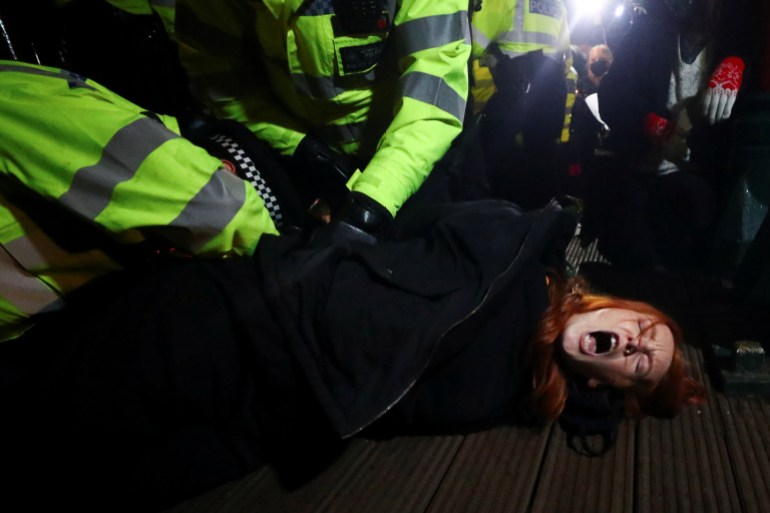 London’s Metropolitan Police were widely criticised for their response to a vigil organised to mark the suspected killing of Sarah Everard by a serving officer in the force [File: Hannah McKay/Reuters]A spokesperson for Sisters Uncut, a feminist group that attended the vigil, told Al Jazeera: “[Couzens’] Metropolitan Police colleagues brutalised us … The police waited until the sun went down before they really heavily started moving in, grabbing women, tackling them and throwing them to the floor.”

The spokesperson requested anonymity over fears of repercussions.

“Anyone who will see the footage of how the police have behaved and the incredible violence that they’ve committed will think, ‘Oh God, I don’t want that to happen to me if I go on a protest’,” the spokesperson said, “which is exactly what the government wants.”

Under the draft law, demonstrators could also face up to 10 years in prison for taking down a statue.

This comes after protesters in Bristol toppled a statue of the slave trader, Edward Colston, last year.

Speaking about the Bristol protests that Jasmine attended, Avon and Somerset Police told Al Jazeera that the force respects the right to protest, but believe its officers had used reasonable force to prevent crime, and to protect people and property. The force also acknowledged Jasmine had lodged a complaint about her treatment, but did not offer further comment.

Dozens have been arrested in the Kill the Bill protests, including legal observers.

Three of the four arrested on March 16 were minorities. All had been wearing jackets with the words “Legal Observer” marked clearly.

The organisation, which is led by Black and brown lawyers, provides free legal support to protesters.

Although it is not unusual to see legal observers arrested, it is becoming more common, a BPLS spokesperson told Al Jazeera.

“The police have been emboldened by the COVID-19 regulations, and by the Police, Crime and Sentencing Bill, to essentially act with impunity on the ground. And so the proportion of arrests of legal observers, and the reasons for arresting legal observers at the moment, are essentially a way for the police to exercise power, unchecked power,” the spokesperson said. 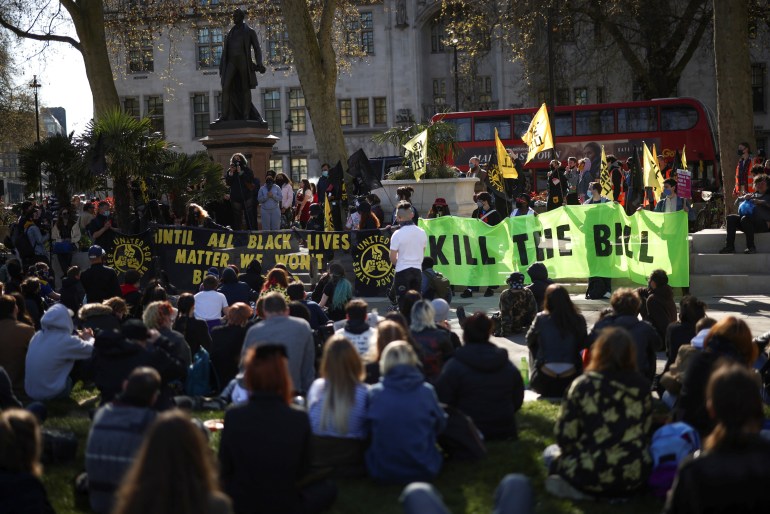 At almost 300 pages long, the proposed police and crime bill includes a litany of proposals to increase officers’ powers during protests [File: Henry Nicholls/Reuters]Meanwhile, UK based rights group Liberty has threatened legal action against the Metropolitan Police, arguing the arrest of the BPLS legal observers on March 16 was unlawful.

At the time of publishing, the Metropolitan Police had not responded to Al Jazeera’s request for comment.

That four of the six BPLS observers arrested were people of colour is of particular concern to the group.

The move could be seen as an attempt to suppress the ability of people from marginalised groups to monitor police conduct, the BPLS spokesperson told Al Jazeera.

Legal observers work voluntarily. For any individual, the role comes with personal risks, but for observers of colour, there is the added factor of race to consider.

The experience of BPLS observers, the spokesperson said, “is something that is absolutely mirrored in what’s happening to protesters”.

“And we’re very clear that any increase in police powers, including through this new bill, will disproportionately and sharply impact racialised protesters. And so we’re now seeing that mirrored in the position of legal observers.”

At the same time, the observers say they witnessed a high number of Black and brown protesters being arrested at the protests. 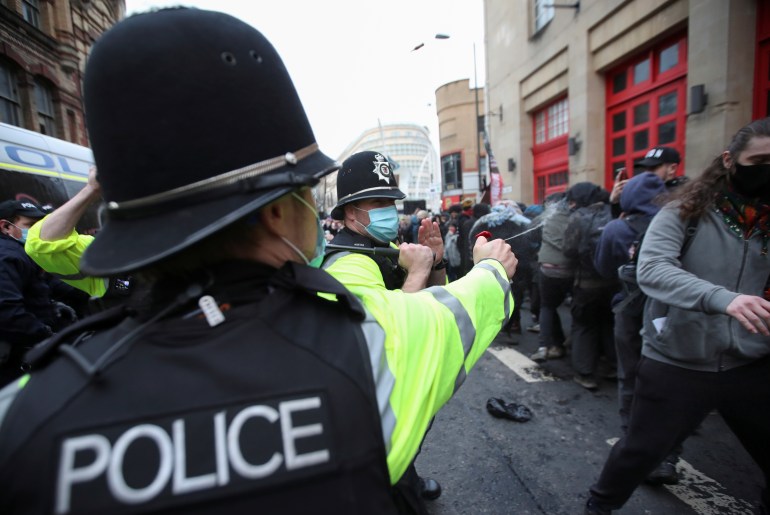 Thousands of people have taken to the streets in cities across England and Wales to demonstrate against the draft police and crime bill since it was introduced to the UK Parliament in early March [File: Peter Cziborra/Reuters]Back in her apartment in Bristol, Jasmine holds up one of her hands on Zoom.

She winces as she touches her knuckles and explains how she got her injury.

“I intervened when I saw a woman getting hit actively around the head and around the neck area, and I put my hand up,” she said.

“As I put my hand up to protect her face, the baton came down and just smashed through it … and still, my left hand, even touching it is still painful.”

The other protester was a Black woman – a detail, Jasmine says, is important.

Reflecting on the past few weeks, she said Black protesters, and Black women particularly, were policed more heavily.

The bill at the centre of the controversy, she fears, will disproportionately affect people from minority communities.

“So if I went and protested, even if the bill passes, I probably won’t feel the wrath of it as much as other people in different demographics,” she said. “It’s just another way to kind of streamline discrimination.”

According to Liberty, the bill aims to usher in new stop and search powers.

People of colour are already disproportionally profiled by police. 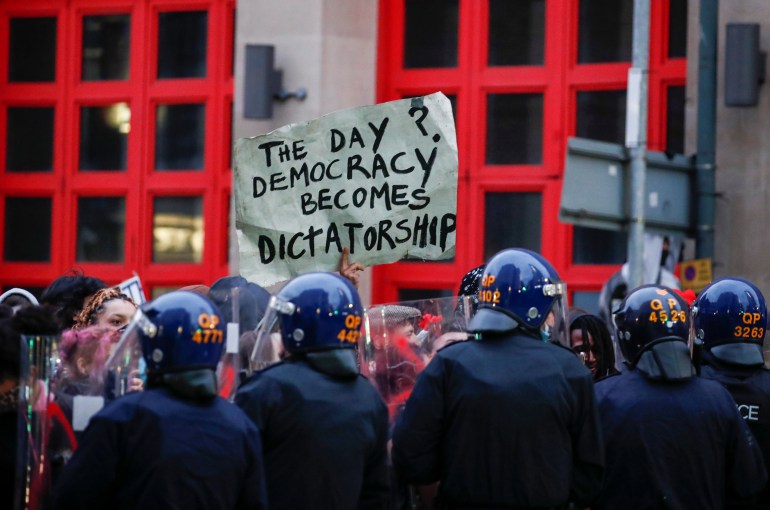 A demonstrator holds a placard during a protest against the proposed policing bill in Bristol on March 21 [File: Peter Cziborra/Reuters]“It’s not just against people who are speaking up against injustice, at protests, it’s against Black people, because there’s going to be increased powers on stop and search, which are absolutely unprecedented,” said the Sisters Uncut spokesperson.

“We know that’s going to affect Muslims more, too. And the provisions that they’ve put on Gypsy Roma and Traveller communities, which will allow the police to seize their vehicles, ie their homes, is incredibly racialised,” the spokesperson added, warning of an emerging “police state”.

“I think people are very hesitant to use the term,” the spokesperson said. “But what else are we talking about here?”