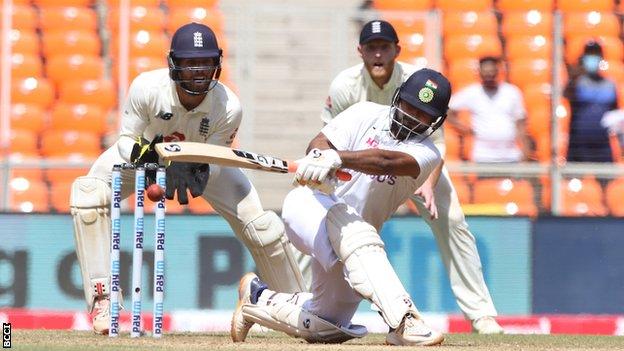 In extreme heat, Stokes' huge effort brought the wickets of Virat Kohli and Rohit Sharma to help reduce India to 146-6 in reply to England's 205.

But Pant counter-attacked in thrilling style, climbing into a tiring England attack for 101 from 118 balls, with 13 fours and two sixes.

Pant shared a seventh-wicket stand of 113 with Washington Sundar, who remained unbeaten on 60 as India reached 294-7, 89 ahead.

Leading 2-1, India need to avoid defeat to win the series and secure a meeting with New Zealand in the World Test Championship final.

Reaction to day two in Ahmedabad

This was a wonderful day of Test cricket, an arm-wrestle for control on a pitch that is threatening to deteriorate.

For two sessions, England were as good with the ball as they were bad with the bat on Thursday, giving the hosts little respite.

However, even though Dan Lawrence's 46 on day one was crucial, the decision to extend their batting left England short of a bowler late on day two, especially with off-spinner Dom Bess looking devoid of confidence after being left out for two Tests.

Pant cashed in with a memorable century that delighted the smattering of spectators inside the world's biggest cricket stadium.

England still have the opportunity to post a fourth-innings target that could be tricky to chase on the wearing surface.

But the likelihood is that Pant has played a defining, series-winning innings.

When Pant was joined by Sundar, India were still 59 behind and in danger of giving away a first-innings lead.

The wicketkeeper, who played a crucial innings on the final day of India's series win in Australia, began by curbing his attacking intent, before unleashing the full range of his strokeplay. His first 63 balls brought 37 runs. The next 55 brought 64.

On 35 he survived a marginal lbw shout from Bess in the final over before tea. On his return after break, Pant upped the intensity as England opted to bowl Bess and Joe Root instead of their frontline trio of Stokes, James Anderson and Jack Leach.

Pant found another gear when England took the second new ball, audaciously reverse-sweeping Anderson over the slips, then went to his third Test century by slog-sweeping Root for six.

After Pant heaved to mid-wicket to give Anderson his third wicket, Sundar continued to play correctly and with composure in an unbroken stand of 35 with Axar Patel.

Sundar overturned being given lbw to Bess in the penultimate over of an evening session which yielded 141 runs.

England run out of steam

Before Pant's pyrotechnics, England dragged themselves back into contention thanks in no small part to Stokes, whose bowling evoked memories of the marathon spell he produced at Headingley in the same Test as his career-defining century to defeat Australia.

Showing no sign of the stomach bug which he has been suffering from, Stokes bowled at high pace and generated prodigious swing. Kohli was caught behind off a brutal lifter for a duck, while Rohit was deceived by a huge inswinger to be lbw for 49.

Anderson, who has also been ill, was just as good. Miserly for most of the day, he had Ajinkya Rahane edge to second slip for 27.

Bess, however, could not be trusted, bowling a number of full tosses and log hops. It was hard not to feel for him after he was left out earlier in the series for Moeen Ali, who was then asked to stay on, only to leave for his planned period of rest.

With Root nowhere near close to recapturing the magic of his 5-8 from the previous Test, England were a bowler light and, by the evening session, exhausted and out of options.