Quito, Ecuador – As night turned to dawn in the early morning hours of October 26, Indigenous communities had already woken to begin the most recent “paro nacional”, or a national shutdown in English, by bringing main transit arteries to a halt in the countryside and launching a day of protest in Ecuador.

The demonstrators’ plan: to peacefully enter the heavily fortified presidential palace. Metal fences and riot police blocked the streets leading to the palace.

“A few days ago, the president labelled me a destabiliser,” said the president of the Confederation Indigenous Nationalities, or CONAIE, Leonidas Iza addressing reporters.

“Ecuadorians do not have time for this: We’re all concerned about the economic issues.”

By noon, a government spokesperson said police had detained 18 people at roadblocks.

Under pressure from CONAIE and Indigenous legislators, Lasso announced last week he was freezing the monthly increases of fuel prices, but fixed new prices slightly higher than those that were expected to go in effect in October with petrol a fixed $2.55 a gallon ($0.67 a litre) and diesel $1.90 a gallon ($0.50 a litre). 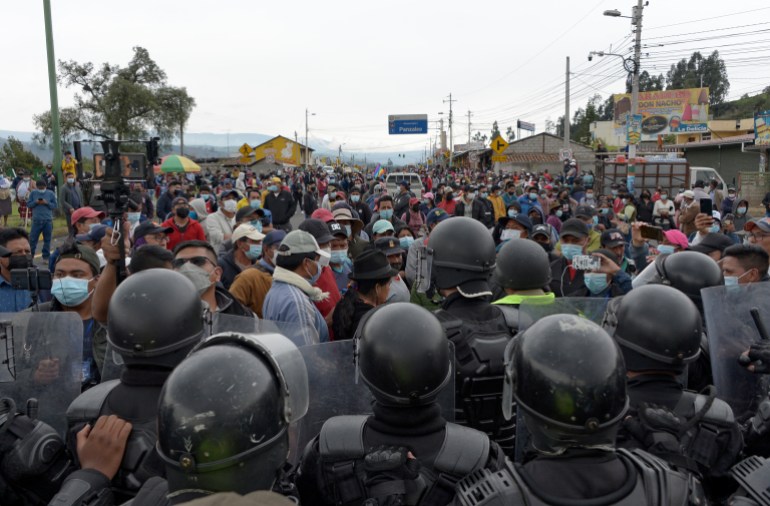 “We have listened to you, the people, and also to political and social sectors to reach an agreement which brings us stability, in which the economy and grow and create jobs,” Lasso said in a national message to the country Friday.

CONAIE rejected the president’s announcement and said protests would go forward as planned.

Now more than five months on the job, Lasso faces a migration crisis of Ecuadorians leaving for the US-Mexico border and a bloody gang war in the prison system.

With just days before the COP climate summit converges in Glasgow, environmentalists have lambasted the president for committing to double Ecuador’s oil production during his term, setting up likely confrontation between remote Indigenous communities in the Amazon and state security forces. 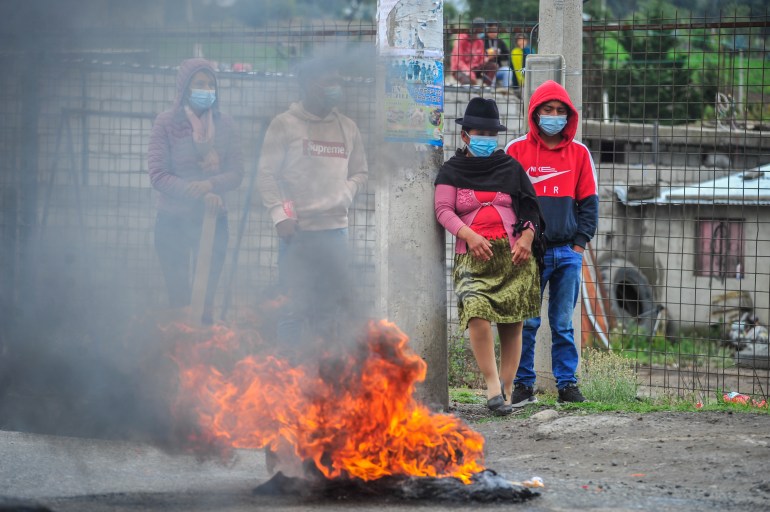 An Indigenous woman looks over the scene at a roadblock in Ecuador’s center-Andean province Cotopaxi on October 26, 2021 [Juan Diego Montenegro/Al Jazeera]

Lasso did not appear in front of the legislative committee’s investigation on the Pandora Papers last week and has denied wrongdoing after being named in last month’s report. The national prosecutor’s office also launched a probe in Lasso’s offshore holdings.

With the intention to combat crime and drug-related violence, Lasso declared a 60-day state of emergency last Monday. The decree allowed for rapid deployment of the police and armed forces to conduct routine checkpoints in hotspots.

But organisations denounced the move as a tactic to quell Tuesday’s planned demonstrations and shutdown. 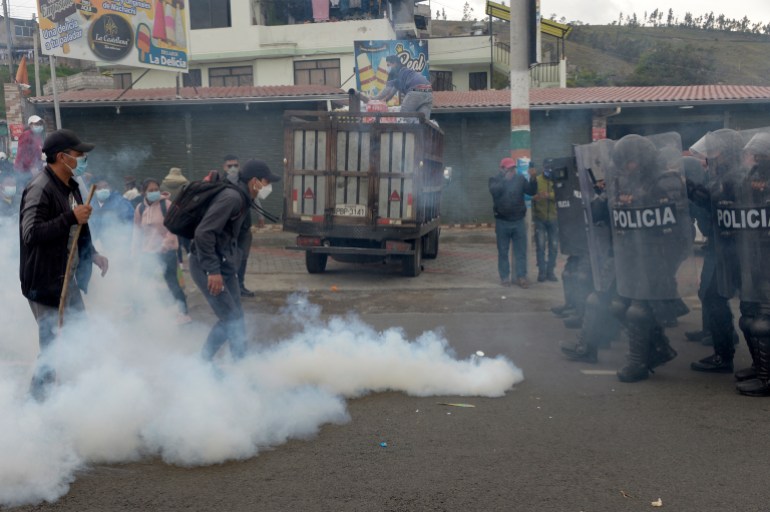 An apparent standoff between demonstrators and police in Panzaleo, Cotopaxi Province, Ecuador, on October 26, 2021, during a protest against the economic policies of the government [Rodrigo Buendia/ AFP]

Speaking to reporters in Quito on October 18, US Secretary of State Anthony Blinken supported Lasso’s security declaration but said “these measures need to be taken pursuant to the Constitution.”

“[The measures] need to be very focused in what they’re seeking to achieve and finite in duration and … follow and proceed in a way that upholds democratic principles,” said Blinken during a three-day visit to Ecuador and its neighbour to the north, Colombia.

Tensions between Lasso and CONAIE have escalated for months and on October 4, a meeting at the presidential palace between the two sides resulted in a deadlock with no viable solution for bringing down fuel prices and oil exploration in Ecuador’s rainforest.

In October 2019, there was a 10-day nationwide shutdown after then-President Lenin Moreno implemented an austerity package that would have cut decades-old fuel subsidies.

Forced to backtrack by overwhelming social discontent, Moreno signed an executive decree allowing for gradual monthly increases to fuel beginning in May 2020.

Lasso inherited the problem of fuel price rises, which has continued to shape Ecuador’s political, economic and social landscape. 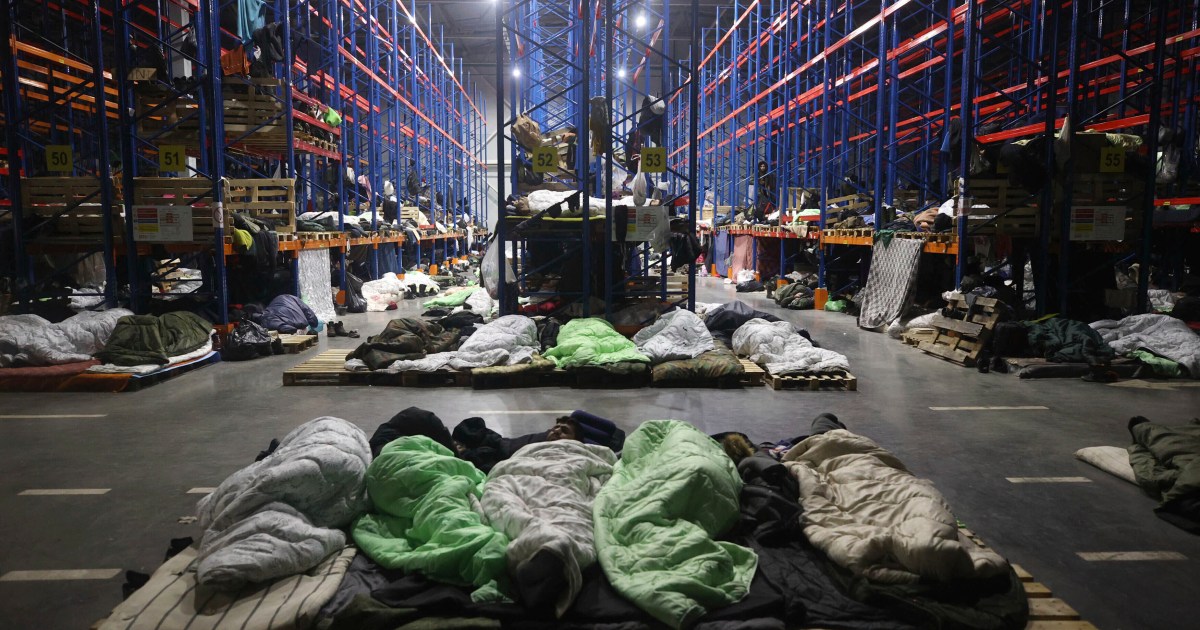 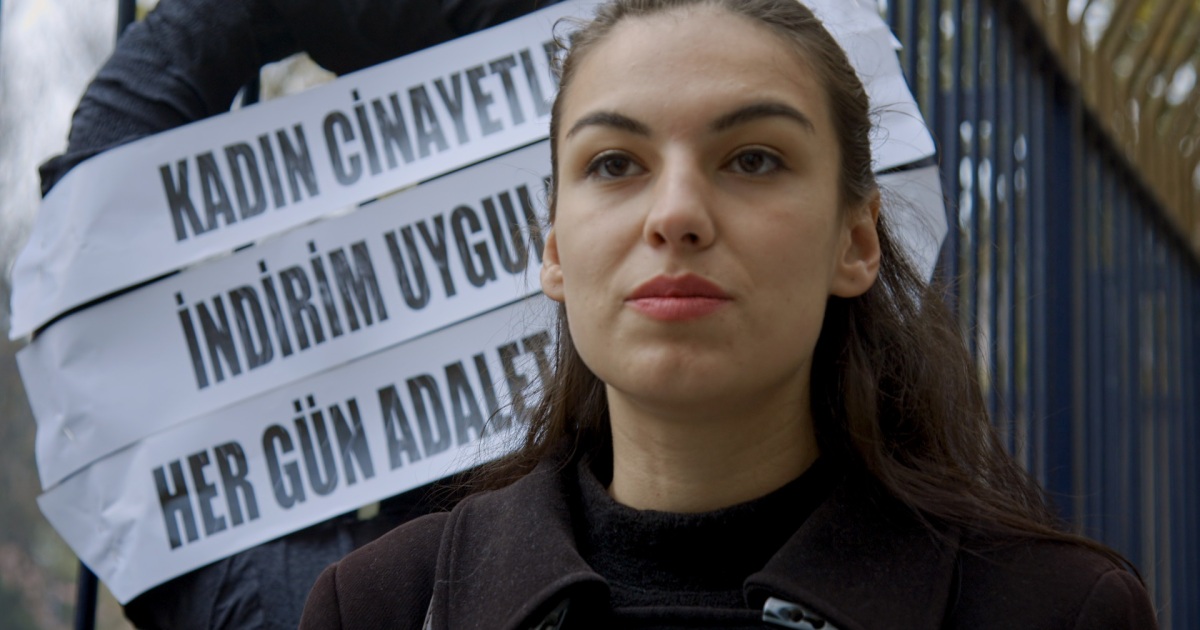 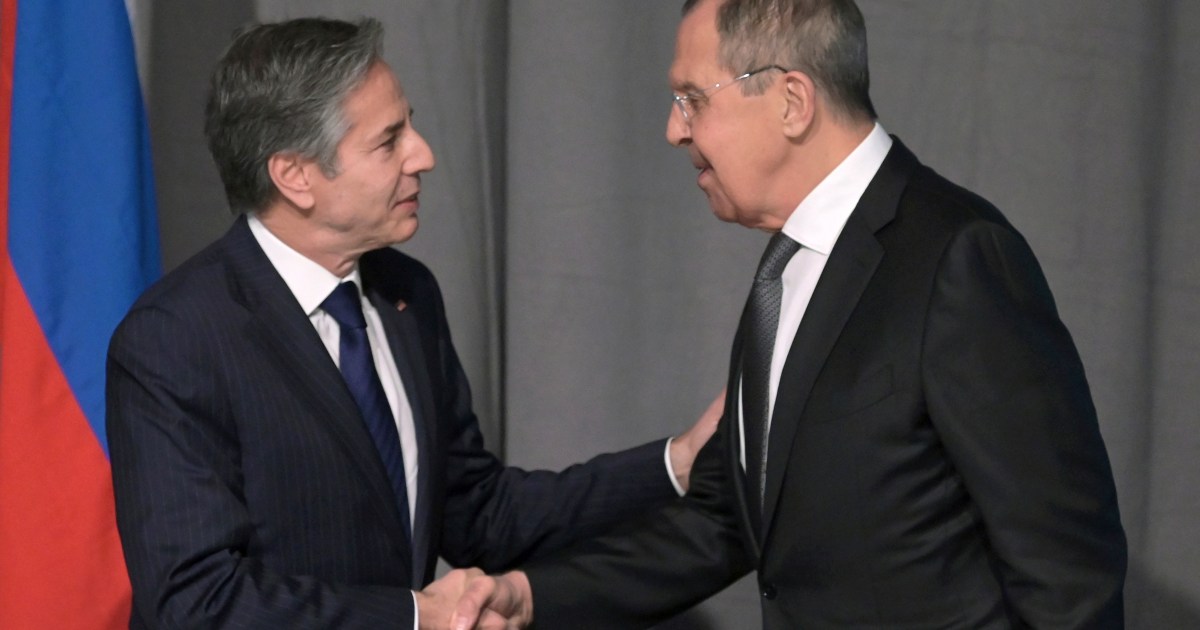