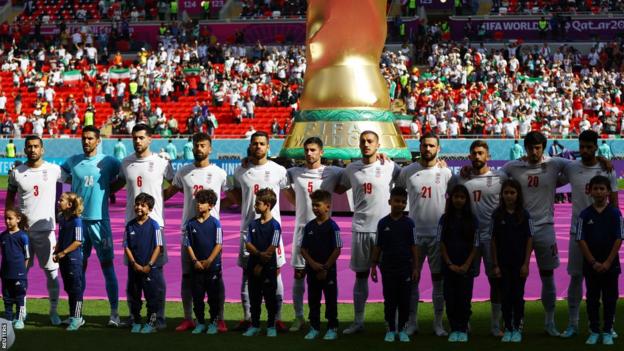 Iran's players sang their national anthem before Friday's World Cup game against Wales after not doing so before their opener against England.

As the players joined in with the anthem on Friday, loud jeers could be heard from Iran fans in the stadium.

Mass protests in Iran in recent months have been met with a fierce crackdown.

They have been sparked by the death in custody in September of Mahsa Amini, a 22-year-old woman who was detained by morality police for allegedly breaking the strict rules around head coverings.

Human rights activists have said more than 400 protesters have been killed and 16,800 others arrested in a crackdown by Iran's security forces.

Iran's leaders say the protests are "riots" orchestrated by the country's foreign enemies.