Ireland 'a lot to do' after stellar year - Farrell 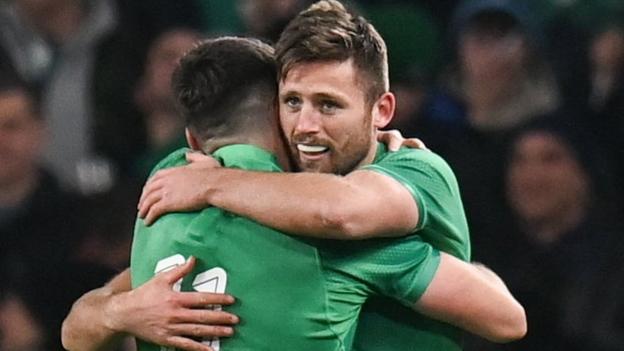 Ireland head coach Andy Farrell says his team still have "a lot to do" ahead of next year's World Cup despite the excellent 2022 they have enjoyed.

Saturday night's home victory over Australia made it a hat-trick of Autumn Series wins that started by them beating world champions South Africa.

That came after the Irish completed a first-ever away series win over New Zealand in the summer.

"With a lot to do," Farrell said when asked where they stand ahead of 2023.

"That is great and that is the reality. We have certain aspects of our game, as always, that we would love to get better.

"We can analyse that game [the win over Australia] until the cows come home and get better but we have got to keep pushing forward with all aspects of our game.

"We have got be more innovative as a coaching staff so we expect when we come in for the Six Nations to improve our game and keep pushing on forward."

Saturday night's match at Dublin's Aviva Stadium was a tense and cagey encounter, with a 77th-minute penalty from substitute fly-half Ross Byrne, only in the squad after captain Johnny Sexton pulled out injured minutes before kick-off, giving the hosts a dogged 13-10 victory.

As well as capping a stellar year for Farrell and his players, it maintained their status as the world's top side but the head coach continued to insist that he pays very little attention to what he described as an "irrelevant" world ranking system.

"I actually still don't know how the points system works," he continued.

"I can't be really bothered trying to work it out because it is a little bit irrelevant in the sense that we want to keep improving our performances, keep pushing forward and testing ourselves.

"But the people that deserve the accolades are the lads [the players] that put the work in.

'The Autumn games have been great for us'

Ireland made it three wins from three in the Autumn series

Losing captain Johnny Sexton at the last minute, to a calf strain sustained in the warm-up, meant Jack Crowley had to start at fly-half with Byrne taking his place on the bench.

Farrell expressed sympathy for his influential skipper, who had missed the win over Fiji the week before with a dead leg, but said he welcomed his squad being challenged.

He also reflected positively on an Autumn Series that delivered three victories - even if the performances were not particularly eye-catching.

"It's not ideal [losing Sexton so late on] but to find out in a window like that is fantastic for us as a group," he said.

"I think the Autumn has been great for us. I don't think we have played our best rugby but to play against South Africa, that was a test everyone wanted to see us manage, and we did that pretty well.

"We had a bit more of an opportunity against Fiji and learnt some good lessons from that.

"We haven't played Australia for five years. We don't take anything on that we know is coming out from the media in regards to their form because we know that the Australian mentality means that when their backs are against the wall they are always going to come and produce a performance like that.

"I just said to the boys that they have got to get used to it. We have got to get better and raise our standards because the reality is that people coming to the Aviva now expect us to play at our very best, and we have got to be better in that regard."