Japan prepares to bid farewell to assassinated leader as anger grows over the cost of the state funeral and his party’s ties to the Unification Church.

Japan is set to honour former Prime Minister Shinzo Abe, who was killed while on the campaign trail in July, with a rare state funeral that has deeply split the nation.

Some 4,000 mourners — including United States Vice President Kamala Harris and Indian Prime Minister Narendra Modi — are expected to attend Tuesday’s ceremony for Abe, who was Japan’s longest-serving prime minister. Hundreds of Japanese lined up outside the funeral venue in the capital, Tokyo, ahead of the official ceremony to offer floral tributes to Abe.

But the event, which is costing taxpayers some $11.5m, as well as revelations about ties between Abe, his ruling Liberal Democratic Party (LDP) and the South Korean Unification Church, has prompted a huge public outcry in Japan.

Critics consider the religious group a “predatory cult” responsible for forcibly extracting exorbitant donations from its followers in Japan.

The relatives of Abe’s assassin, Tetsuya Yamagami, say the 41-year-old’s mother donated some 100 million yen ($692,000) to the group, bankrupting his family. Yamagami has told investigators that he shot Abe on July 8 because of the prime minister’s support for the church. An internal LDP survey has since found that nearly half the governing party’s 379 national legislators also have ties with the church and affiliated groups. These range from attending the church’s events to receiving donations and accepting volunteers for election support. 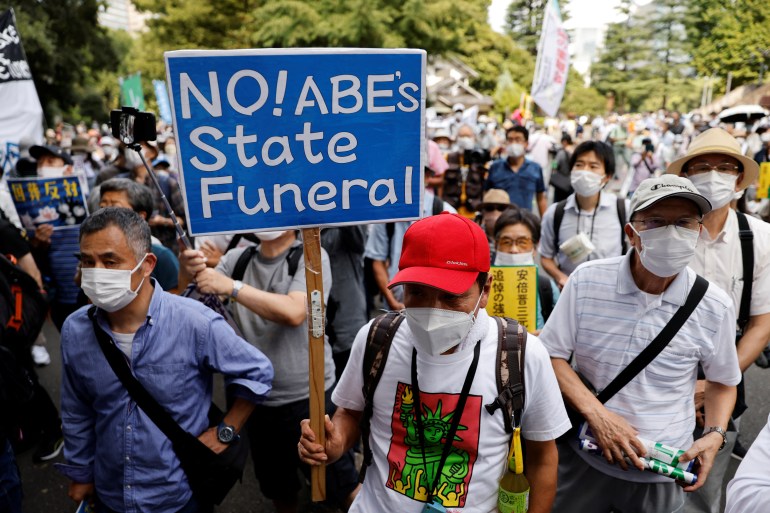 But Kishida has defended the state funeral as necessary because of Abe’s achievements.

The incumbent leader, the heads of Japan’s lower and upper houses of parliament, and the chief justice will speak at Tuesday’s event.

It will begin at 2pm local time (05:00 GMT) with Abe’s ashes carried into the venue as an honour guard fires 19 rounds from a cannon.

Security has been tightened in Tokyo, with schools in the vicinity of the funeral venue closed and some 20,000 police officers mobilised to ensure security for the event. Protests against the funeral are expected, with some 62 percent of respondents surveyed by the Mainichi newspaper saying they do not approve of holding such an event.

Critics say Abe is also not deserving of the honour because of his legacy of divisive policies.

These include Abe’s push to revise Japan’s pacifist constitution, and nationalistic rhetoric that soured relations with neighbouring countries, including South Korea. 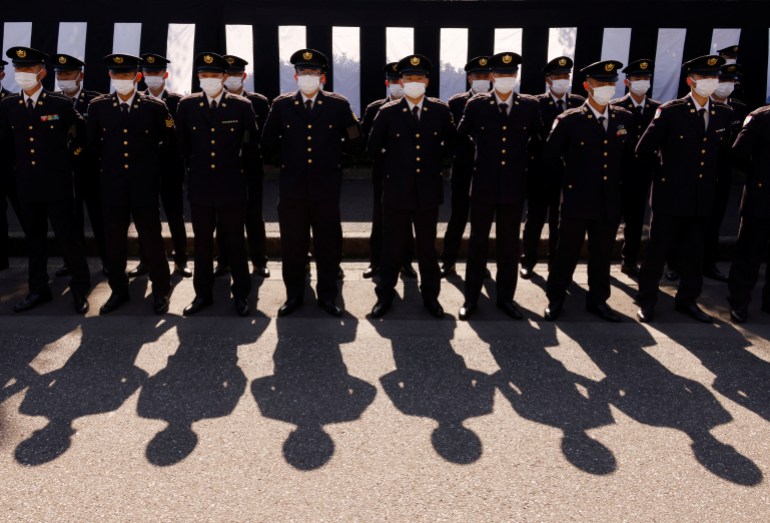 Members of Japan Self-Defence Forces will take part in the funeral, which has divided opinion in Japan and led to a sharp drop in support for the government [Kim Kyung-Hoon/Reuters]

The former leader, at the time of his resignation for health reasons in 2020, had also become mired in scandals in which he was alleged to have misused political funds and engaged in cronyism. He was also facing criticism at the time for his poor handling of the COVID-19 pandemic and his determination to hold the Tokyo Olympics and Paralympics despite the outbreak of the disease.

“Kishida’s decision to honour Abe with a state funeral without consulting the Diet or judiciary smacks of exactly the arrogance of power that the public associates with Abe. By a 2-1 margin the public opposes the state funeral and much of this opposition can be attributed to Abe’s toxic legacies and limited achievements,” said Jeffrey Kingston, professor of history and Asian studies at Temple University in Japan.

“Polls suggest few believe Kishida has handled the Church issue competently and this is part of the reason he has plunged in the polls. Supporters hope it will all blow over but the media spotlight may sustain the anger and now there are the Olympic bribery scandals that provide further reminders about the sleazy ways and means of the Abe government.”