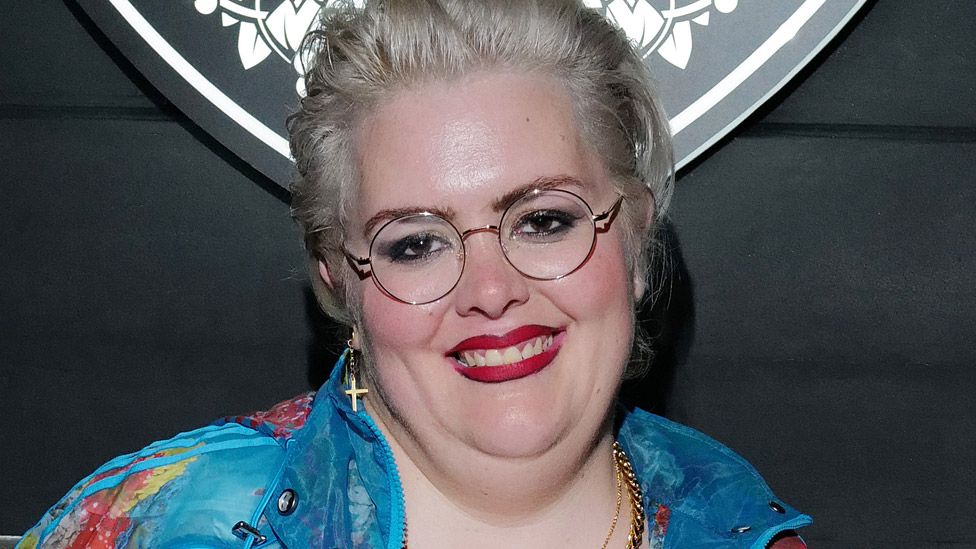 Everything comedian Jayde Adams has done in her fast-rising career has been with the aim of getting on Strictly Come Dancing. Now she has made it, she explains the very personal reason she was desperate to take part.

From the age of five to 17, Jayde Adams would regularly take part in freestyle disco dancing competitions with her older sister Jenna.

"I wasn't a very confident dancer," says Adams. "I've always been fat. I'm a really good dancer, but in freestyle disco dancing, back when I used to do it in the 90s, there was a real stipulation over what you looked like when you did it.

"My sister really fitted that mould. I didn't. We used to have to dance together because we were sisters and it was easier. And I'll be honest with you, I think I held her back a bit."

In 2005, Jenna had a seizure out of the blue. It turned out she had a brain tumour, and she died six years later, at the age of 28. Jayde hasn't danced with anyone else since.

Jenna didn't get to see her sister's rise in stand-up comedy, acting and TV presenting. Jayde had her own 2020 Amazon Prime special, currently has an in-demand Edinburgh show, has hosted TV's Snackmasters and Crazy Delicious, and has had acting roles in sitcom Alma's Not Normal and the forthcoming Take That jukebox film Greatest Days.

Jenna did not really get stand-up, Adams says. She did, though, get dancing.

"I think the most bittersweet thing about it is that she's not going to see it," Adams says of her Strictly appearance, pausing as she becomes emotional.

"It's quite intense, I'll be honest. It's a big thing for me and my family that I'm doing it, and I'm going to try my hardest not to cry every week because I know how annoying that is, because I've watched the show for years."

Adams on stage at the BBC Funny Festival Live in 2021

Adams proves her devotion by reeling off the names of the winning couples from the show's start, having only missed it in 2011 when she moved to London to launch her comedy career.

After officially joining this year's line-up at the weekend, there have been a range of reactions. "One of my funniest things that I've loved on the internet is I've now become part of the Strictly conversation.

"One of my favourite things is people going, 'But she's a trained dancer! She did competitive freestyle disco dancing when she was younger! Surely that's against the rules!'

When she takes to the dancefloor next month, she will be "in it to win it", she says. Not just to honour her sister, who would have been "jealous as hell, but so proud", but also to change expectations about female body image.

"I know that there is going to be some men - it's always men - on the internet who have got opinions about my body," she says.

"But what I hope I do with this show, and the choice of outfits that I wear, is show people like me across the UK exactly what an incredibly confident and accomplished woman looks like, for weeks and weeks on end until I get to December and I hold the glitterball trophy up in the air.

"That's what I want to do, thus hopefully ending every single conversation that there has to be about a woman's image."

Adams' last stand-up show - which was filmed for the streaming special - was originally titled The Ballad of Kylie Jenner's Old Face, before "my lawyers said it was probably not wise that I spend all the money that I earned from the Amazon Prime special on lawyers".

Livid with the Kardashians

It was renamed Serious Black Jumper after the item of clothing she said she started wearing to make people take her more seriously - and tackled, among other things, feminism and how she thinks celebrities have undone years of progress.

"We live in a world where we're given this ideal of what a woman should look like, and it's the bloody Kardashians' fault," Adams says.

"I go on about them too much. But I'm livid, because there was so much work done with all of that stuff. Our images are irrelevant. It's all about confidence. I am proof of that.

"I know sometimes people spend their entire lives trying not to look like me, and then I turn up and I've got more confidence and pizzazz than they could ever hope to have, and it drives them wild. And I hope it continues to."

Adams' current Edinburgh show is titled Men, I Can Save You

This time, her live show, which has just begun in Edinburgh before going on tour, tackles masculinity, with an intriguing offer in the title: Men, I Can Save You.

"Through a series of elimination, I've got rid of all of the stuff I can't joke about, and all I'm left with is straight white guys."

The offer to save men is made in jest, but also not. This is, by her own admission, "perhaps my time to lean into the self-help route but obviously with a tongue in cheek aspect to it".

'Men are losing a lot of power'

She does, though, talk seriously about the benefits of therapy, and how the path to self-acceptance and happiness is letting go of negativity and trauma. Self-help speak creeps in as she explains that she wants to spread that lesson.

"Men are losing a lot of power at the moment and I'm just out there asking them to say, OK, you might be losing this sort of fake reality of power that you think you've got because the world tells you you've got it, but actually what's really true and real is this forward motion of love."

She talks about things she has let go of in her own life, from toxic school pressures to anxiety-inducing WhatsApp groups, and says it has given her the power to go after what she wants.

"I suppose every step I've taken, including the Edinburgh Fringe, has been to get myself on Strictly," she says.

Has that really been her plan all along? "Oh, yeah, absolutely. I manifest stuff all the time. It happens all the time.

If she does manage to manifest the glitterball trophy into her hands come December, it is safe to assume someone will have been smiling down on her.

Men, I Can Save You runs from 9 to 28 August at the Pleasance Courtyard, Edinburgh.