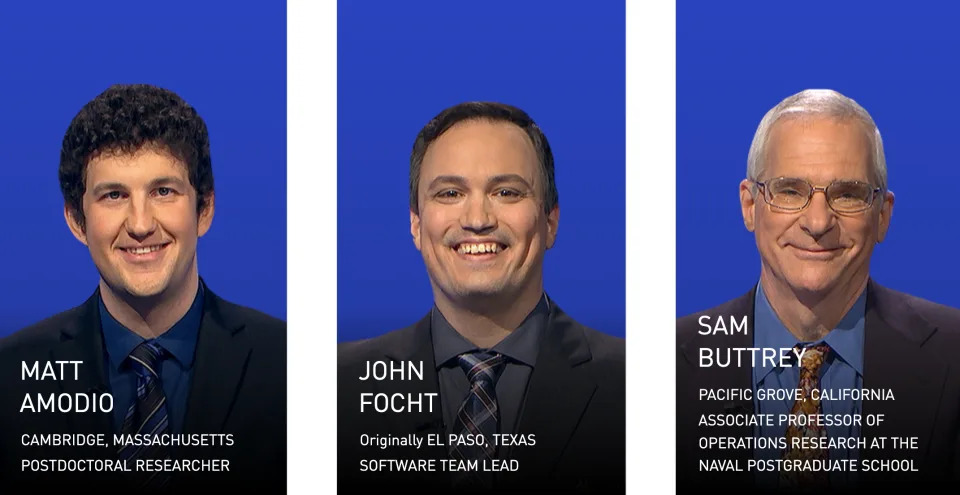 Matt Amodio, John Focht and Sam Buttrey faced off in the Tournament of Champions. (Photo: Jeopardy.com)

High-profile Jeopardy! champion Matt Amodio, who set the record for the second-highest number of consecutive wins on the show, second only to host Ken Jennings, in his initial run, was back behind the buzzer Thursday for the second semifinal game in the Tournament of Champions. His formidable opponents: Tournament champion (and Steve Martin look-alike) Sam Buttrey, and four-game winner John Focht.

Almost from the start, Amodio was chasing the lead.

All three contestants struggled in a category called "Celebs," in which they failed to identify Mila Kunis, Charli D'Amelio and the star of HBO's How to With John Wilson. (Amodio did, however, correctly name both A$AP Rocky and Blake Lively.)

Fans were excited about the action.

A fun moment away from the board came when Amodio explained how he had spent some of the $1.5 million he took home from the show.

"I'm a frugal man. I fixed the air conditioner in my 10-year-old car that's been broken for about nine of those years," Amodio told Jennings. "And I hired an accountant."

Jennings laughed. "Dare to dream, America," he said. "Anything can come true on this stage."

Jennings asked Buttrey in the same segment if he planned to split his earlier winnings on the show with Steve Martin, as the comedy icon had tweeted after Buttrey's victory. "We'll see after the big tournament," Buttrey answered from the stage.

Back in the TOC game, Buttrey really pulled ahead in Double Jeopardy!, thanks in part to a $6,000 win on a Daily Double in the category of "Scientific Trios." He ended that round with $6,200 more than Amodio and $10,400 more than Focht.

After all three correctly answered the Final Jeopardy! question in the category of "Geographic Pairs," Buttrey was the clear winner, with a haul of $33,601. Focht came in second, with $24,000, and Amodio ended up in third place, with a $16,800 total.

Friday's matchup will feature Eric Ahasic, Andrew He and Mattea Roach, the latter of whom walloped both Amodio and another record-breaking contestant, Amy Schneider, in an exhibition game they played on Tuesday.