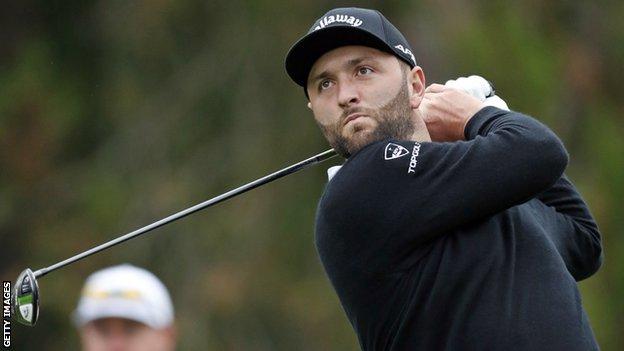 World number one Jon Rahm has said he is improving after struggling with a stomach ailment earlier this week.

The Spaniard is due to make his second Ryder Cup appearance for Europe against the United States at Whistling Straits in Wisconsin from 24-26 September.

He is playing in the PGA Tour's season-opener in California but missed the pro-am on Wednesday after feeling ill during a practice round on Tuesday.

Rahm said he had felt "way worse" than after testing positive for Covid-19.

"I'm just a little run down from the season," added the 26-year-old US Open champion who has tested positive for the virus twice in the past three months.

"I was having a hard time focusing given the fact that I haven't had a solid meal since Tuesday morning.

"Maybe having a little bit too much good rich food Monday and Tuesday just did it for my stomach.

"I heard there's a stomach virus going on, but I feel OK.

"I've dealt with worse. A lot of people have played with worse. Tiger Woods won a US Open with a broken knee, so I'm OK."

Rahm is set to be part of a European team hoping to retain the Ryder Cup after a resounding 17½-10½ triumph in Paris in 2018.

He shot a level-par 72 in round one of the Fortinet Championship, seven behind leader Chez Reavie.