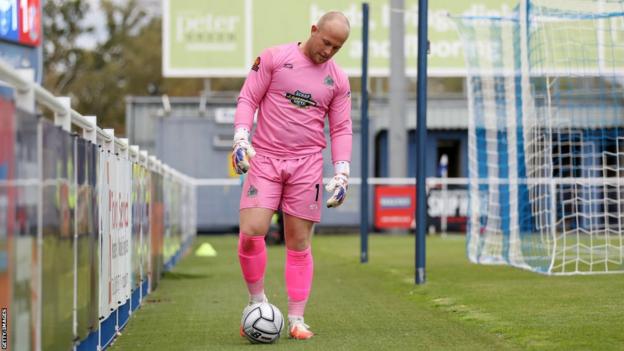 Thompson joined Warrington Town from Altrincham in the summer

A non-league goalkeeper says he was sent off for reacting to a fan who urinated in his water bottle during an FA Trophy tie.

Warrington Town keeper Tony Thompson, 28, says he squirted the away fan after drinking from the bottle.

It led to him receiving a red card an hour into his side's 1-0 defeat at home to Guiseley on Saturday.

"Today I fell out of love with the game!", the former Altrincham and Morecambe player later Tweeted.

"I've been called many names but for someone to [urinate] in my bottle, for me to drink it and then to be told I wasn't allowed to react because I'm a player is outrageous.

"That person has put me my family's health at risk and knocked me sick."

The incident led to a long stoppage as players confronted fans behind the goal at Warrington Town's Cantilever Park, before the referee gave Thompson his marching orders.

"I don't think I'll ever be involved in anything like that again," Warrington boss Mark Beesley told The Warrington Guardian.

"The Guiseley staff apologised - it was disgusting and there's no place in life for things like that," he added.

"If someone urinates in my bottle and I drink it, I'm going to throw it away. To send him off for throwing the bottle away is a disgrace.

"From our point of view, the welfare of our players is paramount and what Tony was subjected to was disgraceful."