Chushul, Ladakh – Nomads living for centuries in Ladakh say their lives and livelihoods are threatened by the continuing military tensions between India and China along their disputed border in the Himalayas.

“Since three generations, my family has been herding cattle in Demchok, but the conflict deprives us of our grazing rights,” Konchok Ishey, a 43-year-old nomad from the Chushul valley in eastern Ladakh, told Al Jazeera.

Tensions along the Line of Actual Control (LAC), as the de facto border between India and China is referred to, reached a peak two years ago when rare hand-to-hand combat in Ladakh’s Galwan valley resulted in the killing of 20 Indian and at least four Chinese soldiers.

Some media reports this year claimed the Chinese death toll in the June 15, 2020 incident – the worst military skirmish between the two nuclear powers in 45 years – was as high as 38, though China’s People’s Liberation Army (PLA) rejected the claim.

The Galwan combat led to an unprecedented military standoff between India and China, bringing the two Asian giants to the brink of another war.

Multiple rounds of talks between their armies since have failed to reduce the tensions, exacerbated by their buildup along the LAC and adding to the anxiety among nomadic residents in Chushul and other villages.

In January this year, New Delhi confirmed the construction of the first bridge over the lake in an area “under the illegal occupation by China for around 60 years now”.

The LAC passes through the landlocked 135km-long (84 miles), boomerang-shaped lake, which is 6km (3.7 miles) wide at its broadest point. One-third of the lake falls under Indian territory while the remaining is under Chinese control.

The western end of Pangong Tso lies 54km (33 miles) southeast of Leh, the main city in Ladakh. The second Chinese bridge being constructed over the lake is 25km (15 miles) east of the LAC. 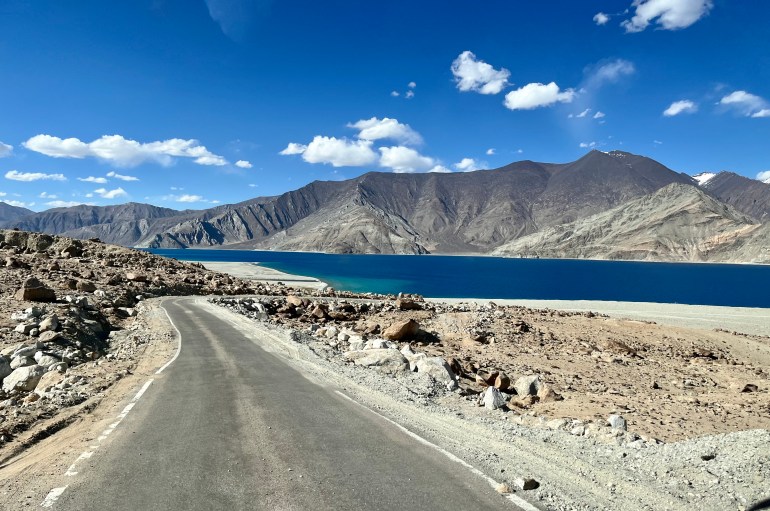 For Ishey, the second bridge and “other Chinese encroachments” into the 45km-long (28 miles) Skakjung pastureland in the Demchok-Koyul sector in Ladakh have snatched their sense of safety and rights over land owned by the nomads for generations.

Nomadic tribes such as the Changpas living in the sector’s villages – Dumchele, Demchok, Chumur, Tsaga La, Koyul and Loma – say they are losing access to grazing lands, which are already shrinking since the conflict intensified in 2020.

Two years later, the people in Chushul say they are at risk of dying, either in a war or by starvation.

“Before the clash happened, we travelled beyond Gurung Hill (a mountain near LAC) and spent days there to herd the cattle. But the Indian soldiers now forbid us from grazing our cattle even in the land under the Indian control,” Namgyal Phuntsog, 49, who belongs to the Changpa tribe, told Al Jazeera.

“And when we ask for our grazing rights on those lands, they accuse us of being traitors. In such a situation, it is very difficult to survive.”

The lack of access to grazing lands has forced many nomads to sell their cattle. Phuntsog said he has sold almost 100 sheep in two years and is barely able to feed the rest.

“Today, we cannot go up to our pasturelands in Dumchele. In the past, we travelled beyond the disputed Demchok sector for cattle grazing. As of today, China deprives us of access to grazing land in Dumchele and areas such as Kigunaru, which are now under Chinese control.”

Sonam Paljor, another Changpa nomad in Chushul, said for the last three years, he has been returning from Dumchele without being able to feed his cattle.

“Neither our lives nor our livelihoods are safe. Cattle herders are selling their livestock and leaving Chushul. If our interests are not protected, mass migration might empty this village, indirectly helping the Chinese,” he told Al Jazeera. 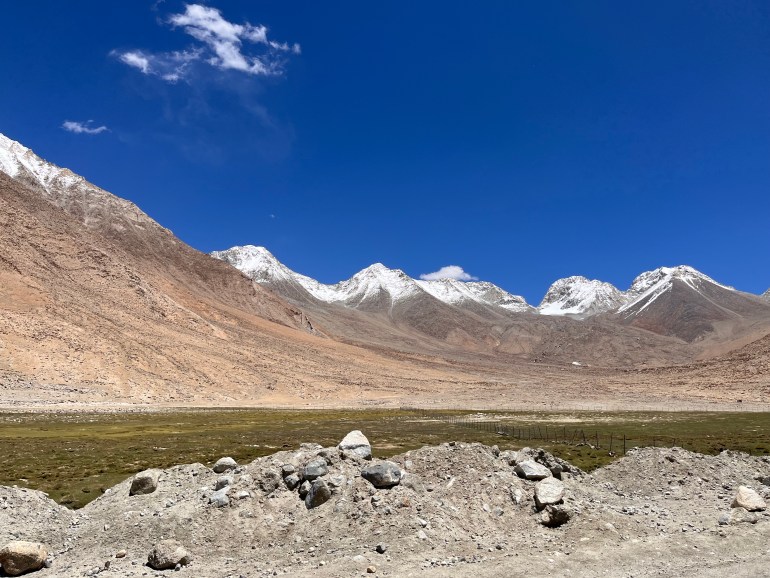 Chushul sits at about 15,000 feet (4,572 metres) above sea level, amid snow-covered mountains and rugged paths barely qualifying as roads. A brown-coloured village, it houses more than 1,100 residents.

In December 2019, months before Indian and Chinese forces accused each other of incursion into their territory leading to the deadly Galwan valley combat, Ishey recalled an incident when some Chinese civilians and PLA soldiers intercepted him and other herders when they were on their way to the grazing lands in Dumchele.

The Chinese asked them to return to Chushul and Tsaga La, which they say became the trigger for the tensions that began in April next year.

“It began in 2019 December itself – the army, the locals, the nomads, everyone knew it was going to grow as a conflict,” said Paljor.

Ishey said even after the India-China War of 1962, herders were allowed to move beyond Rezang La towards Mukhpari and Khaplang, despite these areas being near Spanggur post, a mountain pass on the LAC.

“We are told that those grazing lands are under the Chinese control now. But they are not Chinese areas, they are the areas of my ancestors,” he said.

‘Why should we leave?’

Ishey’s father, Konchok Stanzin, is 76 and has lived through all four wars India has fought since its independence in 1947 – three with Pakistan and one with China.

Since the Galwan clash, Stanzin feels the Ladakh “of his ancestors is shrinking rapidly” and wants it to “regain the shape it has lost to China”.

Phuntsog adds to Stanzin’s longing for the land they say is being lost.

“We are being pushed away from the areas under Indian control, but the army should realise it is us the Chinese fear, it is us who alert the army about the Chinese movement. Asking us to retreat would only benefit the Chinese,” he told Al Jazeera.

“This is not just land for us, it is a question of our identity, culture, heritage and livelihood. Why are our rights not important to the government?”

If our interests are not protected, mass migration might empty this village, indirectly helping the Chinese.

The locals also say the People’s Liberation Army is settling Chinese civilians in areas “snatched from India” and constructing military and other facilities. The nomads also point towards an absence of bunkers in places like Chushul and how it endangers their wellbeing in case of an armed conflict.

Since the June 2020 clash, India and China have held talks through diplomatic and military networks. But even after 15 rounds of talks aimed at a mutually agreeable middle ground for disengagement of forces at several points along the LAC, no breakthrough has been reached.

Tashi Tsephel, a retired Indian army officer and recipient of a bravery award, had served in Chushul, Demchok and the Galwan valley. He told Al Jazeera that in the past, the Chinese maintained minimal presence around Galwan. But it changed in 2019, he says, when the PLA’s presence in the area “increased aggressively”.

“Over the years, Ladakhi nomads alerted the Indian army whenever they sensed the PLA’s movement. Sending nomads is a good strategy since it helps us to square the upper reaches. This is exactly what the PLA is doing. It is establishing dominance by installing nomads in the disputed areas.”

Tsephel says the developments could be “damaging for India”.

“As of now the PLA is installing nomads, tomorrow it could very well establish army bases there,” he said, adding that Ladakhi nomads, who are aware of the expanse of the grazing areas in the frontier region, should be allowed to herd their cattle.

“This could help India in acquiring a stronghold in the disputed areas,” he said.

Despite their loyalty towards India, the nomads say the Indian army is not providing them with access to their own land. As they watch the PLA “inch into the Indian territory”, they say they are pained by the Indian government’s “inaction” in the face of the Chinese “land grab”.

Amid uncertainty over their future, the nomads ask: “This is our land. Why should we leave?”