Beirut, Lebanon – Sali Hafiz has not seen her friend for a few days, not since Sali entered a bank with a replica gun in Beirut on September 14 demanding her own money, and instantly became famous across Lebanon, with her defiant image broadcast around the world.

The friend, who did not wish to be identified for security reasons, has brought a cake to Sali, who, while she was not arrested, is now in hiding.

Sali’s sister Ekraam, who also held up the bank and is also in hiding, cuts the cake into slices and shares them around the room.

“I’ve lost five kilograms already”, Sali told Al Jazeera, one hand holding a plate with cake, the other holding her jeans away from her waist, showing how loose they have become. “It’s stress.”

Sali, 28, and her sister took a branch of Lebanon’s Blom bank by storm on September 14, armed with what she later said was a replica gun, demanding to take $20,000 in cash out of their own accounts.

Sali said that she did it to pay for her sister’s medical expenses and immediately became a symbol of the suffering and desperation many Lebanese are living under amid the country’s deep financial crisis.

Since 2019, banks have imposed severe restrictions on foreign currency withdrawals, forcing most withdrawals to be taken out in local currency, and at a rate much lower than market value. Effectively this means that, if people want to access their foreign currency accounts, they will lose a considerable amount of money every time they withdraw.

While she was not the first person to forcefully seize their money from the banks this year, Sali’s success opened up the floodgates, with at least five other depositors carrying out similar actions on September 16.

With authorities scrambling to react, and officials urging people to not copy the heists, the banks then announced that they would close for three days this week, with a plan to reportedly open on Thursday. 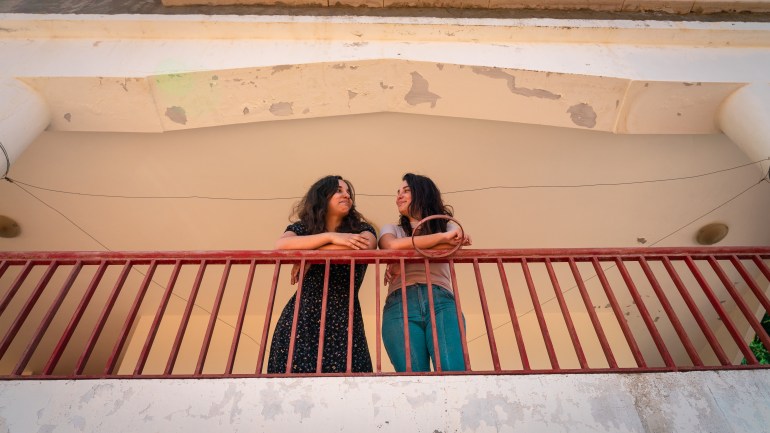 Sali, right, and Ekraam entered the BLOM bank branch in Beirut to demand money from their accounts so that they could pay for their younger sister Nanci’s cancer treatment [Mia Alberti/Al Jazeera]

Like many middle-class Lebanese families, the Hafiz family lived comfortably before the country’s economic crisis.

When the financial collapse began, they could still get by, living from their savings and work.

But that changed when Sali’s younger sister, 22-year-old Nanci, was diagnosed with brain cancer seven months ago, and the family began selling their belongings after the bank denied their request to withdraw money to pay for Nanci’s $20,000 surgery.

“We are not criminals, we have the money, but [the banks] are stealing it,” Sali said.

With more money needed for Nanci’s treatment in Istanbul, and the bank once again denying a withdrawal request, Nanci asked Sali to take care of her children if she died.

“I said ‘I’m ready to die for you to get better and I promise you I’ll get you the money,’” Sali told Al  Jazeera.

The next day Sali entered the bank with the gun.

Sali and Ekraam still beam when they share details of the hold-up.

They left the bank with more than $13,000 and an official bank receipt.

Police quickly surrounded their house but left when Sali posted on Facebook that she was at the airport heading to Istanbul.

She said she then left Beirut, disguised as a pregnant woman.

Ibrahim Abdallah was among the crowds cheering for Sali from outside the bank on September 14.

“We are not robbing, for us, we call it liberating our deposits because the banks are robbing us, they are robbing all of the Lebanese”, Abdallah told Al Jazeera.

Abdallah is a member of the Depositors Outcry Association, a group of activists protesting for the right to access their money, and which has helped organise some of the bank hold-ups. 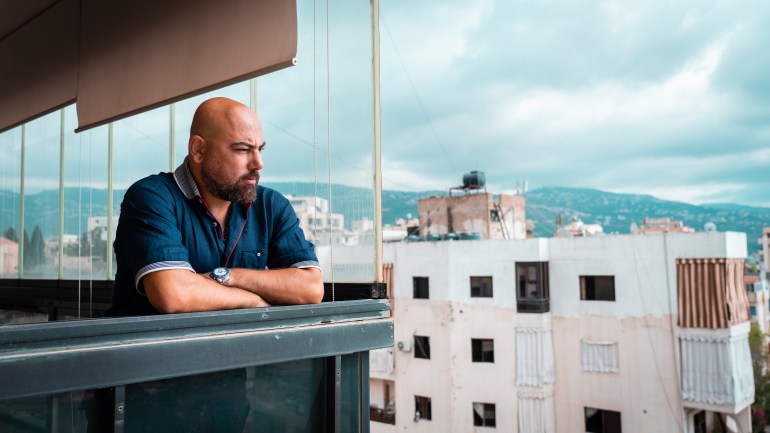 Abdallah said he has millions of dollars trapped in his account – savings from 17 years working as a senior sales manager in one of Dubai’s top companies.

He showed Al Jazeera pictures from his former life, posing with top government officials from Saudi Arabia, lavish houses and galas, and selfies with celebrities like Ivanka Trump.

Now, he lives on the $400 a month the bank allows him to withdraw, which he uses to support his two children and elderly parents.

Lebanese financial institutions have said the restrictions are necessary as they simply do not have enough foreign currency to give account holders.

Abdallah confessed that he has also thought of holding up a bank, but that he decided not to carry it out as it was too risky.

His bank could close his account, as they have previously threatened to do, leaving him with a cheque worth millions, but that no other bank would be willing to cash, due to the same liquidity issues that keep accounts frozen.

“I’m ready if any country will take me, to leave Lebanon forever. I prefer to be a refugee in any other country. It’s better than being a refugee in my own country,” Abdallah told Al Jazeera.

Sali and her sister have taken refuge outside of Beirut, and are waiting for the authorities’ decision on Sali’s case before they can return.

They spend the day resting and picking apples from a nearby orchard.

Sali is worried about Nanci, who has not been able to start her treatment, as she is waiting for her passport to be renewed.

But she has no regrets.

All the women around the world are proud of you Salii👑 #sali_hafiz pic.twitter.com/a1XtQMbPaN

“If I went back in time I’d do it again,” Sali said. “I had four options: commit suicide, work in a [morally] wrong way to get money, see my sister dying or go inside the bank. I decided to use the last solution,” she said.

Sali has seen the cartoons depicting her as a hero. One, shared many times on social media, shows her dressed as a Lebanese wonder woman, holding a sack with banknotes in one hand, while holding her sister – dressed in a hospital gown and head shaven – in the other.