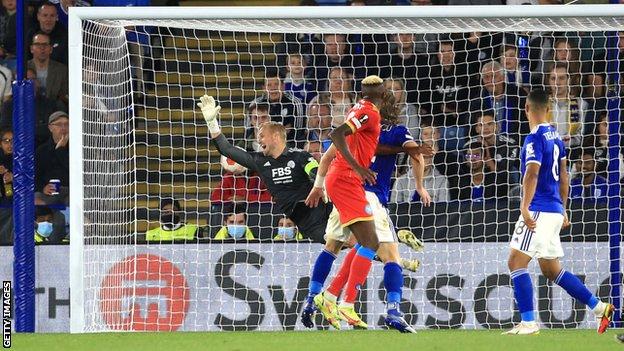 Leicester were denied victory in their Europa League opener at King Power Stadium after Napoli's Victor Osimhen scored twice in the second half.

Osimhen reduced Leicester's 2-0 lead after 69 minutes with an exquisite touch past Kasper Schmeichel, before his header made it 2-2 late on.

Ayoze Perez had scored a first-half volley and Harvey Barnes doubled Leicester's lead after the break.

Leicester summer signing Patson Daka also had a goal ruled out for offside.

The two sides, widely tipped as being among the favourites to win the competition, delivered an entertaining encounter in front of a vocal crowd at the King Power.

Leicester goalkeeper Schmeichel was called into action on several occasions, while Barnes proved a constant threat at the other end.

The hosts looked set to take pole position in Group C too, but Osimhen dealt a late blow before Leicester's Wilfred Ndidi was sent off for a second booking.

It leaves the group wide open with Leicester still to travel to Italy, as well as facing Spartak Moscow and Legia Warsaw.

Leicester clawed back in enthralling battle 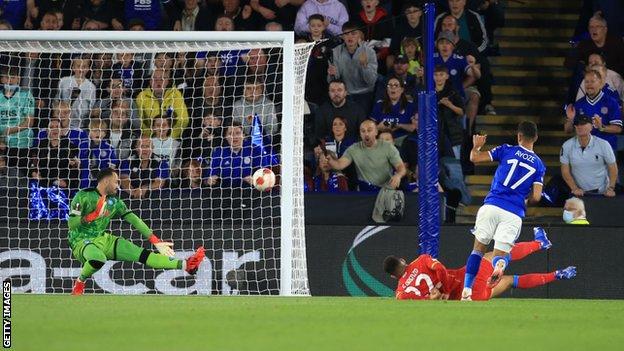 There was a carnival atmosphere at the King Power to welcome European football back to Leicester and the match did not disappoint.

Napoli set the tone with their first shot on target after only three minutes and Leicester responded when Barnes was denied from close range, before setting up Perez's volley with a perfectly-weighted cross.

Timothy Castagne, along with the help of Schmeichel, somehow kept out Napoli's Piotr Zielinski, while Lorenzo Insigne and Hirving Lozano came close.

The Italians had been wasteful and when Barnes coolly thumped in Leicester's second, they looked set to come out on top.

But a sublime one-touch passing move saw Osimhen dance into the box before he flicked the ball past Jannik Vestergaard and over Schmeichel.

And the Napoli forward then hung well in the air to nod in a second and complete the comeback.

Amir Rrahmani (Napoli) is shown the yellow card for a bad foul.

James Maddison (Leicester City) wins a free kick in the attacking half.

Ademola Lookman (Leicester City) wins a free kick in the defensive half.

Adam Ounas (Napoli) wins a free kick in the attacking half.

Attempt missed. Amir Rrahmani (Napoli) header from the centre of the box is too high. Assisted by Matteo Politano with a cross following a set piece situation.

Adam Ounas (Napoli) wins a free kick in the attacking half.

Goal! Leicester City 2, Napoli 2. Victor Osimhen (Napoli) header from the centre of the box to the top left corner. Assisted by Matteo Politano with a cross.

David Ospina (Napoli) wins a free kick in the defensive half.