Klopp was angry after Jordan Henderson's late goal was ruled out for offside against Sadio Mane.

He also questioned how Everton goalkeeper Jordan Pickford had not been dismissed for a challenge that injured Virgil van Dijk early on.

"The picture I saw was not offside, but it was because somebody decided it," said Klopp.

The lunge ended Van Dijk's afternoon and could see him set for a spell on the sidelines with the centre-back taken to hospital for a scan on a knee injury.

Pickford escaped punishment as Van Dijk was offside in the build-up, although it is understood VAR official David Coote subsequently did not check for a potential red card, despite having the power to do so.

Liverpool have called into question the failure to scrutinise Pickford's challenge on Van Dijk and take appropriate action, and have also asked for clarity on which part of Mane's body was deemed to be offside.

Richarlison was also dismissed late on for Everton in a dramatic finish at Goodison Park, with Klopp fearing Liverpool midfielder Thiago Alcantara may have been injured in the challenge.

Mane had put the visitors ahead in the third minute, with the hosts levelling for the first time when Michael Keane headed in a corner.

Everton came from behind again to remain top of the Premier League, in-form striker Dominic Calvert-Lewin heading in an 81st-minute equaliser after Mohamed Salah had put Liverpool 2-1 up.

'Everton lucky but show grit in derby of chaos and controversy'

Should Pickford have been sent off? 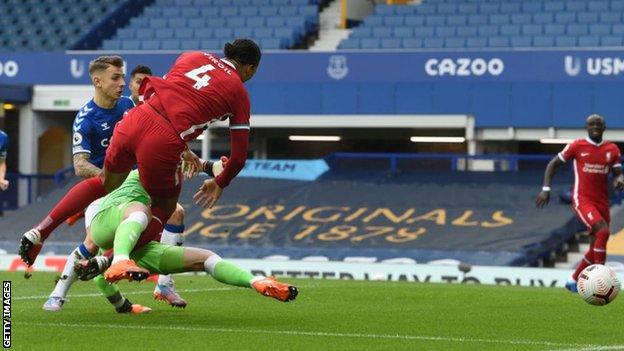 Virgil van Dijk was injured in a challenge by Jordan Pickford

Liverpool were leading 1-0 when Everton goalkeeper Pickford injured Van Dijk in a challenge that led to the Liverpool defender being substituted.

VAR watched the incident back to look for an offside, and once the decision was given did not check for a possible red card.

The rules suggest Pickford could have been sent off for serious foul play, though this is a subjective call, and had they felt he was making a genuine attempt to play the ball it would not have been possible to award a red card.

"We lost one player in a situation where VAR was not involved with Virgil and maybe another one in the red-card situation and scored a legitimate goal, which didn't count," Klopp said.

What the pundits said...

Former England defender Alex Scott on Final Score: "Jordan Pickford's challenge on Virgil van Dijk should absolutely have been a red card. It was reckless, the sort of challenge that could end a player's career. He has to be sent off. It was rash - the prime example of what everyone has been saying about Pickford."

Former England goalkeeper Rob Green on Radio 5 Live: "Jordan Pickford was out of control and he tried to do the Peter Schmeichel 'starfish' jump. He has wrapped his legs around Virgil van Dijk and it looks really bad. His eyes are only on the ball but it looks worse rather than any intent on causing harm to Van Dijk."

Ex-Premier League striker Jermaine Beckford on Final Score: "The way Jordan Pickford came out to address Virgil van Dijk and try to tackle him and win the ball off him was really, really dangerous. Both his legs were quite high. He was very fortunate not to be sent off."

Former Premier League referee Peter Walton told BT Sport: "Players don't get a free shot because the whistle has gone. Jordan Pickford's challenge should have been addressed by VAR and given Michael Oliver a second look at it."

Carl, Derby: "The mind boggles how that was not a red for Pickford. You can endanger a player but it's OK if their eyelash is offside... VAR a joke (and not a funny one)!"

Dave: "Utterly absurd. Pickford knew exactly what he was doing - red card any day of the week. You don't have to be a ref to acknowledge seriously foul play. A dreadful unprofessional foul from a decidedly average keeper.

Should Mane have been ruled offside?

Liverpool captain Henderson thought he had won the game for the visitors, only for Mane to be ruled offside in the build-up.

It was a tight decision, but not dissimilar to ones we have previously seen in the Premier League that are impossible to call with the naked eye.

"It must be offside with VAR, it's what everyone wants," Henderson told BT Sport. "I think they bend the lines sometimes to make it offside. I'm not sure how they do it, I've seen it before."

Klopp added: "Coming into the dressing room, people are standing around with a laptop and I say 'What's wrong?' and they say 'We have watched it back and we don't understand why it is offside'.

"I am a real supporter of VAR - the picture I saw there is no offside, since then I have had 10 interviews and everyone tells me it was not offside and that doesn't lift my mood.

"I didn't see offside but maybe somebody will explain it to me."

Dean, Northampton: "So VAR can see that Mane's arm hair is offside but it can't see that reckless tackle by Pickford?"

Huw, Cardiff: "That offside freeze-frame isn't even the moment it left Thiago's foot! If the technology cannot be that accurate then you need a margin of 'too close to call'. See cricket."

Ciaran: "It's not VAR technology itself that's so frustrating, it's the utter inconsistency in how it's used that's ruining football. The standard of refereeing in this country needs a complete overhaul."

The Trump Show: Behind the scenes of his presidencyThe Young Offenders: All episodes are streaming now

Jason Bell and Osi Umenyiora: Is the NFL ready for its first gay active player?