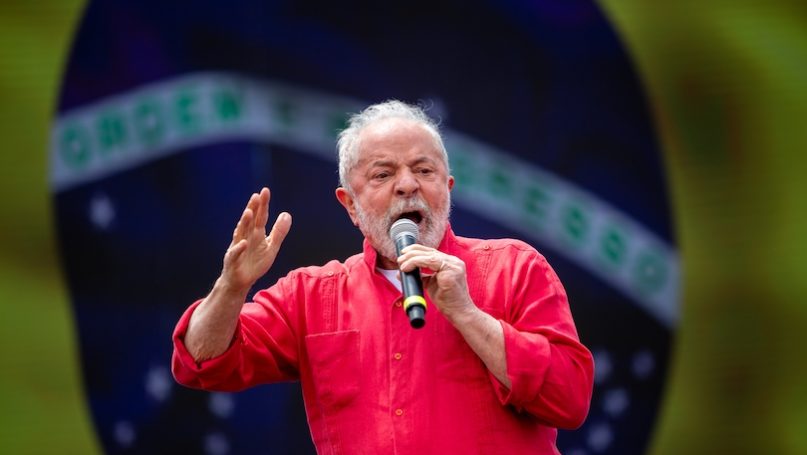 A well-known labor activist and progressive, Lula defied expectations when he first assumed office in 2002. Where other leftist leaders like Venezuela’s Hugo Chávez promoted skepticism of existing international power structures and denounced the injustices of global capitalism, Lula adopted a path closer to the “third way” approach of US president Bill Clinton and UK prime minister Tony Blair. At home, as a central figure of Brazil’s Workers Party, Lula pushed direct support programs for the poor, but he also insisted that Brazil could only succeed if its economy thrived under the same capitalist growth models that had transformed the wealthy world. Abroad, Lula was equally—if not more—ambitious. He seized upon the notion that “BRIC” (Brazil, Russia, India, China) countries represented the century’s emerging economic and political growth potential. Over the next two presidential terms, he traveled widely, inserted Brazil into high-profile diplomatic issues (most notably in the Middle East), pushed Brazil’s role advocating for poor people across the Global South, paired respect for state sovereignty with support for democracy, and sought to build Brazilian military capacity in order to press his case for UN Security Council reform. He criticized US hegemonic behavior but also actively engaged classic postwar organizations like the World Trade Organization.

Liberal internationalism with Latin American sensibilities, these ambitions reached perhaps inevitable limits. Other South American states bridled at the Brazilian government’s apparent “first among equals” approach. Nominal partners like China and India only occasionally found common cause with Brasília’s agenda. Brazil’s own economy could only support a certain amount of global outreach to the poor and could only sustain a limited geostrategic capability. At home, Lula had broken with traditional Workers Party foreign policy priorities and never fully converted party members to his approach. Then, over the next two administrations, scandal engulfed the party and, in a stunning turn, Lula himself ended up imprisoned for a time.

With Brazil’s political left staggering, Bolsonaro emerged as a stark alternative. Taking office in 2019, the retired military officer and former member of the Chamber of Deputies embraced his reputation as “Trump of the tropics.” He framed his political opposition as socialists who menaced Brazil’s traditional values, elevated support for Israel in line with his Evangelical Christian supporters, emphasized national sovereignty, and discouraged engagement with international organizations in favor of bilateral relationships, particularly with right-leaning leaders.

Where Donald Trump in the United States remained hazy about threats from a “globalist” agenda, Bolsonaro and his inner circle identified with traditional nationalist ideas of defending “Western civilization.” In practice, though, Bolsonaro remained inward-focused. He traveled less than Lula and saw the military as an important domestic constituency rather than a tool for international projection. He saw the Amazon as a national resource and relations with wealthy European states like Germany suffered to the point of withdrawing ecological aid when Bolsonaro loudly rejected any international criticism of Brazilian environmental policy. Still, Bolsonaro’s nationalism did reach certain limits. For instance, as a candidate, he claimed that China was buying Brazil’s sovereignty, but he ultimately embraced Chinese trade and economic openness as necessary for Brazil’s prosperity.

Lula’s internationalism and Bolsonaro’s nationalism seem to represent ideological whiplash. In reality, foreign policy change is more constrained between administrations than we might imagine. My own research on the United States and (with co-author Mariana Negreiros Mariano) Brazil finds that dramatically different leaders may indeed seek to charge forward in new directions, typically in direct opposition to their predecessors, but their efforts are often stymied. Existing security commitments, economic interests, ideological expectations, political culture, and so forth make practical, revolutionary change difficult to achieve. Further, governments tend to build reputations and track records, and their professional diplomatic corps tend to remain more stable than their political leaderships. Those facts may smooth the tendency for leadership change to precede grand strategic revolutions.

Moving forward, Lula no doubt will—and has already—flipped the nationalist script back toward his old internationalism. Two weeks after the election, he was already attending the COP 27 UN climate summit in Egypt, reprising his prior diplomatic ambitions, and reiterating his declaration that “Brazil is back.” Still, we are likely to see a more restrained, if still confident, internationalism. Most obviously, though Lula effectively raised Brazil’s global profile during his first two terms, many of his grandest ambitions sputtered during his first round as president. Today, where he is again likely to emphasize democracy and development in the global south alongside liberal economic growth policies and high-level diplomacy, he may spend less energy on revolutionary updates, such as Security Council reform, to the global power structure.

Revealingly, in May 2022, Lula said that in the Russia-Ukraine war, both states’ leaders, along with US president Joe Biden, equally bore responsibility. That interpretation fits a more traditionally leftist read of geopolitics in which those dominating global power always remain suspect. It also allows, in this case, Lula and Brazil to avoid taking sides, an approach nominally but not practically different from Bolsonaro’s nationalism. Unfortunately for Lula, both that war and rising tension between the United States and China will confront future Brazilian presidents with uncomfortable, often zero-sum choices between competing claims upon 21st century world order. This is not an impossible path for Lula’s foreign policy, but it will require a dynamic update from twenty years ago.

Lula channels many Brazilians’ desire for a more expansive role in the world. Bolsonaro, by contrast, underscored how domestic constraints and fraught politics have tended to pull the country’s gaze inward. In his first rounds as president, Lula may have learned how to navigate that tension. In the coming year, we will know if he has in fact drawn those lessons based on whether and how he preserves his distinctive internationalism but moderates his ambitions.

Dr Jacob Shively is an associate professor in the Reubin O’D. Askew Department of Government at the University of West Florida, where he teaches a wide range of international relations courses. His scholarship includes books, articles, and commentaries on foreign policy, national security, and grand strategy. He is the author of Make America First Again: Grand Strategy Analysis and the Trump Administration (Cambria 2020).