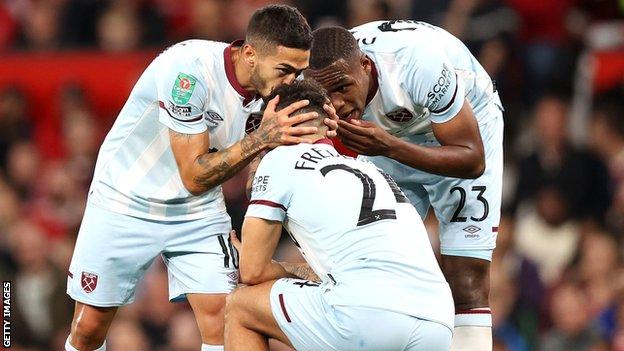 West Ham gained revenge for Sunday's Premier League defeat against Manchester United by knocking their hosts out of the Carabao Cup at Old Trafford.

Manuel Lanzini's ninth-minute effort, his first goal in almost 12 months and only his second since May 2019, proved enough to take David Moyes' men into the last 16.

Not even the second-half introductions of Bruno Fernandes and Mason Greenwood could swing the game United's way in a performance that exposed Ole Gunnar Solskjaer's pre-match chat about the strength of his squad as somewhat hollow.

Lanzini's goal was just reward for West Ham's flying start. Ryan Fredericks eased between Jadon Sancho and Alex Telles before cutting a low cross back to the Argentine, who finished into the bottom corner.

Three times in the final five minutes the visitors should have wrapped up victory, but Andriy Yarmolenko, Mark Noble and Jarrod Bowen all failed to hit the target. In the end though, it didn't matter.

It was the first Old Trafford triumph for the Hammers since Carlos Tevez's matchwinner in 2007 kept them in the Premier League - and their first in a cup competition since Paolo di Canio scored the only goal in an FA Cup meeting in 2001.

For United and Solskjaer it is an early end to their hopes of securing the first available silverware of the season, and ending the wait for a trophy that stretches back to 2017.

Defeat came despite picking a completely different United side - all full internationals - to the one that was on duty at the London Stadium. Solskjaer now has tough decisions to make about some of his fringe players, who will now have even fewer opportunities to play.

Anthony Martial was a peripheral figure in attack, Juan Mata was replaced by Fernandes in the second-half, while Lingard, who, like Mata has a contract that expires in the summer, failed to have a notable impact.

In addition, Dean Henderson didn't do much on his first appearance of the season to suggest he is a threat in goal to David de Gea.

The doubts over Solskjaer will surface again too after last week's Champions League defeat at Young Boys.

Not that any of this will bother Moyes and his West Ham team, who kept their hosts at bay in relative comfort. Mata did clip the bar from an acute angle and debutant keeper Alphonse Areola made a good save to deny Greenwood.

West Ham coach Stuart Pearce: "Delighted with the result. It is a really tough place to come. We started the game very well. Could have won by two goals to make the evening a bit easier.

"We were disappointed not to get something at the weekend. United are an outstanding team with a lot of talent. We are aspiring to challenge Man Utd.

"Credit to David [Moyes]. This is the first time he has beaten them since he left. He has been around for nearly 1,000 games, seen it all, done it all. He will take it in his stride. Not get washed away."

Attempt saved. Jarrod Bowen (West Ham United) right footed shot from the right side of the box is saved in the bottom right corner. Assisted by Nikola Vlasic.

Andriy Yarmolenko (West Ham United) hits the left post with a left footed shot from the centre of the box. Assisted by Mark Noble with a through ball.

Attempt missed. Bruno Fernandes (Manchester United) left footed shot from outside the box is high and wide to the left. Assisted by Nemanja Matic.

Anthony Elanga (Manchester United) wins a free kick in the defensive half.

Attempt saved. Anthony Martial (Manchester United) left footed shot from the left side of the six yard box is saved in the centre of the goal.

Attempt blocked. Jadon Sancho (Manchester United) right footed shot from the left side of the box is blocked. Assisted by Anthony Elanga.