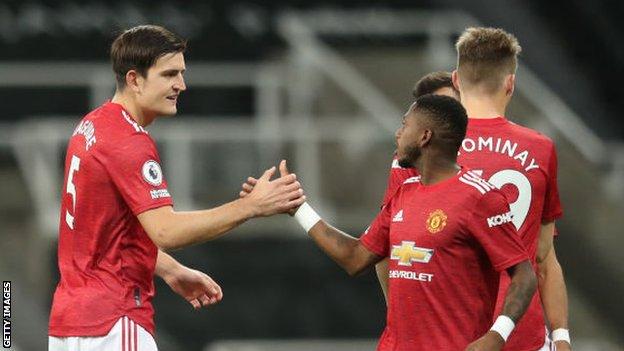 Maguire equalised in the 23d minute with a header

Maguire cancelled out a Luke Shaw own goal before late strikes from Bruno Fernandes, Aaron Wan-Bissaka and Marcus Rashford sealed a 4-1 win.

It was the ideal response after losing two of their first three league games, including a 6-1 defeat at Tottenham.

"The season started for us today," said Solskjaer.

"We have come up to the speed of the game and that showed." 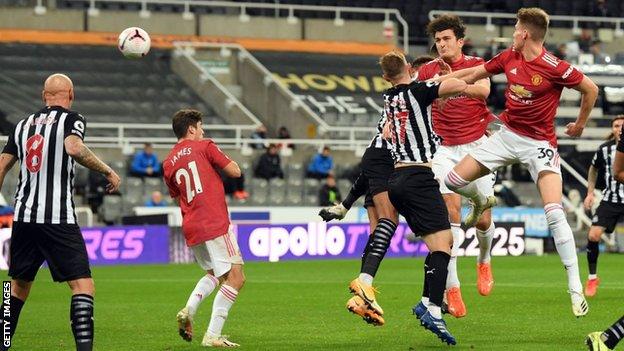 Maguire's goal was his second for Manchester United

Maguire has struggled for form following his recent arrest in Greece and endured a particularly bad time on international duty last week, sent off after just 31 error-strewn minutes in the 1-0 defeat by Denmark.

There had been some suggestions he should be taken out of the line of fire at club level given his recent poor form, but Solskjaer stood by his captain by naming him in the first XI on Saturday.

Maguire responded by scoring the equalising goal and putting in a strong, all-round defensive display.

"He showed good character, I am happy for him. He had a couple of difficult weeks since he last played for us.

"This was a great result and great character to come back, led by a very inspirational captain."

'Congratulations for being the first to save my penalty' 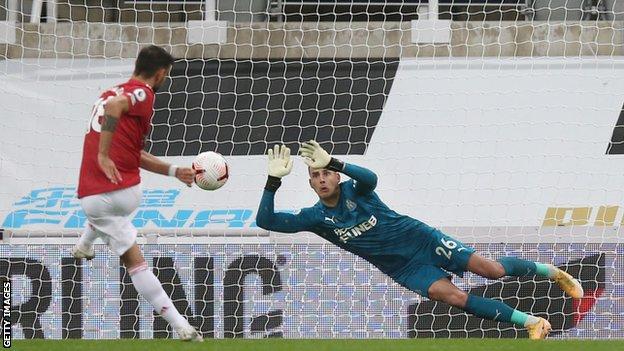 Fernandes' penalty was the first saved by a Premier League goalkeeper, at the 11th attempt

Fernandes' goal came after he had missed an earlier penalty - his first miss from the spot as a Manchester United player.

His 10 previous successful kicks had seen him utilise his unique jumping technique, but he decided not to use it on this occasion and Newcastle goalkeeper Karl Darlow saved his spot kick.

"Congratulations to him to be first to save a penalty in the Premier League from me," said Fernandes after the game.

"That's 11 taken and one missed. Now people can say I can miss a penalty."

Fernandes has now been directly involved in 20 goals in his 18 Premier League appearances for United - 11 goals and nine assists - and has scored in each of his last three games.

United have six points from four games and Fernandes believes he and his team-mates have shown the right response after a slow start to the season.

"It's always important to win," he said. "To have criticism is normal in football.

"This is a big club, we have big pressure, but we are big players. We are OK for that - the team is together. Today is the right way to reply to the 6-1 against Tottenham."

Jason Bell and Osi Umenyiora: Is the NFL ready for its first gay active player?