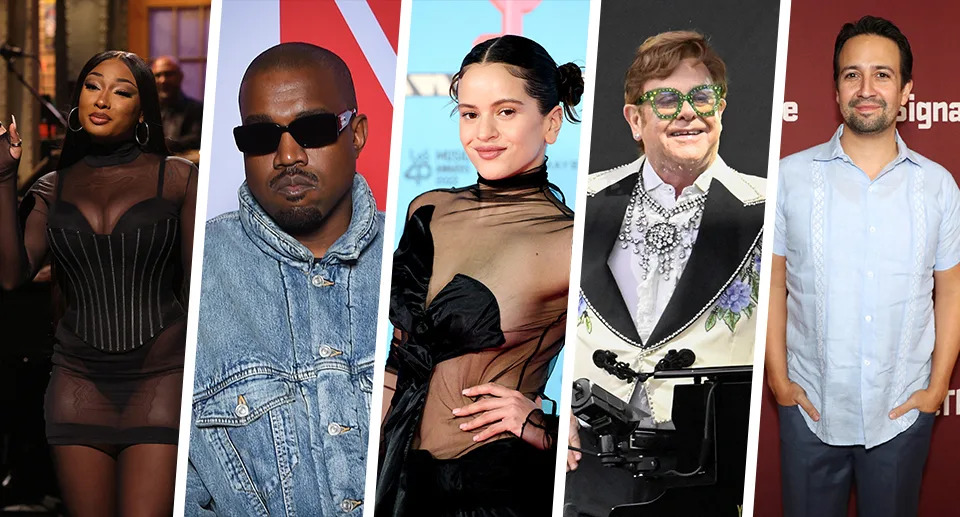 The latter two are especially significant. Beyoncé, who leads this year’s nominees with nine for Renaissance, now has 88 total nominations to her credit, which puts her in a tie with her husband, Jay-Z, for the most noms of all time. Additionally, the Album of the Year nod for Bad Bunny’s Un Verano Sin Ti marks the first time that a Latin music album has ever been nominated in that “Big Four” category.

That being said, there were still many head-scratchers and jaw-droppers among the awards’ whopping 89 categories, which will be presented Feb. 5, 2023 at the Crypto.com Arena in Los Angeles. Below are the biggest snubs and surprises.

This one really isn’t a “Snub,” although it may seem like one. The smooth soul superduo of Bruno Mars and Anderson .Paak was the big winner at the most recent Grammys ceremony, with their hit “Leave the Door Open” winning four awards, including Record and Song of the Year. This year, their album An Evening with Silk Sonic, which was released during the eligibility window of Oct. 1, 2021 to Sept, 30, 2022, received no nominations — but this is because Silk Sonic did not submit the album for consideration at the 2023 Grammys. As a result, An Evening with Silk Sonic is only recognized this year with a nod to Dernst "D'mile" Emile II, who’s up for Producer of the Year, Non-Classical. “We truly put our all on this record, but Silk Sonic would like to gracefully, humbly, and, most importantly, sexually, bow out of submitting our album this year,” Mars explained to Rolling Stone earlier this year. “We hope we can celebrate with everyone on a great year of music and partake in the party. Thank you for letting Silk Sonic thrive.”

SNUB: Get Back gets nothing

This “Snub” is also due to a procedural technicality. Peter Jackson’s Get Back was the major music movie event of the past year, yet the Beatles’ Disney+ docuseries isn’t up for Best Music Film. But there’s a reason for that. While Get Back was in fact submitted, it was deemed ineligible by the Recording Academy, due to a general rule that nominees’ material must have been recorded within the past five years (with the exception of the Historical category). Archival footage can be included in nominated music films, but can’t comprise the entire project — so if Get Back had featured some newly shot interview or commentary footage, it would have qualified. Jackson and the Beatles will just have to settle for the five Emmys, two Critics’ Choice Awards, and six other major accolades that Get Back has already won.

Rosalía made history at the 2020 Grammy Awards as the first Spanish-language artist to be nominated for Best New Artist. This year, her adventurous third album, Motomami, earned the best reviews of her career; is up for eight nominations at this week’s Latin Grammys; and is likely to land on dozens of critics’ year-end best-of lists. But Rosalía will have to settle for another nod in the Grammys’ Best Latin Rock or Alternative Album category (which her sophomore album, El Mal Querer, won in 2020) — because Motomami was shockingly shut out in the major races for Album, Record, and Song of the Year.

The fact that ABBA, one of the biggest and most beloved pop groups of all time, had never even been nominated at the Grammys up until last year — when “I Still Have Faith In You,” the Swedes’ first single in four decades, was up for Record of the Year — was undoubtedly one of the awards’ all-time most egregious snubs. But apparently the Academy is trying to make up for lost time with four ABBA nominations this year. The reunited group’s comeback LP, Voyage, is up for Album of the Year and Best Pop Vocal Album, while another Voyage track, “Don’t Let Me Down,” is up for Record of the Year as well as Best Pop Duo/Group Performance. It’s unlikely that ABBA will be the winner that takes it all in the Big Four categories, but at least they’re finally getting their due.

SURPRISE: Taylor Swift’s Song of the Year nominee is all too familiar

It’s no surprise that Swift was nominated — after all, she’s a Grammy darling with 11 wins, including three for Album of the Year. But this year, she’s up for a “Taylor’s Version” re-recording of a decade-oldsong, “All Too Well.”

All that being said, Swift was expected to get an Album of the Year nomination for the re-recorded “Taylor’s Version” of Red, which features the new “All Too Well,” but that was not the case. (Interestingly, the original Red was up Album of the Year at the 2014 Grammys ceremony.) Swift’s fans are not happy with this perceived snub, but the singer-songwriter will surely get another Album nod next year, when her just-released Midnightswill be eligible.

In the past, Kanye West — now known as Ye — has won 24 Grammys and received a stunning 70 nominations. He was eligible this year for his Andre 3000 collaboration “Life of the Party” and several tracks from Donda 2, but it seems the Academy has finally, understandably grown tired of his scandalous antics. Thankfully, this means we won’t have to worry about Ye hopping onstage and interrupting any winners’ acceptance speeches at next February’s ceremony.

SNUB: Morgan Wallen is too dangerous for the Grammys

Another controversial artist, Wallen, released one of the biggest releases of 2021, Dangerous: The Double Album, which debuted at No. 1 on the Billboard 200 and went multi-platinum. But that year was also plagued by scandal, when the country star was caught on camera using a racial slur. While the fallout didn’t hurt his record sales, it hurt his Grammy chances, when he didn’t earn a single nod last year — not even in the Country categories. That pattern continues this year, with Wallen’s eligible hits, “Wasted on You” and the Ernest collaboration “Flower Shops,” also receiving no nods.

SURPRISE: But three other polarizing artists get un-canceled

“Cancel culture” may have doomed Morgan Wallen, but the Recording Academy didn’t cancel three other embattled artists. Louis CK and Dave Chappelle received nominations in the Best Comedy Album for the second year in a row, while Arcade Fire are up for Best Alternative Album despite recent sexual assault allegations against frontman Win Butler.

The Academy usually has a soft spot for cross-generational all-star albums, but Elton’s The Lockdown Sessions, featuring Grammy darlings like Dua Lipa, Brandi Carilie, Charlie Puth, Lil Nas X, and Stevies Wonder and Nicks, received no nominations. Also a missed opportunity: A nod for Elton’s “Hold Me Closer” duet with Britney Spears could have set the stage for Spears’s triumphant Grammy comeback.

SNUB: The Recording Academy doesn’t freak out for Nicki Minaj

Earlier this year, 10-time nominee Minaj publicly complained that her Rick James-sampling hit “Super Freaky Girl” had been placed in the Pop category by the Academy, instead of her preferred Rap category. It turns out she received no nominations, in any category.

Post has long been a Grammy favorite — although he’s never won, he’s been up twice for both Album and Record of the Year, and has been nominated nine times overall previously. But his fourth studio album, Twelve Carat Heartache, only scored one nomination this year: Best Pop/Duo Group Performance for “I Like You (A Happier Song),” his duet with Doja Cat.

The American Idol winner has won eight Grammy Awards, including Best New Artist (making her only the second artist in Grammy history to receive that particular honor), and she has been nominated 16 times. But her ninth studio album, Denim & Rhinestones, was completely shut out of the Country categories this year.

The beleaguered diva, who was up for Best Pop Vocal Album in 2017 for Confident, released the best-received work of her career with the rock-reinvention album Holy F***. But apparently the Academy didn’t think it rocked hard enough, as it’s not up in any Rock — or Pop — categories this year.

SURPRISE: Viola Davis is now one letter away from an EGOT

The actress, who has already won at the Oscars, Emmys, and Tonys, received her first-ever Grammy nomination, in the Best Audio Book, Narration, and Storytelling Recording category, for her narrated memoir Finding Me. She’s up against some stiff competition: Lin-Manuel Miranda (who’s just an Oscar short of his own EGOT), EGOT-winner Mel Brooks, Jamie Foxx, and Questlove. But whether or not Davis wins the Grammy, she’s having a great year, with her film The Woman King soon likely to pick up some Oscar nods.

Legend, who was actually a presenter at the Recording Academy’s Nov. 15 nominations announcement, may already be an EGOT-winner — but he won’t be adding any more “G’s” to his mantel this year. His double-album Legend was not recognized at all by the Academy, with the singer-songwriter having to settle for just one nomination for his multi-artist collab with DJ Khaled, “God Did.”

SURPRISE: DJ Khaled did that

Did anyone expect Khaled to score six nominations this year? Another one, indeed.

SNUB: The Academy says no to Noah Cyrus

Noah Cyrus was nominated for Best New Artist last year despite having only released a few EPs, but this year, her critically acclaimed full-length debut, The Hardest Part, was passed over.

SNUBS: Nothing new for many Best New Artist hopefuls

Even with the Best New Artist category recently being expanded to 10 slots, there still wasn’t enough room for everyone. Breakout country stars Lainey Wilson and Zach Bryan were overlooked (country music in general was shut out in all of the Big Four categories), as were Dove Cameron, Tate McRae, Lauren Spencer-Smith, Em Beihold, and GAYLE. The GAYLE slight is especially puzzling, considering that GAYLE’s TikTok hit “abcdefu” is up for Song of the Year.

SNUB: The Academy doesn’t have unlimited love for the Red Hot Chili Peppers

This year, the six-time winners (and 16-time nominees) released their first album since 2016, Unlimited Love, which debuted at No. 1 on the Billboard 200; while its lead single “Black Summer” is up for Best Rock Song, the album itself didn’t get a Best Rock Album nod. Perhaps RHCP’s second album of 2022, Return of the Dream Canteen, which just missed the eligibility window, will fare better next time.

Perhaps it’s not a shocker that Raitt, who’s already won the Grammys’ Lifetime Achievement Award and 10 regular Grammys, would get some love from the Academy. She in fact picked up four more nominations this year… but no one expected her track “Just Like That” to be up for Song of the Year, competing against the likes of Beyoncé, Lizzo, Kendrick Lamar, Adele, and Harry Styles.