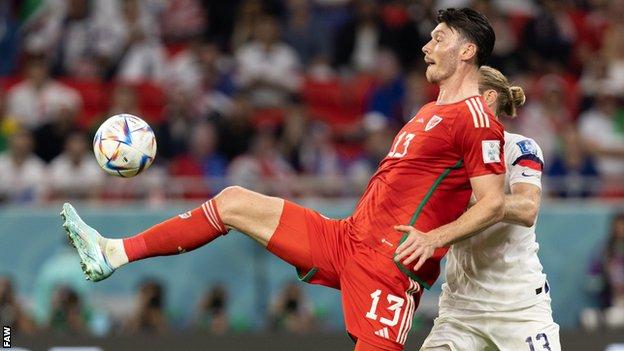 Wales striker Kieffer Moore is hoping to earn a first World Cup start to cap his remarkable rise to the top.

After changing the game as a substitute in Wales' opening draw with the United States, Moore is now targeting a start against Iran in Qatar on Friday.

"It's what you dream of as a little boy, to play at World Cups," he said.

"If I manage to start on Friday, it will be a very proud moment for myself and my family and one which will have taken a lot of hard work and dedication to get to."

Moore was surprisingly left out of Wales' starting line-up to face the USA, who dominated the first half and led 1-0 at the break.

The 30-year-old was brought on at half-time and transformed the match, giving Wales an attacking focal point and helping his side fight back to earn a draw in their first World Cup game for 64 years.

"I wanted to impose myself on the game and do what I could so hopefully I am in a position to start on Friday," said Moore.

"I knew what I had to do at half-time - just play my game really. To come away with a point from that game is a fair reflection.

"Every player wants to play every single game at a World Cup. Who doesn't want to play?"

At 6ft 5in, Moore is an imposing figure, but he is also a technically accomplished striker who is adept at bringing others into play.

He has been in fine form for Bournemouth this season, scoring three goals in his three most recent Premier League appearances.

It has been a long journey to the top of club and international football for Moore, who started his career with Paignton Saints in the South Devon League Division Two before joining Truro in the Conference South.

That was the first move of many for the forward, whose long list of former clubs also includes Dorchester Town, Viking in Norway, Wigan Athletic and Cardiff City.

Although Moore is now a Premier League player representing his country at a World Cup, he believes he has retained some of the qualities acquired during his days as a part-timer in non-league.

"Life experience. Being out in the real world. When you're in the academy, I suppose you are a bit sheltered from that," Moore said.

"I wouldn't say I've had a tough life but it's been a tough journey to get to this point, a lot of sacrifice and hard work.

"When I was working at the same time as I was playing football, it was a lot of hard work and a lot of sacrifices I had to put in. But ultimately that's led me to have this work ethos which I've carried the whole way with me and I still have now."