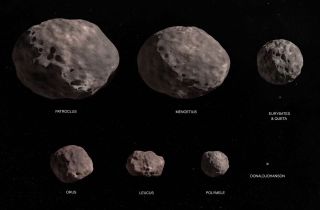 NASA's Lucy probe has gained a ninth asteroid destination for its 12-year mission.

Lucy launched in October 2021 and is bound for the Trojan asteroids, which, thanks to the pull of Jupiter's immense gravity, ride in the gas giant's orbit ahead of and behind the behemoth. In 2027, Lucy will become the first human-made object to fly past one of these asteroids.

The mission was designed to zoom past a main-belt asteroid then swing through a complicated itinerary of Trojan asteroids. And now, scientists have determined that one of Lucy's original target asteroids has a companion: another, tiny asteroid that orbits it and that Lucy will also be able to observe, Spaceflight Now report (opens in new tab)s.

Lucy's third target is an asteroid called Polymele, a gourd-shaped space rock that's roughly 13 miles (21 kilometers) from end to end. Polymele's shape is strange for an asteroid, suggesting that it's a remnant from the very early solar system — one that has managed to avoid collisions so far.

In March, astronomers observing Polymele in preparation for Lucy's eventual visit watched the asteroid pass in front of a star, blocking that star's distant light. In the process, they found something very curious: a tiny companion space rock.

"We got a really nice projected shape of Polymele, and then we were very surprised to detect an object about 200 kilometers (120 miles) away from Polymele," Hal Levison, a planetary scientist at the Southwest Research Institute and Lucy's principal investigator, said in a presentation last week, according to Spaceflight Now (opens in new tab). "It's 5 kilometers (3 miles) in diameter, and it's sitting almost exactly in Polymele's equatorial plane."

That companion does not have a name and won't have one until scientists know more about the asteroid's exact orbit, which might not happen until Lucy's visit. But some astronomers have jokingly begun calling it Shaun after the character in the animation "Shaun the Sheep."

Shaun is the second space rock to be added to the Lucy mission's itinerary: In 2020, scientists working on the mission determined that target asteroid Eurybates also boasts a small companion.

Join our Space Forums to keep talking space on the latest missions, night sky and more! And if you have a news tip, correction or comment, let us know at: community@space.com.

Rahul Rao is a graduate of New York University's SHERP and a freelance science writer, regularly covering physics, space, and infrastructure. His work has appeared in Gizmodo, Popular Science, Inverse, IEEE Spectrum, and Continuum. He enjoys riding trains for fun, and he has seen every surviving episode of Doctor Who. He holds a masters degree in science writing from New York University's Science, Health and Environmental Reporting Program (SHERP) and earned a bachelors degree from Vanderbilt University, where he studied English and physics.