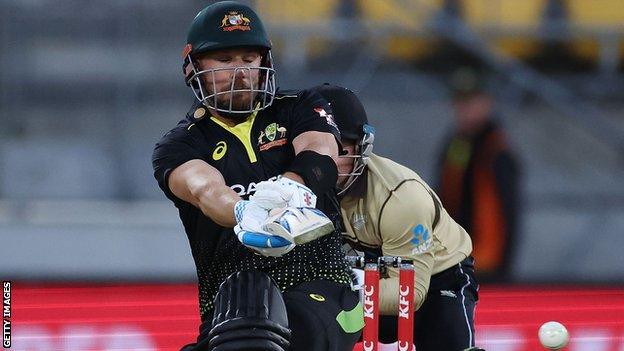 Aaron Finch became Australia's highest run-scorer in men's T20 cricket as his side defended 156-6 to set up a series decider against New Zealand.

They lost regular wickets on a tricky pitch with Finch making an unbeaten 79 off 55 balls - including taking Kyle Jamieson for 26 off the final over.

New Zealand were restricted to 107 in reply, with Kane Richardson taking 3-19 and three others taking two apiece.

The final game in the five-match series is at 23:00 GMT on Saturday.

The Australia innings was underpinned by Finch but he struggled for timing on a pitch that was two-paced and offered some spin, until the final over.

He took two off the first ball and then hit three successive sixes - two over cover and one over log-on - before sending the last ball over mid-wicket for another six.

In the course of his innings, Finch overtook David Warner to become Australia's highest run-scorer, leaving him sixth on the all-time list, and he also became the first Australian to hit 100 sixes in international T20 cricket.

Marcus Stoinis' 19 was the next highest score with leg-spinner Ish Sodhi impressing in taking 3-32.

Despite Finch's last-over heroics, the total felt below par but New Zealand were never able to get going in their reply.

The limped to 41-4 at the halfway point, with key batsmen Martin Guptill and Kane Williamson both out, and Glenn Phillips was run out in comical fashion with him and Devon Conway both stranded at the non-striker's end.

Jamieson offered some late resistance as he made an 18-ball 30, but Australia's spin trio of Ashton Agar, Adam Zampa and Glenn Maxwell were key, taking 6-49 from 11 overs, as Australia wrapped up a comfortable 50-run win.

Fans will be able to attend the series decider after lockdown restrictions were lifted in Wellington.