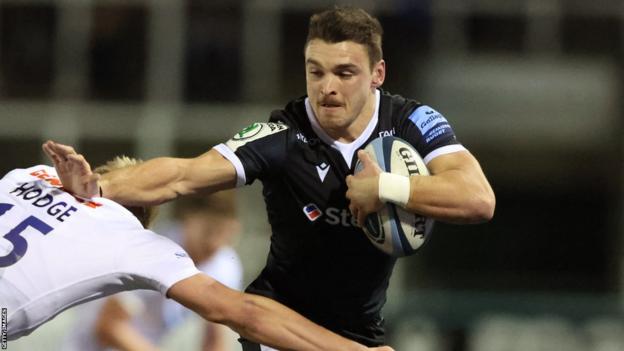 Newcastle inflicted a fourth defeat in five games on Exeter with a narrow Premiership win at Kingston Park.

Newcastle led by seven points at half-time as George McGuigan, Mateo Carreras and Guy Pepper went over for the hosts with Ruben van Heerden and Jack Yeandle replying for the Devon side.

Both sides had tries disallowed for knock-ons after the break as Brett Connon added a penalty for Newcastle.

Scott Sio got a late try for Exeter but Newcastle held on to claim the win.

Falcons remain ninth in the table but are level on points with Bath and Leicester, while Exeter's losing bonus point sees them move into fifth place above Gloucester who lost at Harlequins.

McGuigan was mauled over after a fifth-minute line-out for his seventh try in nine matches as Newcastle's first foray into the Exeter 22 ended in points, before van Heerden levelled the scores with a pick and go from under the posts five minutes later.

Having put in a try-saving tackle on Matias Moroni, Exeter full-back Josh Hodge missed a challenge on Carreras that allowed the Argentina winger to sprint in for Newcastle's second after 18 minutes as Exeter struggled at the breakdown.

Exeter had a good chance foiled by a strong Newcastle defence 12 minutes before the break, but they eventually got through from close range shortly before half-time through skipper Yeandle.

However Pepper replied with the final play of the half as he dived in after a maul was collapsed by van Heerden for which the Exeter lock was sent to the sin-bin.

Falcons should have extended their lead 12 minutes after the break, but Freddie Lockwood knocked on as he went to touchdown after a good break by Micky Young before Connon added three points.

Exeter replacement Dan Frost coughed up Dave Ewers' pass as he looked to go over with 13 minutes left, but they finally breached Newcastle's defence as Sio got his first try for the club after relentless pressure.

But Newcastle held on to send Exeter back on the league's longest away journey without a win for the first time January 2018.