Opinion – How Iranian Women Are Charting the Course for Freedom 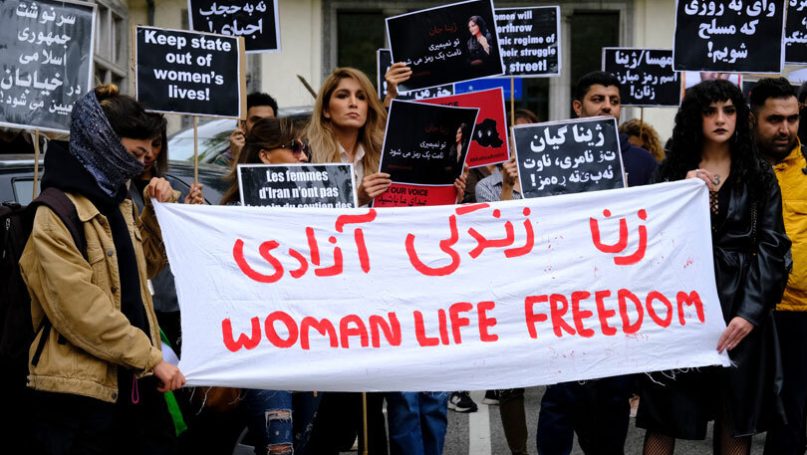 More than two months have passed since Mahsa Jina Amini’s death in police custody on 16 September. She was charged for not wearing her headscarf ‘properly’. Amini’s tragic death sparked nationwide protests that demand freedom and an end to the tyranny of the Islamic Republic of Iran. The Islamic Republic has responded with an iron fist, as it has many times before during civil unrest. Latest statistics reveal that the death toll has reached 344, of which 52 are children. 15,820 people have been arrested. The real numbers are likely higher. This time, however, the Islamic Republic’s brutal crackdown has failed in its attempt to quash the protests.

The current movement is an amalgamation of all the grievances protested against the Islamic Republic. These include decades of grave infringements on basic human and women’s rights, corruption, mismanagement and isolation from the world at the hands of the Islamic Republic. To be sure, uprisings have occurred before: in 1999 demanding justice and accountability for student murders, in 2009 for election rigging, and more recently and  more frequently in 2017 and 2019 for the rising costs of fuel and food prices.

In these latter demonstrations, women staging their own protests against the compulsory hijab, a main tenet of the Islamic Republic, became more pronounced. In 2017, one protester, Vida Movahed, stood above a plinth on a busy street, holding a stick with her white headscarf tied on it. Her image went viral on social media. Other women started emulating her act of civil disobedience by tying white headscarves on a stick and waving them in the air while standing on a plinth on crowded streets. These images depicted a strong act of defiance that questions the authority of the Islamic Republic and undermines its control over the ‘national’ narrative.

Despite the brutal crackdowns, Iranian women and the LGBTQ+ community have gained more widespread support through social media, thereby creating a hostile tension with the Islamic Republic that has fully imploded today. This time, women and gender minorities are at the heart of the protests and support reigns in from all ethnicities and other minorities. This unity, led by women’s activism, has meant that the movement for democracy has become more powerful.

The fact that this current movement is centred on women’s struggle for bodily autonomy marks a significant progressive change in Iranian society, which has historically gone through polar opposite forms of authoritarianism. Reza Shah Pahlavi’s unveiling act in 1936 banned women from wearing the veil in public, with his son Mohammad Reza Shah abrogating it soon after he got the crown. After the 1979 Islamic revolution, many women fought to retain the right to choose to wear or not to wear the veil. However, women’s calls for solidarity fell on deaf ears as the men they had helped to overthrow the Shah did not believe veiling was their issue. The lack of unity and solidarity among revolutionaries allowed the clerical establishment to enforce draconian laws on female bodies. Ayatollah Khomeini imposed the veiling act in 1983, forcing women and girls to veil in public. Thus, historically women’s bodies have been used by the different governments as tools to exert their power and women’s bodies have thus been reduced to embody the state and its narrative.

The politicisation of the female body has rendered it hard for Iranian women to freely express themselves. Throughout the course of the reign of the Islamic Republic, however, Iranian women have sought to challenge and resist the policing of their bodies in different ways. From loosening the hijab to let some strands of hair out, to wearing colourful veils and shorter jackets as manteaus, many brave and courageous women have knowingly risked imprisonment to push back against the strict implementation of this draconian law. In the current protests, Iranian women are removing their veils in public acts of defiance, signalling a full rejection of state-mandated law. With social media handing more control to ordinary women to narrate their struggle, the Islamic Republic has lost the battle over the discourse on women.

What makes this movement even stronger is the solidarity and unity of Iranians, especially among veiled and unveiled women as well as among women and men. These groups have historically been pitted against each other through the insistence of the Islamic Republic to dominate the narrative on Iranian women that warrants complete control of women’s bodies by the state. Furthermore, another historical precedence is the support given to women by men who stand shoulder to shoulder with them in the fight for freedom.

Social media is mobilising a new generation of Iranian women against the Islamic Republic. By posting photos and videos of themselves under topical hashtags, they are documenting their defiance of this draconian law altogether, knowing that this act carries a dangerous risk of imprisonment and torture. Many have risked imprisonment, including Vida Movahed, Narges Hosseini, Sahar Khodayari, whilst others were forced to flee for their safety. Nevertheless, Iranian women persist. By raising their voices, they have managed to unite Iranians in the diaspora who speak up for them as well.

While no woman or girl should have to face violent arrest in the first instance, there is an important point to be made about the difference between these women’s fate and that of Mahsa Jina Amini, that reflects the increasing brutality women face at the hands of the Islamic Republic. With decades of resistance by Iranian women, there have been pushbacks against the strict dress rules in public, meaning Amini’s veil and manteau matched that of countless other young Iranian women today. Nevertheless, her violent arrest and subsequent death in police custody is a result of an arbitrary arrest by the local ‘morality police’, who are known for making up their own guidelines on the acceptable form of hijab.

Decades of resistance by women against the strict enforcement of Islamic dress codes aimed to push back against the Islamic Republic’s narrow view of what forms of coverings were acceptable. Through posting about their acts of civil disobedience online, Iranian women managed to build momentum for their cause. After the tragic death of Amini, they have become even more courageous and brave in their defiance by burning their government-mandated headscarves in bonfires as an act of protest against the Islamic Republic as a whole.

Unity has emerged, fuelled by the feminist slogan ‘Jîn, Jîyan, Azadi’ in Kurdish, ‘Zan, Zendegi, Azadi’ in Persian (‘Woman, Life, Freedom’), under which every voice against oppression and for freedom can be heard. We are witnessing an ongoing feminist revolution, in which Mahsa Jina Amini’s tragic death will be forever remembered as its spark. For woman, for life, for freedom.

Ahou Koutchesfahani is a PhD candidate at the Department of War Studies at King’s College London. Her research is concerned with feminist politics and social movements, with a focus on Iran. She has written features for the Atlantic Council’s IranSource and for King’s College London and has presented at EISA 2021. Follow her on Twitter: @ahou_doe.