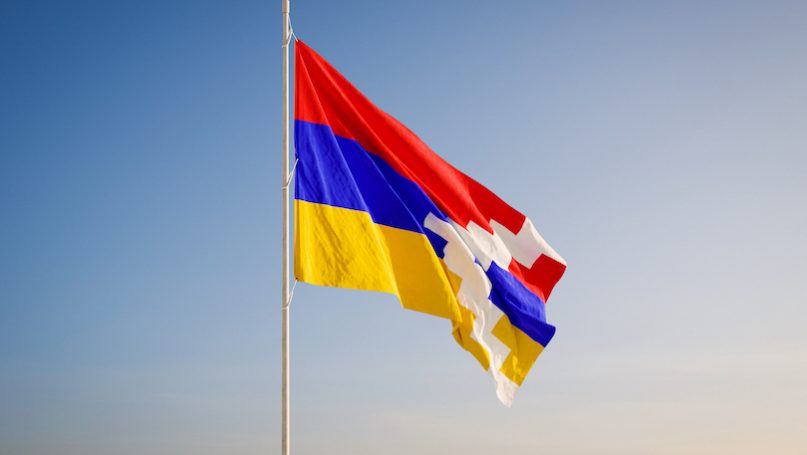 The question of the future of the Nagorno Karabakh is again topical right now, even though it is overshadowed by the war in Ukraine. While the EU and US, as part of the Organization of Security and Cooperation in Europe’s (OSCE) Minsk Group (one can say that France is de facto representing the EU), have become more active in their engagement with the conflict, Azerbaijan’s autocratic leadership is pushing for the dismantling of the group.

One reason behind this push is the recent statements by both EU and US officials about Nagorno-Karabakh Armenian’s right for self-determination. Unsurprisingly, Baku is still vehemently rejecting this right, while some are yet again pushing for the old argument of granting Nagorno-Karabakh autonomy (according to the “Åland model”) and guaranteeing the region’s population minority rights in a “multi-ethnic Azerbaijan”.

The main problem with these theories is that they are flawed at their very induction, when the authors, deliberately one might add, overlook one substantial variable in the equation – namely the state of democracy in Azerbaijan. An outspoken authoritarian regime, Azerbaijan ranks lowest in regard to democracy in Europe (second worst only to Belarus) and at the absolute bottom segment of the Media freedom index, just below Belarus but above Russia. Once we add the past and present policies of ethnic cleansing and eradication of cultural monuments to erase any trace of Armenian presence in Nakhichevan and Karabakh, any premise for solutions to the conflict change dramatically. Then, the whole subsequent argumentation and these suggested solutions fall apart because they are based on erroneous assumption, leaving in reality only one viable solution. This solution is, namely, the one proposed in the Madrid Principles, which grant the people of Nagorno-Karabakh their right to self-determination and will most likely result in a secession.

The question of secession is, however, not as straightforward as it may seem to be. The critics would suggest that minorities don’t have the right to external self-determination (which might lead to secession), but only the right to internal self-determination. Indeed, the reasoning for their claim stems from the general position articulated by The UN (1992), stating that “if every ethnic, religious or linguistic group claimed statehood, there would be no limit to fragmentation, and peace, security and economic well-being for all would become ever more difficult to achieve.”

This statement, as justified as it maybe, requires qualification. First of all, while the concern is valid, it is highly unlikely that we would face a mushrooming of aspiring independent nations, regardless how volatile they might be. Although the volatility of these aspiring nations would automatically revert the situation in the vast majority of the cases, there is a legitimate concern for the abuse of such a liberal implementation of peoples’ right for self-determination. Simply put, instead of a straightforward annexation, a foreign power could entice a local insurrection under the pretense of aspiring for ‘independence’, move in with forces to ‘safeguard’ the right of the local population and then hold some mode of ‘plebiscite’ or ‘referendum’ to seal the deal and feign democratic legitimacy. Needless to say, the latter would require several violations of international law (as we e.g. see in the ongoing Ukraine war) before coming to the “expression of will”, i.e. a referendum, in which the most likely response from the international community will be refutation. Secondly, this assumption by the UN foresees that the basic rights of the population are met by the government of the state they live under. It is here that the issue of secession becomes a valid solution.

This observation above is also why the issue of secession is less controversial within the international legal community when it is interpreted within a colonial context, but more so when in a post-colonial frame. The post-colonial application has, however, developed quite considerably since the 1990s, even though there are still widespread varying views on the subject. This observation notwithstanding, there are both concrete legal cases (which I’ll return to shortly) as well as a theoretical discourse concerning the so-called “remedial” secession in contrast to a bilateral secession, which is common in the case of former colonies such as that of India’s secession from UK or Namibia’s from South Africa. The latter is in fact highly relevant in the case of Nagorno-Karabakh, given the UN rationale (through the ICJ) for the Namibian people’s right to secession due to South Africa’s failure to fulfill its obligation to guarantee the well-being and the security of the Namibian people.

A more recent topical case is the verdict of the Canadian Supreme Court regarding the Secession of Quebec (1998). Here, the Canadian Supreme Court stated that “A right to external self-determination (which in this case potentially takes the form of the assertion of a right to unilateral secession) arises in only the most extreme of cases and, even then, under carefully defined circumstances.” This is nothing new however. The famous Åland case, The Report of the Commission of Jurists, (League of Nations, 1920) explicitly pointed out one exception in which citizens had the right to secession, namely “when the State lacks either the will or the power to enact and apply just and effective guarantees.” Simply put, if internal self-determination (regarding democratic values, culture, language, economy, stability, security etc.) are not met, the people have the legitimate right to external self-determination as a last resort, which is highly applicable to the Nagorno-Karabakh case. The provisional verdict by the ICJ on December 7, 2021 is quite indicative of the long list of democratic and human rights violations committed by Azerbaijan against the Armenian population of Nagorno-Karabakh.

This normative framework, as demonstrated by the Åland case, has since the 1920s recurred within international circles. For instance, this can be seen by its implicit reference in UN’s Declaration on Principles of International Law concerning Friendly Relations and Co-Operation among States (1970) underlining the obligations of a state in regard to the territorial integrity vs. people’s right for self-determination. Here, territorial integrity is defended only when the state performs its obligations to provide a “government representing the whole people belonging to a territory without distinction as to race, creed or colour.” Once the latter guarantee fails, the people shall have the right to self-determination, even if it lends itself to secession.

It is here that we return to the issue of democracy in Azerbaijan, or rather the flagrant lack of it, and how the existential threat against Nagorno-Karabakh’s population justifies their right to determine their external status. It should also be pointed out that this decision does not automatically and necessarily imply the practical issue of a permanent ‘independent’ Nagorno-Karabakh and the need to join the UN as a sovereign member-state. In fact, in the case of the Karabakh Conflict, this does not mirror the origins of the conflict in the first place. Since 1918, the plea of the people of Nagorno-Karabakh has been to be part of Armenia, a request which was repeated in 1923, 1965, 1977 and then again in 1988. The only reason why we are speaking of an ‘independent’ Nagorno-Karabakh is as an interim status and in respect to the ongoing mediation by OSCE and its Charter, the Helsinki Final Act, which states that “frontiers can be changed, in accordance with international law, by peaceful means and by agreement.” Thus, a remedial secession of Nagorno-Karabakh from an autocratic Azerbaijan is not only perfectly aligned with international law, both explicitly and normatively, but it is also the only viable solution to a conflict in order to avoid the greater risk or potential of broad ethnic cleansing against the native Armenian population.

The latter, ethnic cleansing, is by no means a hypothetical scenario. Given the historicity of the conflict, recent developments since the 2020 war,  and the rhetoric from Baku, the threat of ethnic cleansing is very real and imminent. The 2020 war not only cleansed one third of Nagorno-Karabakh of its Armenian population, but subsequent action by the administration in Baku have also indicated a policy of forcing ethnic Armenians out in one way or another. The question will be whether the democratic international community will allow it to take place or not, especially in light of the war in Ukraine.

The war in Ukraine and the international embargo on Russian energy sources has put the spotlight on Azerbaijan as an alternative supplier of natural gas to Europe. The fear that Europe and the international community would turn a blind eye to the state of democracy and human rights in Azerbaijan is of course even more palpable when it comes to the likely fate awaiting the Armenian population of Nagorno-Karabakh; especially if the region is again put under Baku’s suzerainty. The war in Ukraine has undoubtedly proven that the international community can stand in solidarity to defend other’s rights against an autocratic assault. Nevertheless, the war in Ukraine has also blatantly demonstrated that we can overlook and sacrifice those who are not in our close proximity for the sake of our own national interests. Hopefully the Nagorno-Karabakh Armenians will not be sacrificed at the altar of realpolitik.

Vahagn Avedian, PhD, specializes in research concerning the fields of genocide, human rights, peace and conflict and democracy. His book, Knowledge and Acknowledgment in the Politics of Memory of the Armenian Genocide (Routledge, 2019) includes the discussion about the Karabakh conflict within the context of the Armenian Genocide and its impact and legacy on the region. He may be followed on Twitter @VahagnAvedian.