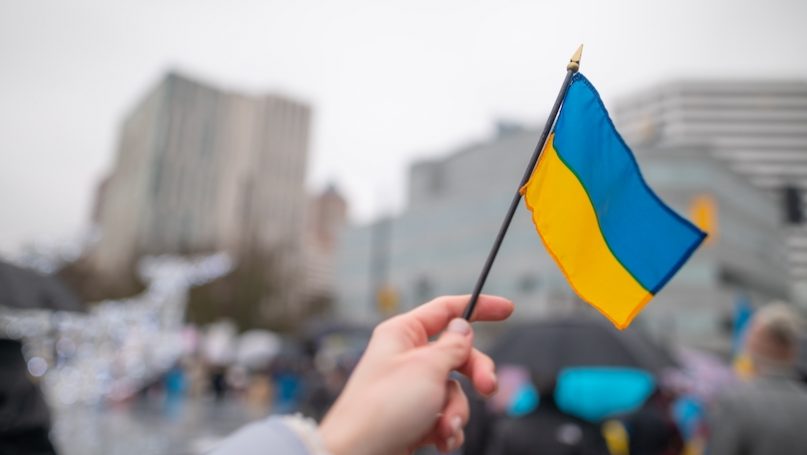 It is understood that most Ukrainians do not want Putin’s invasion. It is also understood that in general terms when someone invades your country, you fight, seek (and receive) support from allies – and do so with the ultimate goal of restoring sovereignty. Yet, the question of Western culpability is separate. Answering it does not depend on Ukrainian opinion, and does not prohibit weapon deliveries. Yet Westerners are in a self-imposed mental lockdown “lest Putin succeed at creating division”. This attitude may well be thwarting any solution to the conflict. It is possible to give Putin zero recognition for his war, and yet some recognition where his concerns might be real. Of the parties involved, only the West could make concessions at limited cost. If the West has any change in its pockets, it has a moral obligation to dig it up.

Before Russia’s invasion, various reputable Western outlets ran disconcerting reports of a growing hold of far-right groups on the Ukraine state, including Reuters, the BBC,  Time, and the Guardian. One can discuss the extent of this problem, whether it has gone away, or even whether these reports had it wrong, but one cannot suddenly decide it’s all made up without discussing events in Ukraine. The West might think that integrating Ukraine into NATO would provide Ukraine with sufficient security to reduce the appeal of the far-right. Putin might think that NATO protection would take the problem beyond reach, without guarantees of a solution. These issues interact.

The dissolution of the Soviet Union really was chaotic. Indeed, many a Westerner cherishes the idea of young Putin frantically burning classified papers in East-Germany. The history of Crimea is also complex. Even if feeling that, say, over 50% of the argument favors Ukrainian control of Crimea, then certainly assuming Ukraine in a military alliance that Russia sees as competitive (right or wrong, Russian leadership is certainly sincere on this point) does not show the necessary sensitivity. Interestingly, the Brookings Institution writes that “Moscow did not come out hard” against Ukrainian NATO membership in 2006, but did do so in 2008. Hence, any scholar should eagerly ask: what happened in 2007? Putin suddenly waking up as a sphere-of-influence fanatic seems improbable.

These are some examples of potential discussion topics. Yet the Western elite seems to have decided that this is no time for questions. Since its columnist Katrina vanden Heuvel called for “a real debate” on Ukraine, the Washington Post has published some 40 opinion pieces calling for more weapons, reinforcing ideas of Putin’s wickedness, and so forth, but none discussing any Western contribution to the mess: not a real debate.

This is a tangle. The West’s refusal to do truth finding because Putin might “exploit” the results may obstruct a peaceful solution to the conflict, disagrees with its own values, and has not stopped Putin from anything.

It does not work on more neutral observers either, including democracies Brazil, Indonesia, India and South-Africa. Bloomberg recently reported what some saw coming months ago: what was to be international opposition against Russia is mostly just Western opposition. Bloomberg suggested that other countries might be strategic exploiters, misled by Russian propaganda, or subject to anti-colonialist sentiment. This explanation reserves moral, values-based thinking for the West while imputing less lofty motives on others – a dangerous idea alas all too common in the West. There exists an alternative explanation: they might simply spot inconsistencies in the Western narrative of unprovoked Russian aggression. In reasonable doubt, any non-Western leadership considering a moral stance against Russia will indeed turn to prioritizing its self-interest very quickly.

When does one relinquish the narrative most: sticking to a story that is clearly an oversimplification of reality, or admitting that an adversary might have a point? The former, it seems. Then why does the West stick to its narrative so forcefully? Is it a moral version of the sunken costs fallacy? Can the West really not hang together discussing a more complex narrative in which Russia’s concerns do not constitute just cause for atrocities, but may nevertheless have some basis? This narrative could serve as a starting point for constructive diplomacy and may well be closer to the truth. It could also allow Putin to claim some result of this dreadful war, meaning he could end it, while debate in Russia could reach much needed calmer waters.

This does not mean giving Russia whatever it wants, nor rewarding violence. When in doubt, sending along some more HIMARS could clarify the message. Yet not conceding now what should have been conceded years ago would be obstinacy beyond reason.

Maarten Wensink is a statistician and medical doctor who specializes in real-world data. He works as an epidemiologist in the private sector and formerly was an associate professor in epidemiology at the University of Southern Denmark.