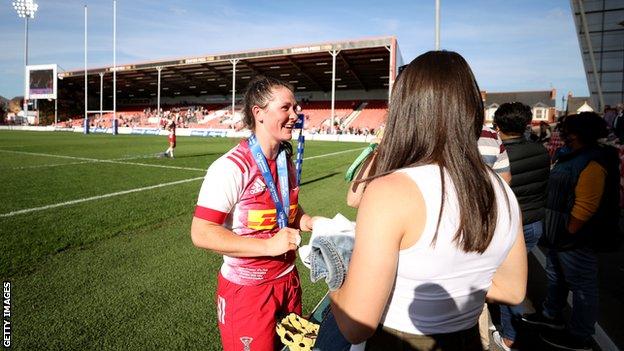 A couple of times a year, the Robinsons have a wardrobe dilemma.

Emily - a Harlequins flanker - jokes that she is handy with a sewing machine and could whip up some half and half clothing for her parents to wear when she faces younger sister Flo - Exeter's scrum-half.

For the moment the Robinsons' parents make do with each representing a different team in their kit choices, but of course neither can fully support one side.

They will be entirely neutral when they travel to Twickenham Stoop to watch their daughters play each other in the Premier 15s on Saturday.

"They want both of us to do well and don't particularly want a team to do well," Emily explains.

"Flo is a really good competitor. I don't know many people as competitive as her.

"We're really close and we'll look at each other and know exactly what we're thinking. When we go down for a scrum, I'll catch eyes with her. It's quite funny."

The 21-year-old says she and Flo have always been very close, but adds: "I want to beat them, there's no question about that.

"She has the same attitude as me. She will not give anything up and I don't think I will either."

'My dad sang the Exeter song and riled me up'

The Chiefs have some task ahead as they travel to the home of the defending champions, who have scored at least 50 points in each of their opening two matches this season.

Exeter have managed to beat Quins before, edging a one-point win seven months ago in their first campaign in English women's rugby's top flight.

Emily has had her eye on the Devon side this time, travelling down last weekend half in her capacity as a sister and half as a scout as she watched Chiefs' 54-0 victory against Sale.

"I was on my phone a lot writing notes," she says.

"They have got a song that they sing in the stand. My dad was singing the song and that sort of riled me up a bit, which was good.

"They're a really strong team, we know never to underestimate them."

'World Cup is a big jump'

The back row explains that Quins have an added "confidence" after winning their first league title, having fallen short in the final against Saracens twice before.

That victory may have boosted Emily's chances of earning a first England cap, with both she and Flo hoping to be picked for the World Cup in New Zealand in 2022.

The pair have been invited to England camps before and Emily knows that every performance for their club counts with four Tests coming up for the Red Roses in November.

Having begun her rugby journey aged six, much has changed during the forward's time in the sport.

When she was young, Emily had never heard of any female players and instead jokes "I probably had some idea that I would play with James Haskell".

Now, the Robinsons are two of many female role models for young players to look up to.

Emily is taking a measured approach, explaining: "If I think I could possibly go to the World Cup, that is quite a big jump.

"I try to keep smaller steps. If I look after how I'm playing then hopefully I will get invited into training and I'd go from there."

Like many women's rugby players, Emily balances those World Cup ambitions with a career.

She trained as a carpenter aged 18 after hearing about the job via a connection at one of her old rugby clubs.

Apparently it is similar to rugby in that "everyone's got their own job and you're working to see it through to the end".

The job also means she is head of DIY in her new house, a seemingly wide-ranging role.

"Changing a lightbulb, removing spiders from the house - that's me," she jokes.

On Saturday Emily's sole focus will be the Twickenham Stoop turf, where a big win could help Quins move ahead of two-time champions Saracens at the top of the table on points difference.

Whatever happens she knows who she will be talking to straight after the match, saying win or lose "all will be fine after the game" with her and her sister.

"Rugby is a massive part of our lives and we're constantly talking about rugby," she adds. "We're sisters above and beyond."