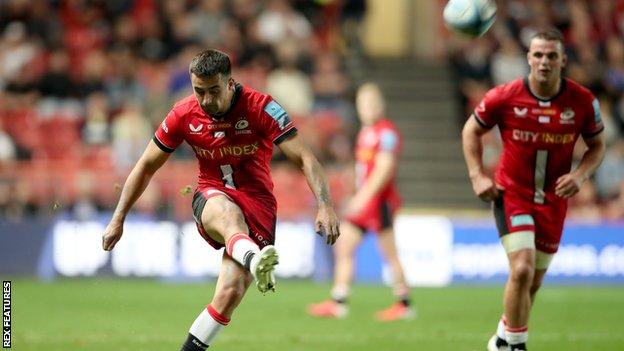 Alex Lozowski kicked 21 points as promoted Saracens won at Bristol Bears on their return to the Premiership.

Bristol fly-half Callum Sheedy and Lozowski traded penalties to leave the match poised at 9-9 at half-time.

Lozowski punished the Bears as their penalty count mounted, and then set up Alex Lewington for the game's only try.

Saracens won five Premiership titles and three European Champions Cups but had to navigate a truncated campaign in the Championship as punishment for their persistent breaches of spending rules.

Yet Mark McCall's men settled back into life in the Premiership despite being without their British & Irish Lions contingent on the opening night of the new season.

The first half proved to be a kick-fest, with a combined 49 from open play - although neither side landed a successful 50:22 kick following its introduction among several new laws for 2021-22.

Bristol played an attacking brand of rugby on their way to top spot - and a semi-final defeat by Harlequins - last season but there was little Bears flair on show as the visiting defence frustrated the Ashton Gate side.

Sheedy had missed a penalty to make it 12-3 just before the half-hour mark, but Saracens never looked back when two penalties in three minutes gave them a six-point cushion after 47 minutes.

After adding two more penalties Lozowski, who spent last season on loan in France with Montpellier, put a grubber kick behind the Bears defence for Lewington to finish in the corner with 10 minutes remaining.