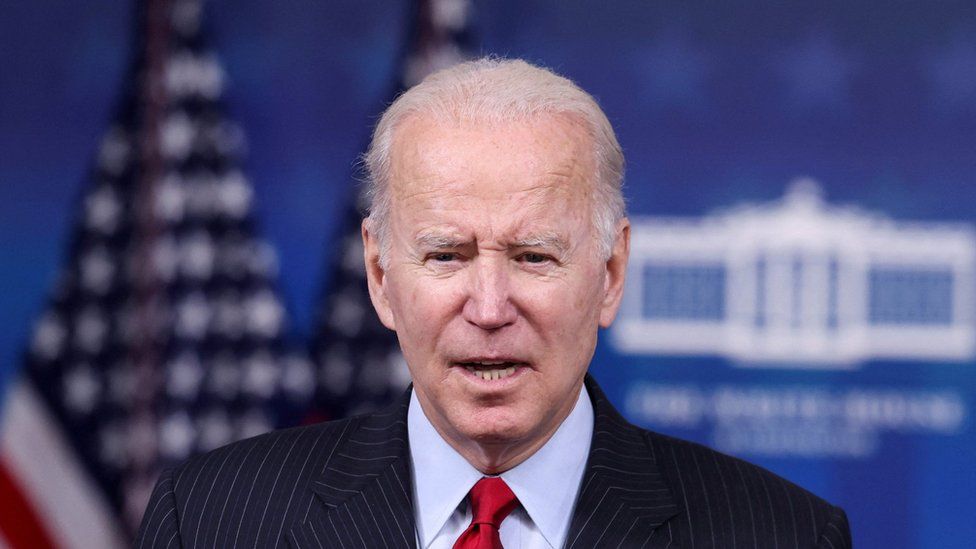 Joe Biden is under pressure as petrol prices soar

US President Joe Biden has called for a three-month suspension of America's national gasoline tax in response to the country's soaring energy prices.

With national elections for Congress coming in November, Mr Biden is under pressure to respond.

Analysts say that removing the levy would have limited impact on household petrol and diesel costs.

Political support for the gas tax holiday, which would require an act of Congress, is also uncertain, with members of Mr Biden's own party concerned that the move would primarily benefit oil and gas firms.

The White House acknowledged the criticism, but said policymakers should do what is in their power to try to ease the strain on families.

"A gas tax holiday alone will not, on its own, relieve the run-up in costs that we've seen," the administration said in a statement.

"This unique moment when the war in Ukraine is imposing costs on American families, Congress should do what it can to provide working families breathing room."

What is the US gas tax?

Currently, the US imposes a tax of roughly 18 cents per gallon on gasoline and 24 cents on diesel, using the money collected to help pay for highway infrastructure.

Eliminating the levy through September, as Mr Biden has proposed, would cost the government an estimated $10bn.

The move is the latest effort from countries around the world to address the soaring energy costs.

Oil prices have surged since last year, as demand outstrips supplies constrained by cuts that many firms made after the pandemic hit in 2020 and prompted demand to crater.

As the war in Ukraine pushes Western countries to shun oil from Russia - a major energy producer - that has also contributed to the crunch.

"Pausing the federal gas tax will certainly provide near-term relief for US drivers, but it won't solve the root of the issue - the imbalance in supply and demand for petroleum products," a spokesperson for the American Fuel and Petrochemical Manufacturers industry group said.

It said longer-term policies are needed to boost US energy production.

New Yorker Daniel Moran was at the gas pump on Wednesday, filling up his RV ahead of this weekend when he is taking his family on a camping trip.

Normally, his family plans at least two or three such excursions over the summer. But this year, he said, the surging gas prices will likely limit them to just one. He handed over $80 to the station attendant, shaking his head.

Mr Moran, who owns a tire shop in Brooklyn, said he was sceptical that suspension of the national gasoline tax would make a difference, noting that New York had already put in place a similar policy for its state gasoline tax.

"It's still going higher," he said, nodding toward the station sign, where prices were posted well north of $5 a gallon. "I would like to see some prices getting reduced but I know it's almost impossible."

Mr Biden has already taken steps like releasing unprecedented amounts of oil from national stockpiles and lifting taxes on imports of solar panels.

As well as suspending the national gasoline tax, Mr Biden is urging similar steps by state governments, which typically impose their own taxes, often higher than the federal government's.

Some states, including New York, have already suspended those charges.

The president has also called for oil and gas firms to increase their output, intensifying his criticism of the sector in recent weeks.

However, there is little political momentum in the US for funding relief for households through something like the UK's recently announced windfall tax on energy company profits.