Prices in Turkey rise at fastest pace for 24 years 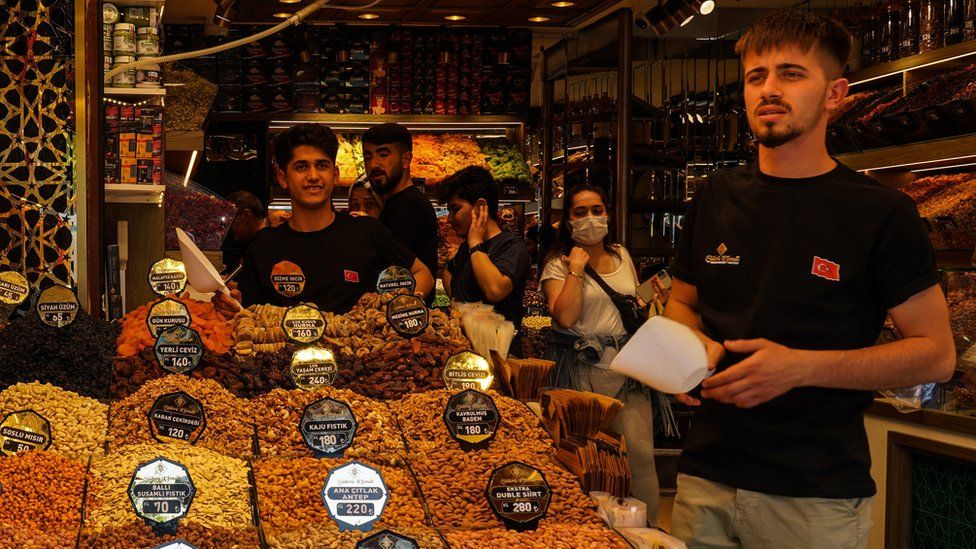 Prices in Turkey are rising at their fastest rate in 24 years, according to the latest official figures.

The annual rate of inflation, the pace at which prices rise, hit 78.62% in June, which was slightly higher than expectations.

Transport costs and housing saw some of the sharpest price rises, worsened by the Ukraine war.

Inflation has surged since last year, when the Turkish president cut interest rates to try to boost the economy.

Usually countries would increase interest rates in an attempt to cool inflation. But President Recep Tayyip Erdogan has described interest rates as "the mother and father of all evil", and has used more unorthodox policy to try to dampen prices including intervening in foreign exchange markets.

Last year's cut in interest rates from 19% to 14% has led to a fall in the value of the Turkish lira, which means it costs more for the country to import goods from abroad.

In the latest inflation figures, transportation saw the biggest rise in costs, climbing 123% over the past year.

Food and non-alcoholic beverages were close behind with price rises of 94%, while the cost of furnishings and household equipment was up 81%.

The overall inflation figure was the highest since September 1998, when annual inflation hit 80.4% and Turkey was battling to end a decade of chronically high inflation.

As inflation in Turkey continues to smoulder, the nation's economy is also contending with the effects of a plunging currency value. The Turkish lira has shed nearly half its value in the past year. That means consumer spending power is in decline as the cost of goods and services continue to skyrocket.

Despite reaching a 24-year high in June, economists had expected the inflation rate to rise even further. This is the second month in a row official data has missed forecasts, and that is continuing to stoke concern about the reliability of official data from Turkey's statistics agency. Helping to fan those flames: ahead of the release of May's inflation data, the head of the price statistics department resigned citing health reasons.

While times are tough for people living and working in Turkey, favourable exchange rates are helping lure international travellers to the country for summer holidays. But Turkish holidaymakers are coming in fewer numbers than in the past, and to afford it, they're staying fewer days and paying off the cost of travel over 10-12 months.

The surge in prices is making it tough for businesses.

"I've never experienced a season like this before," said hotelier Volkan Yorulmaz, the general manager of Kemer Holiday Club in Antalya. "I can't budget my spending because the costs change from day to day. The all-inclusive concept is no longer sustainable.

"Over 50% of our guests come from Russia or Ukraine, so without them, the beginning of the season was a little problematic.

"Turkish people are trying to come on holiday. They use credit cards, or pay in instalments, or are shortening their planned holidays, to make it affordable for them."