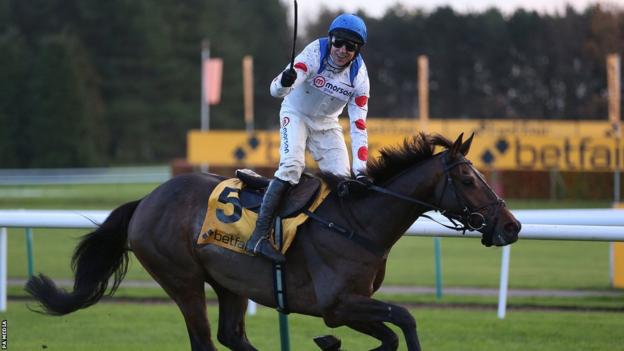 Protektorat put in a superb display to land a comfortable win in the Betfair Chase at Haydock.

The horse, part-owned by former Manchester United manager Sir Alex Ferguson and ridden by Harry Skelton for his brother Dan, won by 11 lengths.

Odds-on favourite A Plus Tard, who won last year en route to Cheltenham Gold Cup victory, was never in contention.

The 1-2 chance failed to make an impact and was pulled up before the third last by jockey Rachael Blackmore.

Three-time winner Bristol De Mai set the early pace under Daryl Jacob but once Protektorat challenged as they turned into the home straight, the seven-year-old looked the more dangerous.

Although Eldorado Allen briefly matched him, Skelton quickly got clear on the 15-2 shot and the final three fences were safely negotiated as he extended his lead.

It puts him in contention for next year's Cheltenham Gold Cup, but Dan Skelton said the horse was unlikely to run in the King George VI Chase at Kempton Park on 26 December.

"When you win a race against a horse like A Plus Tard it is special," Ferguson told ITV Racing.

Harry Skelton added: "This is what real good horses can do. He is progressive and getting better.

"We knew today might be our day and it was."

Earlier, at Ascot, Constitution Hill, the favourite for next year's Champion Hurdle at Cheltenham, was ruled out of the Coral Hurdle on Saturday morning by trainer Nicky Henderson because of unsuitable ground.

The going at the Berkshire track had been changed to good, good to soft in places despite overnight watering.

In his absence, just four went to post and it was Goshen (6-5) who capitalised for Jamie Moore to make a winning return to hurdles.

The fast-drying Ascot ground saw a raft of withdrawals across the card with the Ebony Horse Club Novices' Limited Handicap Chase seeing just one runner, meaning a walkover for the Paul Nicholls-trained Milan Bridge.