Q&A: Ukraine’s Haidai on the battle for Severodonetsk, Lysychansk

Russian forces have taken control of the eastern Ukrainian city of Severodonetsk, in Ukraine’s Luhansk region, delivering a significant victory for President Vladimir Putin, four months after he ordered his troops into Ukraine.

The fall of Severodonetsk on Saturday came after the strategic city – with a pre-war population of 100,000 – endured weeks of heavy bombardment. The battle culminated with a Ukrainian decision to retreat after street-by-street fighting in the city’s industrial zone, where Ukrainian fighters had held out for weeks in the Azot chemical plant together with hundreds of civilians.

The governor of Luhansk, Serhiy Haidai, told Al Jazeera on Sunday that Ukrainian troops decided to withdraw from Severodonetsk because “all the defensive structures had been shelled so much and destroyed”.

“We would have simply lost many soldiers,” he said. “We withdrew well and in an organised fashion and without losing even one fighter.”

Now the battle has moved from Severodonetsk to its twin city of Lysychansk, across the Seversky-Donets River, the only town in Luhansk still in Ukrainian hands.

If Russia were to take Lysychansk, it would control the whole of Luhansk, which together with the Donetsk region makes up what is collectively known as the Donbas.

“We will hold [Lysychansk] for as long as possible,” said Haidai. “If there aren’t any big losses, we will hold it.”

He added that the Russians were unlikely to end the war even if they captured the entire Donbas region. “Only force can stop Putin,” he said.

Al Jazeera spoke with Haidai about the battle for Severodonetsk and the situation in Lysychansk. The conversation below has been edited lightly for length and clarity.

Al Jazeera: The situation in Severodonetsk and Lysychansk remains tense. Can you tell us what has happened there over the last day?
Serhiy Haidai: There are very serious attacks from the Russian army on the town of Lysychansk. The attacks are coming from different sides. The town is stretched out geographically, with rises, slopes, descents; there is an [industrial zone], there are high-rise buildings – this is not Severodonetsk which is a neat square of four kilo meters by four kilometers (2.5 miles by 2.5 miles).

There’s a huge amount of weapons dropped onto people. Just today, in one day, the town has been shelled more than 150 times. It is just a catastrophe. Right now in Lysychansk, the Russian army is trying to break through the line of defence or to cut it off at Seversky [Seversky-Donets River] to encircle Lysychansk.

Al Jazeera: What about Severodonetsk? When was it taken?
Haidai: A decision was made to pull out our troops because, over several months, all the defensive structures had been shelled so much and destroyed that there was no point in holding on in one place. We would have simply lost many soldiers. So we withdrew, we withdrew well and in an organised fashion and without losing even one fighter.

Al Jazeera: How many people are left in Severodonetsk and are you worried about them?
Haidai: More than 10,000.

The town isn’t being shelled now because it was the Russian army doing the shelling. Our forces don’t shell locals. Why would we shell our own people? So I’m not worried in the sense that people are subject to danger. But the amount of shelling was huge so it’s likely that some mines that haven’t exploded are still there and that could be a big problem.

Al Jazeera: But they are in Russian hands. Are you worried about that?
Haidai: Of course, I’m worried about every person who has been left surrounded and under occupation, but for three months we were asking them to evacuate. I myself was doing this from every platform that was possible, and we did evacuate many people.

The ones left are mostly those who wanted to stay.

Al Jazeera: Why do you think they didn’t want to leave?
Haidai: Some just didn’t want to lose everything they had, their apartment or house, and some because there was nowhere to go and they were afraid – mostly elderly people who said: “We were born here, we will die here.” And there was some percentage who were waiting for the Russians.

Al Jazeera: Is it hard to believe that some people want the Russians there?
Haidai: These are exactly the people who have no motivation, who haven’t seen much in this life. They weren’t earning even the average salary so they could go to Europe and see the world. They are not motivated to grow – they are content with the concept of the Soviet Union and the legacy of it in Russia. 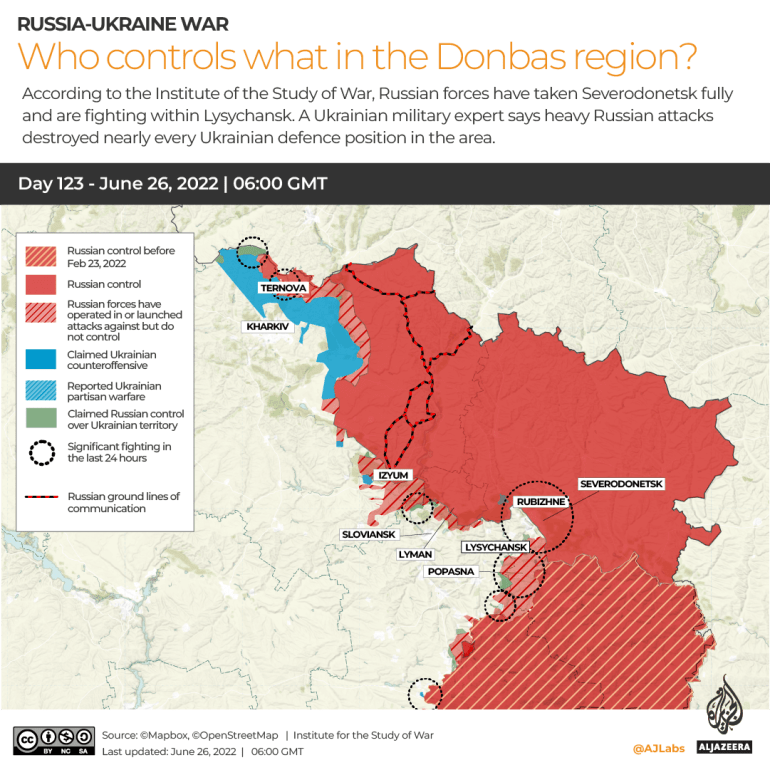 Al Jazeera: Many say the battle in Severodonetsk was similar to Mariupol – that soldiers sheltering in the Azot plant was like Azovstal. But you’ve said that it’s not the same. Why?
Haidai: The size is different. Mariupol is a huge city, Azovstal is a huge industrial complex and there is a whole underground city-bomb shelter. There is no such thing at Azot. There are a few separate places of shelter.

Secondly, Mariupol was surrounded but Severodonetsk wasn’t, so there was always a way for us to get products and supplies there.

Al Jazeera: Have all the troops that were in Severodonetsk now been moved to Lysychansk?
Haidai: Yes

Al Jazeera: And you think you will hold Lysychansk?
Haidai: We will hold it for as long as possible. If there aren’t any big losses, we will hold it. While we were holding the Russian army back in Luhansk, the Donetsk Oblast was digging in very well and was building strong defences.

Al Jazeera: The Russian army has more weapons, manpower. Why do you think it took them so long to capture Severodonetsk?
Haidai: Because they don’t know how to fight. When was the last time they fought against a strong opponent? Let’s remember. Even in Chechnya, they lost the first campaign. They just destroy everything and that’s it. That’s their tactic.

Al Jazeera: You said a few days ago that some forces were being withdrawn from Lysychansk as well. Do you think Russia can take all of Luhansk?
Haidai: It can. Unfortunately, it can.

Al Jazeera: If they take all of Luhansk, and all of the Donbas. Do you think it will stop the war?
Haidai: I don’t think so. Only force can stop Putin.

Al Jazeera: And you will try to get the territory back?
Haidai: Yes, undoubtedly. 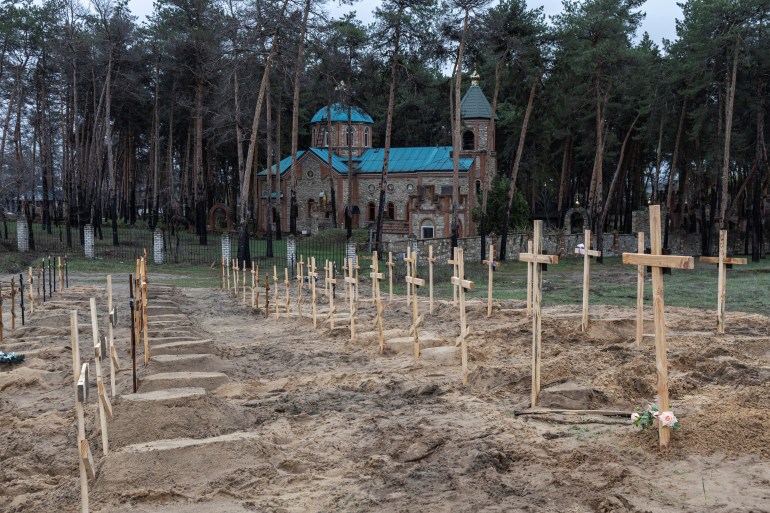 Al Jazeera: You see so much tragedy, so many people dying every day. How do you cope?
Haidai: Well there are a lot of people looking up to me. So at the moment, I can’t show my emotions. They are there, but they are very very deeply buried.

Al Jazeera: This is your home, these are your cities. When you see the destruction, how does it make you feel?
Haidai: Look, in two and half years, we have restored a lot in the Luhansk region, more than in the ten years before. So seeing all this is painful but I know we will restore it all again.

Al Jazeera: Were there any casualties in Lysychansk today?
Haidai: Yes, but we can’t even count how many because there is a huge amount of shelling.

Al Jazeera: Why do you think Russia is doing this?
Haidai: The country is the richest, with huge resources but they don’t even have a normal, decent car of their own. So they can’t make anything. And the only way they can justify this is to show that the whole world is against them, everyone is aggressive towards them and so they have to find some kind of enemy.